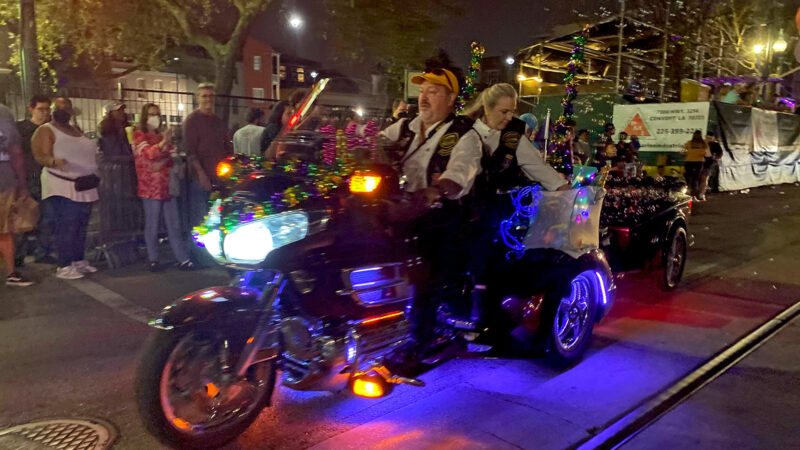 A motorcycle drives down the street in Uptown New Orleans with the Krewe Of Nyx, Feb. 23, 2022.

Mardi Gras season is in full swing in New Orleans, with parades enticing large, boisterous crowds of locals and tourists.

Earlier this week, the Krewe of Druids marched through a busy street in Uptown New Orleans along the main parade route. Thousands of people gathered Wednesday to watch participants in wizard costumes shout “huzzah,” and elves dance to festive music. Amidst all this joy, volunteers handed out flyers to remind people the COVID-19 pandemic is certainly not over and that precautions are necessary.

Two years ago, Mardi Gras made New Orleans an epicenter of the COVID-19 pandemic in the Gulf South when almost 50,000 people became infected with the virus. At the time, the potential consequences of the disease were still largely unknown. And while Mardi Gras 2021 technically wasn’t canceled, it was very stripped down due to the lingering pandemic. There were no parades, no live music and most people stayed home.

Mardi Gras this year seems like a return to normalcy, even though pandemic rules are still in place. Some parade participants who showed up to see the elves, like Tanya Bradley, have been counting the days until Carnival season.

“It’s needed. This is our outlet, and what some of us [look forward to] all year long. It’s a family thing for us,” Bradley said.

While the city of New Orleans still has an indoor mask mandate in effect, many of the people at Wednesday’s parades were not wearing masks, and some were not vaccinated. One person who wasn’t vaccinated said they felt comfortable because they’d already gotten the virus, so they felt immune.

Some people at the parade expressed criticism of city officials for sending mixed signals about protocols, spurred by Mayor LaToya Cantrell and several city council members being photographed maskless at the Mayor’s Mardi Gras Ball on Feb. 18.

Bradley, who was masked up and was fully vaccinated with a booster shot, said she felt protected, and the city’s indoor mask mandate and requirement of being vaccinated or having a negative COVID test for indoor activities made her feel even more comfortable.

“I feel safe,” she said. “People can just spread out. You can have a good time, you can be safe, but you can also be precautious.”

Currently, over 80% of adults in New Orleans are fully vaccinated and the rate of new COVID cases in New Orleans has dropped significantly from a peak in January. But with Mardi Gras drawing in tourists from across the country, city health director Jennifer Avegno said the Carnival season is still considered to be a high-risk event.

In an interview with WWNO, she talks about why she thinks the city is prepared.

Q: Mardi Gras was kind of the epicenter of where COVID-19 started in the South in 2020. How do you feel about Mardi Gras happening this year?

AVEGNO: Nobody remembers those days after Mardi Gras 2020, I think, better than me, unfortunately. You know, the good news is we are in a much better place than we were two years ago. We really knew next to nothing about the virus or what it would become. We had no tools to detect it and we had no tools to fight it at our disposal. So, we were completely vulnerable. And so, while Carnival didn’t start the pandemic in the United States, it is unquestionably an event that sparked an awful lot of infections and deaths. And, you know, nobody wants to repeat that.

And so, fortunately, we have far more knowledge than we used to. We have detection systems and we have ways to protect ourselves from a high-risk event. So, I feel encouraged and glad that we seem to be out of the worst of the Omicron surge here locally.

Q: What have you discussed with hospital systems to be prepared?

AVEGNO: Generally, the highest call volume happens during Carnival, so it is already a big event and our hospitals have been very good in the past — just preparing for that usual Carnival-related surge. Whether it’s folks who have indulged too much, or who get sick, or who trip on a curb the wrong way, or get whacked in the head with a bag of beads. Carnival is a little trickier now with COVID again. Fortunately, we’re in a much better place, in terms of hospitalizations, than we were. We’re definitely in a better place.

Q: Do you think that staffing will be an issue? I know that’s been a problem across the South.

AVEGNO: Well, that’s a problem across the country. Health care workers are leaving, taking a break, going elsewhere in really large numbers, and that is affecting every health system across the country. It has affected us significantly. Here, it is slightly improved, but we are definitely not out of the woods and that’s a chronic problem.

Q: So what type of protections would you say the city has put in place? New Orleans has one of the highest vaccination rates in the country, so that must be comforting? But, obviously, there are people from very under-vaccinated states, like Mississippi and Alabama, that typically come into Louisiana.

AVEGNO: Yeah, we’ve been planning for this since the summer. We started bringing in the CDC and other national, state and local public health folks because we really wanted to make sure that we did it right. When we did the Krewe of Boo COVID-19 pilot study (where the city studied the impacts of a Mardi Gras type event), the conditions were the same as they are now. We had relatively low viral transmission, low percent positivity. We had an indoor mask mandate. And we have had a vaccine test requirement and that proved to be successful in that we didn’t have a big outbreak from that parade. Those measures also worked in settings like Lollapalooza in Chicago. So, that’s always been our plan and that protects both the locals and those coming to visit us.

We were well aware that many of the folks who are coming to visit us are going to be from places where the overcrowding levels are higher than they are here. And the overall vaccination and mask-wearing adherence is lower. So, we need everybody to have the same standard, and it might be a higher standard than some of our visitors are coming from. We are on the parade route giving out tests. We were able to get a pretty good supply of at-home tests so that people can test, you know, a couple of days after they go to the parade, before they go to the ball, after Mardi Gras is over when they’re ready to go back to work.

Q: If people can, do you think that they should try to stay home from work after Mardi Gras?

AVEGNO: Yeah, that’s kind of the nice thing about Carnival. Most kids have off the entire week, so it’s kind of like a built-in quarantine period. Everybody goes home.

I would recommend that if you’ve really been out doing a lot of things, putting yourself at risk of transmission, then you should stay home if you can. We know many of our workers can’t, so they can come get one of the rapid tests that we have and test the day after Mardi Gras or a couple of days later.

Q: So, people can’t go to restaurants in New Orleans unless they’ve tested negative for COVID or they’ve gotten vaccinated. So you can come, but you’re not going to really be able to do anything fun, right?

AVEGNO: So, the vaccine test requirement applies to those higher-risk activities —so, if you’re going to a restaurant or you’re going to a bar. If you are going to an indoor event, attending a ball or a big party or something like that, then you’ll have to show proof of vaccination or a negative test. And on top of that, we have an indoor mask mandate anywhere that is indoors.

We have a big communications campaign. There are billboards coming from every direction on the interstate into the city. We’ve done a ton of social media. I am sure there will be some people who don’t pay attention and they show up and are surprised by that requirement. But we’ve really been working for weeks and weeks to make sure nobody was surprised. So if you get here and you don’t have a test and you know you’re not vaccinated, we have testing spaces that are going to be open pretty much every day.