Fed up with Jackson’s water system, this Mississippi suburb wants to create its own 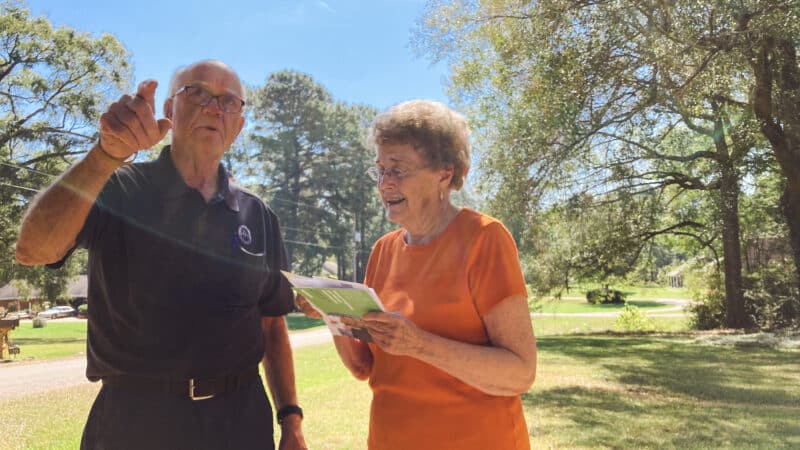 Byram Mayor Richard White (left) speaks with resident Mildred Cochran about a leak in the street outside of her home, Oct. 7, 2022. Cochran says the leak has been ongoing for months but is not able to be fixed by anyone locally since the City of Jackson owns and maintains the town’s water infrastructure.

How do you solve a problem like Jackson, Mississippi’s ongoing water crisis?

For some, the answer is to break away and start over with their own system. Most hospitals in Jackson did so years ago, and Jackson State University’s president has talked about the historically Black university creating its own independent system in the state’s capital. Now, the Jackson suburb of Byram, Mississippi wants to do the same

“I have a problem with spending half my time with water I don’t even own,” said Byram Mayor Richard White.

But this goes against the national, but slow, trend of water utilities partnering — not breaking — up. Experts say merging water systems makes them more efficient, curtailing the constantly rising cost of maintaining the pipes.

Bringing the Jackson region together for one, big water system could help cover the city’s underfunded pipes. But frustration and distrust between the metro’s cities are putting cold water on any hopes of teamwork.

Mildred Cochran has a lot of pride in Byram. Residents say this town of 12,000 was little more than farmland decades ago and has since grown by about 68% over the past 20 years. It even has a Walmart now — a small-town sign of success.

But Cochran’s love does not extend to her former home of Jackson, which owns and maintains the water infrastructure in Byram.

The capital city’s aging water infrastructure has plagued Jackson and Byram residents for decades, often leaving many with a contaminated water supply and low water pressure. Recently, more than 150,000 people were left without safe tap water for over a month. Jackson has been unable to keep up with needed water maintenance within its own city limits — let alone for the Byram and county customers it also services.

It’s this maintenance — or lack of it — that’s been a problem for Cochran. A steady rise of air bubbles shows the leak outside her home still hasn’t been fixed months after it started. The puddling water has eroded the street and, at times, she can hear the water gurgling.

Combine Jackson’s failure to fix the leak outside the home with the city’s high rate of violent crime and she wants no association with Jackson.

“Don’t tell people I live in Jackson,” Cochran said she told her sister. “Tell them I live in Byram.”

Byram’s icy relationship with Jackson goes beyond water. The two engaged in a long legal fight starting in 1997, with Jackson wanting to annex the city and Byram wanting independence. They eventually settled on a deal securing Byram as its own city in 2006. One of the last major strings attaching the two, beyond geography, is the water system owned by Jackson.

While Jackson’s water troubles do trickle into Byram, most of the city uses well water — still maintained by Jackson — leaving many residents unaffected by issues like the recent boil water notice. Still, some residents and businesses rely on Jackson’s surface water and are more likely to deal with frequent alerts about the water being unsafe to drink.

But Byram Mayor Richard White said maintenance problems are spread throughout his town, regardless of the water’s source.

“They’ve been kicking the can down the road so many times they can’t find the can anymore,” White said of Jackson’s water system.

White is one of the main advocates for pulling Byram off of Jackson’s water system and starting its own. To achieve this, he’s pitched a $26 million plan that includes four wells and a water tank to kickstart the system.

While that’s a steep price tag for a town with less than 13,000 residents, White points to state and federal dollars that could be tapped. The Bipartisan Infrastructure Law, for example, provides $429 million over five years for water infrastructure improvements in Mississippi, the White House estimates.

Cooperation, not separation could help

While Byram focuses on separating to solve its water woes, another idea has also been floating around — teaming up.

Water utilities across the country have been moving in this direction for decades, including in the Mississippi Delta. The idea boils down to simple math: The fewer customers on a water system, the more each person has to pay to properly maintain it. The U.S. has more than 50,000 water systems with many serving fewer than 10,000 people, according to the US Water Alliance. The industry also suffers from staffing shortages, which is one of the factors blamed for Jackson’s water crisis.

The math also works the opposite way: prices go down — or at least mitigate rising water costs — the more customers are put on a single system. Merging systems often require less staff, which can help alleviate this problem too.

For these reasons, Alabama has cut its number of water utilities in half over the last 30 years, according to regulators. The Louisiana Public Service Commission doesn’t track all the water providers in the state, but does regulate private water companies – and the number of those has been shrinking due to mergers as well.

Last month, the Greater Jackson Chamber Partnership sent a letter to state, county and city lawmakers supporting a regional utility model for the Jackson area — essentially, Byram and the parts of the region’s counties that receive water from the capital city would all get a voice in governing the water. The state would also get a say.

But a regional approach would have a more significant impact by bringing on board other suburbs with their own water systems. But why would those cities — free of Jackson-level water concerns — choose to take on Jackson’s problems? Andre Perry, a senior fellow with the Brookings Institute, argues it’s about securing the economic growth of the region. Since Jackson anchors the metro, all the nearby cities are hurt when Jackson can’t recruit or keep big employers because of issues like water.

“So many opportunities are lost because people are willing to cut their nose to spite their face,” Perry said. “As Jackson goes, so does the rest of the state.

Distrust getting in the way

Regional growth may sound good, but White said Jackson’s already had opportunities to address its water problems and hasn’t. At this point, his priority is guaranteeing clean water to his residents, even if breaking off would ultimately hurt Jackson.

“That’s not my problem. My problem is Byram, Mississippi,” White said. “We have water out in our city almost monthly.”

Jackson Mayor Chockwe Antar Lumumba has also signaled his distrust of a regional water authority. During a live-streamed interview with the Poor People’s Campaign, Lumumba was skeptical that any regional authority would be willing to take resources from the richer, whiter suburbs and divert them to the area that needs it most — Jackson.

The distrust also extends to the relationship between Jackson and the state. Recently, Gov. Tate Reeves accused Jackson of ending its cooperation with the team managing the water crisis. Lumumba pushed back against the claim and essentially accused the governor of reaching for headlines instead of real solutions.

Monday Agho, owner of the restaurant Monte’s Steak and Seafood in Byram, blames these political divisions for leading to problems like the Jackson water crisis.

Like a lot of people in the region, Agho has connections to both Byram and Jackson. After immigrating from Nigeria, he went to Jackson State University. He said the state isn’t giving Jackson the support or resources it needs.

“They’re supposed to concentrate their money on the capital city. But in this situation, the infrastructure is running down. Everything is run down,” Agho said.

Juanita Shepphard grew up in Jackson and came back to the area to retire, ultimately settling in Byram with her husband. Whether it’s a regional approach or splitting the water system apart, Shepphard just wants a solution that can help both cities.

“If we have to split off in order for it to get fixed I’m okay with it,” Shepphard said. “I just want us all on the same page and working toward the same goal.”