American b-girl wins silver at The World Games. Hopeful for the 2024 Olympics 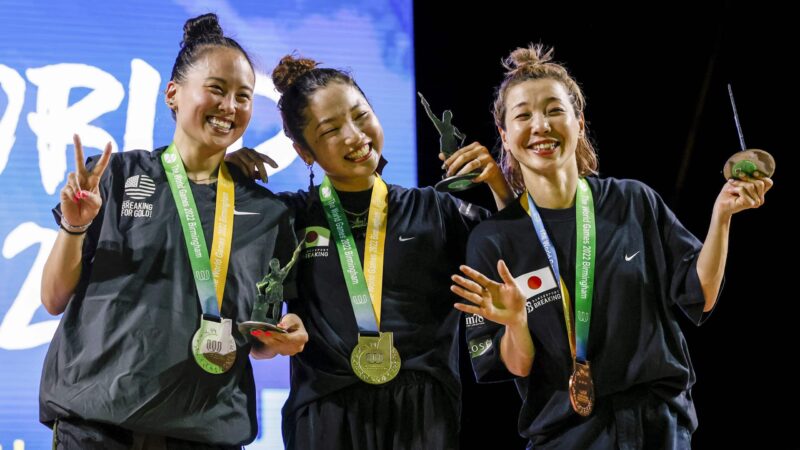 Growing up in Kentucky, Sunny Choi said she never would have imagined herself breaking on a world stage.

Now she’s the first silver medalist for breaking in World Games history. It’s the sport’s first year in the Games. On Sunday, Choi went head to head with 15 other b-girls from around the globe. Ayumi Fukushima from Japan took the bronze and Ami Yuasa, also from Japan, earned gold.

Choi said it was kind of an accident when she started breakdancing. It was her freshman year of college in Philadelphia and she was looking for a physical and creative outlet.

“I was out really late at night one night and some guys were dancing outside on the street and they were just waving people down like, ‘Oh, hey, come,you know, to one of our free classes.’ And I was like, ‘Okay, why not?,’” Choi said.

She said she fell in love with it right away and almost 15 years later the 33-year-old is still devoted to the sport.

“I feel like it’s not only a good thing for me in terms of being able to express myself and let loose,” Choi said. “But it’s also just really helped me grow as a person. And I feel like I’m just like a kinder, nicer, more understanding person after all of it.”

To stay in shape for competitions, Choi practices 4 times a week, in addition to weight lifting, yoga and sprint training—all on top of her day job as a creative operations director at Estee Lauder in New York, managing marketing and productivity.

In some ways, she said, it’s like having a superhero alter ego. She trades in her baggy performance clothes for business casual.

“I’ve had people reintroduce themselves to me when I’ve changed because they just didn’t realize it was me. It’s pretty funny,” Choi said.

But now, she may have to get used to a higher profile. In 2020, the International Olympic Committee announced that breakdancing will be included in the 2024 Paris Olympics and Choi said she hopes to get there.

When she was a kid, she had dreams of competing at the Olympics as a gymnast, but after a sport-related knee injury she decided to hang up her leotard and that dream.

“And here I am in my thirties thinking, can I go to the Olympics now?” Choi said. “It’s so cool to now have that opportunity as an adult again and then this time actually be able to make that decision and potentially see it through.”

Choi’s injured knee still gives her problems when dancing. She self-manages using a compression brace and icing it when it’s painful. But she says it’s worth it because breaking gives her the freedom to create and move.