After years in a museum exhibit, Alabama is giving Native Americans their cultural items back 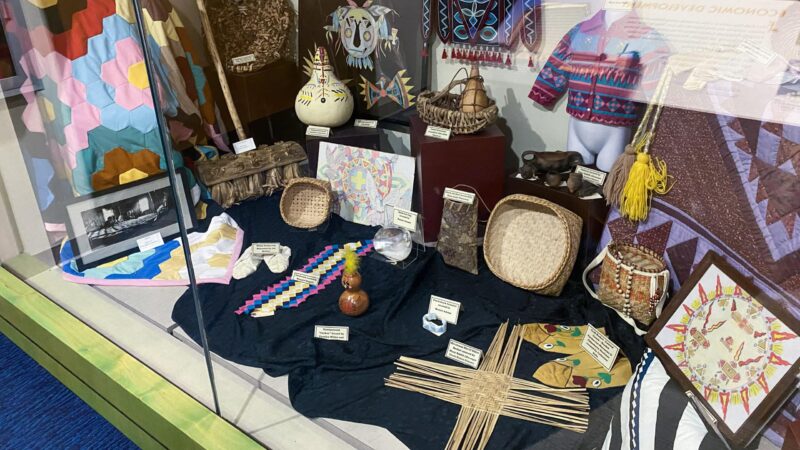 A mix of modern and historical objects line display case at the Poarch Band of Creek Indians museum in Atmore, Alabama, Nov. 28, 2022. A special feature of the museum is the tribe of people you’re learning about are the same people leading the museum.

The Alabama Department of Archives and History paints an impressive picture. Giant, white columns and neoclassical architecture rise above groups of elementary school students excited for a field trip in early November.

“This is literally a stop for pretty much every fourth grader in the state and has been for a really long time,” Kellie Bowers said. “This is the hub of Alabama history.”

Lately, Bowers said some people have expressed concerns over a piece of that history no longer being on display — ”The First Alabamians” exhibit.

Tall boards now block the exhibit, which is one of the first that visitors can see when walking into the museum’s main entrance. Opened in the early 2010s, the exhibit showed the life of Native Americans in Alabama.

But in 2018, at the request of interested tribes, the department realized that most of the objects on display were funerary objects — or items found in graves — and many were taken without proper permission.

That’s when Bowers stepped in. Soon after the discovery, she was hired as the coordinator for the Alabama Archives’ Native American Graves Protection and Repatriation Act project, or NAGPRA — a federal law that requires public institutions to return cultural objects in Indigenous America. A NAGPRA team was also hired to help complete a full inventory of the items at the museum, establish relationships with tribes and start the process of giving things back — which can take years.

Currently, the department has disclosed it has over 100 sets of human, or ancestral, remains and tens of thousands of funerary objects including beads, pottery and clothing.

Bowers said the Alabama Archives have strived to be transparent about removing objects from the display. The currently closed exhibits have signs that explain why it’s closed, what the future of the exhibit will look like and more.

“In speaking to my own children about this, when they ask me what I do at work, what I say is: Sometimes you do something wrong. And when you realize that you’ve done something wrong, you do everything that you can to make it right,” Bowers said. “And when you have something that doesn’t belong to you or that should belong to someone else, you do whatever you can to give it back. And it’s as simple as that.”

Bowers said the Alabama Archives is redesigning the exhibit and wants to include indigenous voices from across the country to strengthen its educational value.

“I am envisioning it being enhanced by Native American storytelling and voices in a way that it currently isn’t,” Bowers said. “Right now it’s fairly textbook in that the information is displayed just very matter-of-fact. And I think something that we’re going to see is a more nuanced native voice that’s going to enhance that original storytelling.”

She envisions the finished product looking something like the exhibits at the Poarch Band of Creek Indians Museum in Atmore, Alabama. It’s a small museum — nestled between acres of farmland and one of the state’s few gaming halls — but it’s packed with the rich history of the Creek people in Alabama.

As the museum’s coordinator, Chunn frequently leads tours highlighting her tribe’s history from pre-colonial times to the present. She said this museum is important, especially in Alabama, because it lets people know who shaped the land and details the resilience of Poarch Creek people — the only federally recognized tribe in the state.

Since the NAGPRA process started, 18 tribes have been working with Alabama Archives. One is the Eastern Band of Cherokee Indians in North Carolina, where Miranda Panther oversees NAGPRA.

Panther said working with the Alabama Archives has been a good experience, but other state institutions still have a long way to go.

“The state of Alabama is really difficult,” Panther said. “We have had the highest incidences of looting in that state over the past few years. And it’s always been difficult — through public education and outreach — to change community members’ minds about why it’s not appropriate to collect or kind of scavenge for what they would call arrowheads or projectile points or other objects.”

Sometimes those objects or human remains found in graves are used in scientific research for studies that haven’t been approved. In many cases, they weren’t donated to science but were taken instead.
Whether it’s an object dug up by a private collector or part of an archeological dig — the end result is the same.
“Once it’s gone, you can’t get it back. And cultural resources are nonrenewable,” Panther said. “So if they’ve been destroyed or collected, you know, not only does that not provide any cultural context for tribes, for interpretation and knowledge, but it’s just gone.”

Panther said she and her colleagues have been trying to get state institutions to instate research moratoriums once they start the NAGPRA process. She also wants more institutions to ensure they include Native American people in the process because NAGPRA isn’t just about following a federal law — it’s a human rights issue.

“I really think that we’re turning the tide in the professional realm of getting more people on board with taking objects off display, making sure that research isn’t occurring without the appropriate tribal people’s permission, and really moving towards not only being compliant with NAGPRA, but even being proactive,” Panther said.

What the Alabama Archives is doing is a good example of what should happen across the Gulf South, Panther said. What are now Alabama, Mississippi and Louisiana are the ancestral homelands for many Southeastern tribes, but most of those tribes were forced to move further west during the Indian Removal Act.

“I think that [Alabama will] probably always be one of those states simply because they were a huge landmark for us in our homeland,” Deanna Byrd, the NAGPRA coordinator for the Choctaw Nation of Oklahoma who has worked with the state of Alabama for years, said. “So, you know, Mississippi, Louisiana, Alabama will probably always remain open because we work with federal agencies on a regular basis down there.”

So what happens when tribes get their objects back?

Byrd said for many tribes, that’s private. For one, certain ceremonies are part of closed religious practices, but tribes also don’t want to give people information that could lead to looting.

Byrd said working on repatriation has its ups and downs; when it’s good, it’s exciting to make connections and progress with different institutions — and it’s gotten better over time.

“When I took this position in 2015… I visited with many elders that had this role before, both in our tribe and other tribes. I heard a lot of really horrendous stories,” Byrd said. “I was a little scared, to be honest, because I didn’t know the climate. Over the course of the time that I’ve served in this role, I was really pleased to understand that it’s completely different.”

But sometimes it weighs on her.

“There’s days where it’s a little bit more heavy when you have to make a… decision about something that you were never really intended to make,” Byrd said.

Like how to care for someone’s ancestors. But even when it’s heavy, Byrd said there are gratifying parts of the process, too.

“We pray with these ancestors and we do all of the legal paperwork—the admin stuff. But there’s also a spiritual component,” Byrd said. “And so it’s very rewarding and there’s a sense of joy and being able to keep that promise that they’re going to be able to find peace again.”