Why Alabama Lawmakers Just Won’t Give Up The Grocery Tax 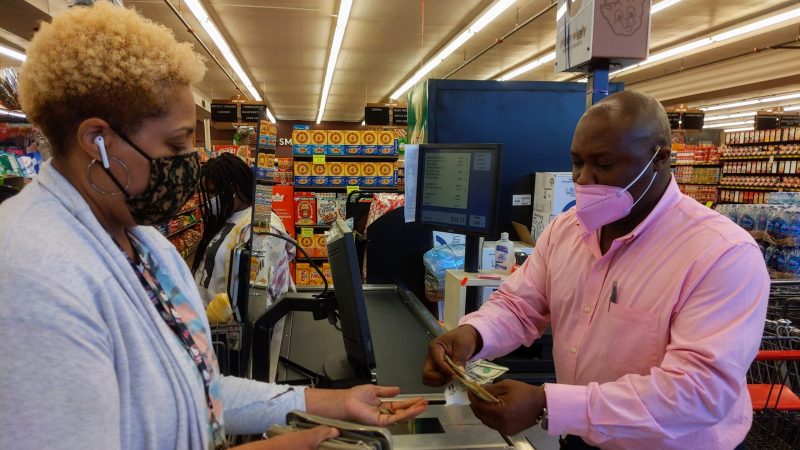 Eboni Mincey pays for her groceries at a Piggly Wiggly in Birmingham, Ala.

Legislative sessions most years bring a bipartisan chorus decrying the grocery tax as a cruel burden for low-income families, who are disproportionately people of color. And yet, the tax remains untouched in Mississippi and Alabama.

Along with South Dakota, those states are the only ones charging the full sales tax rate on groceries used for home cooking, from vegetables to flour to even baby formula.

“We exempt food for farm animals, but we don’t exempt food for babies,” said Chris Sanders, the communications director at Alabama Arise, a nonprofit advocacy organization. “It offends me, quite honestly.”

Alabama regularly puts in an effort to dispel or cut the tax. Mississippi tried and failed to cut it in half this year. Part of the reason it’s so tough to ditch the grocery tax: It brings in a lot of money. In Alabama, the tax raises about half a billion dollars for the state’s education fund. That broad support for repealing it often splinters when policymakers have to figure out how to make up for the hundreds of millions of dollars in revenue.

Louisiana managed to ditch its grocery tax 18 years ago, but that move also offers lessons on what can go wrong.

Economists often label grocery taxes as regressive since food makes up a larger portion of low-income families’ budgets. For many shoppers, eliminating the grocery tax could help them buy an extra gallon of milk or two each week. For low-income shoppers, it could be what keeps them ahead of rent.

“I could take it and help on another bill,” said Earnestine Orr after paying $5.63 at a Birmingham Piggly Wiggly. “Like on this high light bill.”

People don’t have to pay taxes on the food they get through the federal Supplemental Nutrition Assistance Program (SNAP). But programs like this rarely cover all of a person’s groceries and plenty of low-income Americans are left out.

“For those people who are outside of that system who are needing that support, they’re paying this grocery tax,” said Norbert Wilson, a professor of economics and food at Duke University. “Those are the individuals I’m most concerned about in this.”

Mississippi taxes groceries at its full sales tax rate of 7%, but it prevents local governments in most cases from adding any additional tax. In Alabama, the average state and local sales tax rate is 9.2% according to the Tax Foundation, though that varies across the state.

Some politicians, like Mississippi Gov. Tate Reeves, say the grocery tax is fair. But there’s bipartisan support for losing the tax. During this year’s legislative session, the Mississippi House voted in support of a tax overhaul bill that would cut the grocery tax in half over five years. But the Senate said it needed more time to study tax issues over the summer.

“In the Mississippi Legislature, rarely do things get through the first year you try,” said Beth Orlansky, the advocacy director for the Mississippi Center For Justice. “It’s a step in the right direction.”

Alabama put together a task force to study the tax in 2017 but that has yet to lead to any change.

Louisiana was successful in getting rid of its grocery tax back in 2003. The man who made that happen was ex-lawmaker Vic Stelly.

Stelly managed to not just cut the grocery tax, along with drug and utility taxes, but pay for it. His plan, appropriately called the Stelly Plan, raised the income tax to make up for the lost revenue.

“If you were on the higher end on the income scale you were paying more tax,” said Greg Albrecht, the chief economist for the Louisiana Legislature. “Everyone knew he was going to be paying more taxes too.”

But the Stelly Plan didn’t last. While the grocery tax cut had been approved as a constitutional amendment and remains untouched to this day, Louisiana Gov. Bobby Jindal repealed the income tax hike in 2008.

That led to a budget hole, which lawmakers solved by raising the sales tax in 2016 on just about everything but groceries.

Today, it’s unclear if low-income families in Louisiana are saving any money. But that’s the scenario some economists warn about when cutting the grocery tax – it doesn’t help families if their wallets get hit somewhere else.

“The most neutral solution is just to keep the sales tax as low as possible,” said Katherine Loughead, a senior policy analyst with the Tax Foundation.

This story was produced by the Gulf States Newsroom, a collaboration between Mississippi Public Broadcasting, WBHM in Birmingham, Alabama, WWNO in New Orleans, Louisiana and NPR.