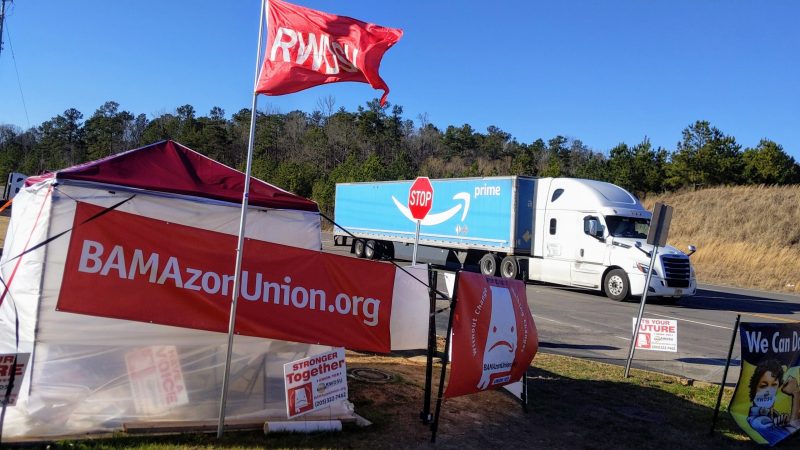 An Amazon truck drives past a tent set up by the Retail, Wholesale and Department Store Union.

The vote on whether or not to unionize the Amazon warehouse in Bessemer, Ala. may seem like a once-in-a-lifetime chance for a big union win in the South. Yet union organizers had an almost identical opportunity just four years ago in Canton, Miss.

Back then, Nissan assembly plant workers attracted global pro-labor support. But similar to Amazon, Nissan pushed back hard, determined to keep a union off its floor.

What happened in Canton, in other southern union elections and in the four years since can give us clues about what to expect from the Amazon vote.

Amazon’s nearly 6,000 workers in Bessemer have until March 29th to mail in their vote on joining the Retail, Wholesale and Department Store Union. Amazon opened the new fulfillment center to employees exactly one year prior. If a majority of workers vote yes, this would be Amazon’s first union in the United States. Advocates hope that will lead to more Amazon job sites unionizing. The company argues they already offer excellent health benefits and pay, which would just be cut into with union dues.

The pay wasn’t a major factor in either the Amazon or Nissan union campaigns. The Canton plant paid more than $26 an hour for some veteran workers. Amazon pays its Bessemer employees at least $15, almost double the minimum wage.

Instead, both were motivated by working conditions. Pro-union Amazon workers complain about high packaging quotas and strict limits on breaks. Nissan workers said many jobs were unsafe, claiming hundreds of injuries occurred at the Nissan plant each year.

The push in 2017 attracted national headlines, and visits from politicians and celebrities, like Vermont Sen. Bernie Sanders and actor Danny Glover. Those same folks also showed their support to workers in Bessemer.

The push in 2017 attracted national headlines, and visits from politicians and celebrities, like Vermont Sen. Bernie Sanders and actor Danny Glover. Those same folks also showed their support to w

Nissan workers in Paris also added their voices in support.

“It just felt like … the world was on your side, and you were doing the right thing,” said Morris Mock, a technician at the plant.

But cheers for a union from the outside couldn’t compete with anti-union messaging inside the plant.

Also similar to the Amazon warehouse, Nissan held mandatory meetings meant to discourage workers from voting in favor of joining the United Automobile Workers union. Anti-union signs were posted across the plant and TVs played messages telling workers to vote no. Nissan did not respond to a request for comment.

“They’re able to change the narrative in every meeting, and they can talk to every worker in a split second,” Mock said.

Workers were also divided by race. In her book The Sum of Us, Heather McGhee writes that Black workers had the most dangerous, labor-intensive jobs. McGhee quotes one Nissan worker who said people where he lives think unions are just for “lazy Black people.”

Those holding the toughest jobs were often temp workers, who were exempt from voting.

“You go to certain areas where it’s easier and they’re not doing the physical labor … there’s a majority of white people working that area,” said Travis Parks, a white production technician at Nissan.

Workers were also skeptical about joining a union being investigated by the FBI at the time for corruption. At the same time, Mock said Nissan made promises to improve work conditions without union involvement.

“They say well, you know us,” Mock said. “Look at them. You don’t really know them.”

The promises and anti-union talk worked. Of the 3,700 Nissan workers eligible to vote, about 2,200 voted against the union. The effort failed nearly two to one.

“You got workers all over the world showing solidarity with you, but in the Deep South it’s still hard to organize,” Parks said.

Mock said after the vote, the promised improvements at the plant disappeared and the workers still deal with the same issues they had four years ago.

“The only thing we got out of that union vote was a bathroom that was painted,” Mock said. “And they claim that some of the workers wanted a new speaker system for the managers to use to talk to the workers. That’s pretty much it.”

The high-profile loss at Canton could make it seem like it’s impossible to unionize in the South.

But union victories can and do happen in southern states every year. Union membership has actually been slowly ticking up in Mississippi and Louisiana over the past decade. Alabama has a higher membership rate, but it’s seen a decline. Since 2012, workers approved joining a union in nearly 70% of elections in the three states.

Most of these wins don’t come from massive job sites with thousands of workers, like the Amazon warehouse in Bessemer or Nissan plant in Canton. They usually happen at workplaces with fewer than 100 workers.

Campaigning to unionize gets expensive, especially at bigger sites. It can cost as much as $2,000 per worker, according to Wade Rathke, the chief organizer of United Labor Unions Local 100 in New Orleans.

“You got phones. You got computers. You got the interweb. All the swag,” Rathke said. “Oh my God. When does it end?”

Unions today often have less cash to wage these battles due to the national decline in union membership and “right-to-work” laws, which make it so workers don’t have to pay union dues even if they’re represented by one. The U.S. of Representatives recently passed a bill that would override those state laws.

Still, unionizing a big employer is possible. It happened in 2012 at a Pilgrim’s Pride poultry plant in Alabama. Its close to 1,200 workers voted to join the Retail, Wholesale and Department Store Union – the same union the Amazon employees in Bessemer will vote on joining.

“The fact that you have people who organized in the poultry industry who are now up in Bessemer fighting on behalf of this vote, I think is very significant,” said Natasha Zaretsky, a professor of history at the University of Alabama at Birmingham.

‘An Era Of Movement And Change’

Organizers and labor experts agree – the odds are against a union getting into Amazon’s Bessemer warehouse. But those same experts point to a couple of recent shifts in favor of unions.

The pandemic has been a major factor. Jobs that used to be primarily labeled as “low-skill” are now hailed as “essential.” That’s helped unions recruit new members.

Then there’s the political shift. President Joe Biden recently tweeted a video where he spoke out against anti-union tactics. He did not specifically mention Amazon. But labor experts describe his statements in support of the right to unionize as possibly the most pro-union remarks ever uttered by an American president.

Workers in Alabama – and all across America – are voting on whether to organize a union in their workplace. It’s a vitally important choice – one that should be made without intimidation or threats by employers.

Every worker should have a free and fair choice to join a union. pic.twitter.com/2lzbyyii1g

“We’ve never really had a sitting president, I think, in history who had such clear, direct support for an ongoing labor campaign,” said John Logan, the director of Labor and Employment Studies at San Francisco State University.

Movements like Black Lives Matter have also led organizers to believe they have a better shot unionizing today than during the failed Nissan campaign from four years ago.

“This is the era of movement and change, and people are boldly coming out of their shells,” Mock said. “That’s the difference.”

Mock still has hope that the plant in Canton will come up with a successful union vote in the future.

Correction: A previous version of this story incorrectly stated that Sen. Bernie Sanders visited Bessemer, Ala. He sent pizza to a rally there in February. He will visit Birmingham to meet with workers March 26, 2021.