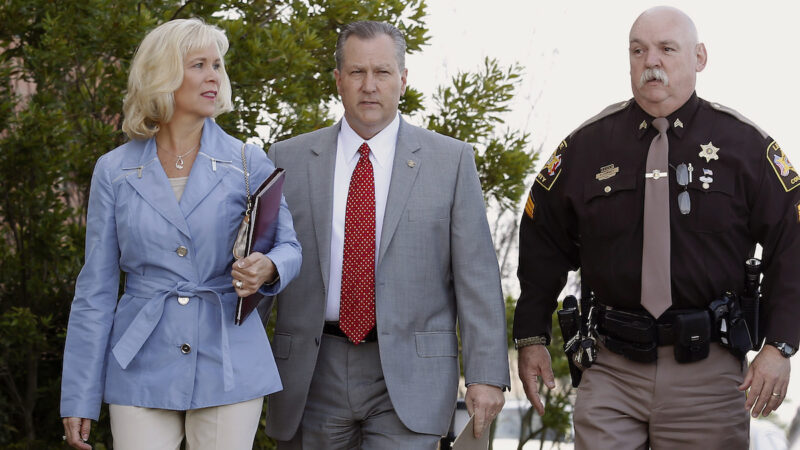 This photo from 2016 shows former Alabama Speaker Mike Hubbard and his wife, Susan Hubbard, walking to the Lee County Justice Center for his ethics trial.

MONTGOMERY, Ala. (AP) — Convicted former Alabama House Speaker Mike Hubbard told people he was innocent and “held my nose” as he signed a letter apologizing for his crimes, according to state prosecutors who used Hubbard’s own phone calls and emails from prison to cast doubt on his claims of remorse as he seeks early release.

The attorney general’s office combed through emails and 600 of Hubbard’s phone calls from prison and cited some of the conversations as they oppose his request for early release from prison. State attorneys said the communications show he was “not truthful” when he signed a letter apologizing for his 2016 conviction for violating state ethics law, including using his public office for personal financial gain.

Hubbard submitted the letter in September along with a request for early release from prison. In the letter, Hubbard said, “I recognize and admit my errors.” Hubbard wrote that his conviction embarrassed the state and his family and “for this, I am severely sorry and respectfully ask forgiveness from everyone affected.”

Prosecutors said Hubbard also talked to friends about efforts to add language to a community corrections legislation that could benefit his release. According to state lawyers, Hubbard told an attorney that someone should contact a state senator to urge a filibuster. The court filing did not include many specifics but said that Hubbard did not get his wish.

The former House speaker also referred to the lead prosecutor in his case as corrupt, suggested politics was behind his prosecution and was baffled that the Alabama Supreme Court did not completely overturn his conviction.

“I hope the folks there know I didn’t do anything wrong, and this was just a political hit job,” Hubbard told one friend according to the court filing. He told another that, “according to the way they’ve interpreted the law, they could indict and convict anybody in the Legislature who has a job.”

Phone calls made by prisoners have a message at the beginning informing recipients that the call may be monitored. State lawyers said Hubbard must have been aware of this because he used a variety of code names such as calling his wife the quarterback and state officials either Martians or the Taliban.

Hubbard has served about one year of a 28-month sentence. He is imprisoned at Limestone Correctional Facility.

Prosecutors accused Hubbard of leveraging his powerful public office to obtain clients and investments for his businesses, violating the prohibition against giving a “thing of value” to an elected official. His defense maintained the contracts were legitimate work and unrelated to his position as House speaker.

In upholding the conviction this spring, justices noted that when contacting a company for one client, Hubbard “identified himself as a state legislator and as Speaker of the House of Representatives.” They also noted how one company executive wrote in an email that Hubbard could get the company, “in front of any speaker in the country regardless of party.”

The Republican was one of the state’s most powerful politicians until the ethics conviction in a corruption case ended his political career. Hubbard, the architect of the GOP’s takeover of the Alabama Legislature in 2010, was a legislator from Auburn and former chairman of the Alabama Republican Party. He was elected House speaker soon after Republicans won control.