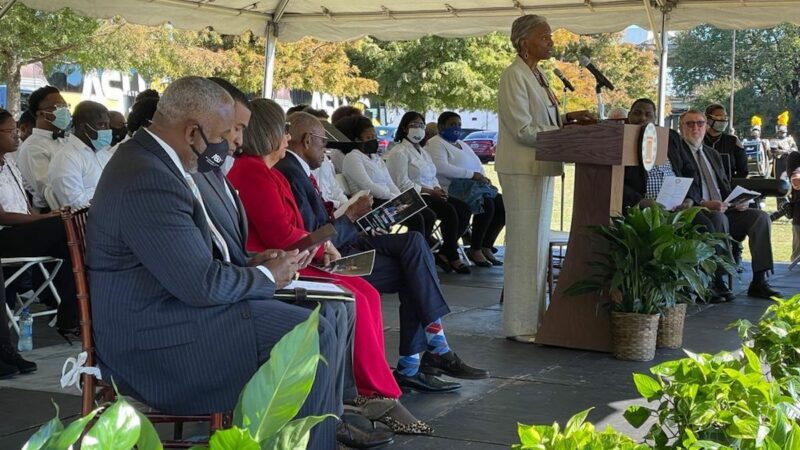 Dedication ceremony for the renaming of Jefferson Davis Avenue in Montgomery.

Today in Montgomery, Ala., a street got a new name and a fresh start. Jefferson Davis Avenue, named after the first president of the Confederacy, is no more. It’s now named after famed civil rights attorney Fred Gray. Troy Public Radio’s Kyle Gassiott reports that Gray was honored for his landmark work, including his first case.

KYLE GASSIOTT, BYLINE: As crowds assembled today on the newly named street in downtown Montgomery, a choir and a marching band from Alabama State University performed. During the ceremony, Gray, who is now 90, took time to remember the pledge he made as a teenager and student at school.

FRED GRAY: I decided I would try to do something about segregation and made a commitment to do everything I could do to destroy segregation wherever I found it.

GASSIOTT: Gray would go on to litigate some of the most important cases of the civil rights era, including those related to the 1955 Montgomery bus boycott. Among his clients were Rosa Parks and Martin Luther King Jr. Montgomery’s mayor, Steven Reed, the city’s first Black mayor, introduced Gray. It was Reed’s proposal to rename the street after Gray, who lived most of his young life on it.

STEVEN REED: We’re changing the name of someone who should never have been honored to someone long ago should have been recognized and honored not just by this city but by this state and this nation.

GASSIOTT: Changing the name of the street violates the 2017 Alabama Memorial Preservation Act. That was put in place by the Republican-led legislature after Confederate monuments were removed. Violating the act could mean a fine of $25,000. Reed says after he proposed the name change, donors from around the country stepped up to say they would cover the fine if that happens. Gray said he was accepting this honor on behalf of his first civil rights case and client, Claudette Colvin. Nine months before the arrest of Rosa Parks, Colvin was cited for the same violation of refusing to give her bus seat to a white passenger. Today, Gray celebrated her achievement.

GRAY: Who, at 15, did the same thing that Rosa Parks did without the knowledge, without the experience that she had. But she was able to do it.

GASSIOTT: At the time of her arrest, Colvin was made a ward of the state and placed on indefinite probation. Today, at 82 years old, she filed papers in Montgomery to have that expunged. Her former attorney, Fred Gray, was right there by her side.