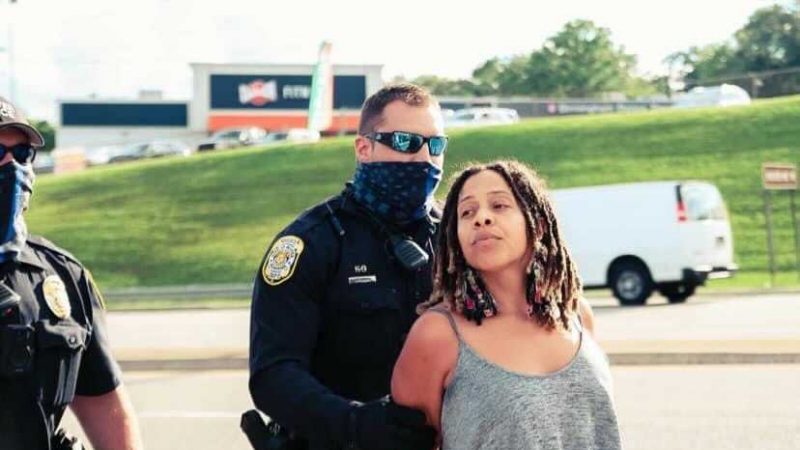 Community Organizer Celida Soto arrested by Hoover Police during a protest on July 28, 2020.

A Republican lawmaker wants to crack down on rioters after a protest in Birmingham turned violent last year, leading to the destruction of city property and businesses downtown. It was one of many demonstrations across the country in the wake of the police killing of George Floyd.

State Rep. Allen Treadaway said the events of that day prompted him to propose the anti-riot bill.

“The legislation attempts to allow those who want to express their First Amendment rights, which I fully support,” he said. “But at the same time, when that breaks down and becomes very violent, we’ve got to have the tools to be able to address the problem.”

The International Center for Not-For-Profit Law reports, anti-riot or anti-protest bills are being debated among lawmakers in at least ten states this year.

Treadaway said the major components of his bill are meant to protect first responders and public safety, while penalizing those who participate in riots and assault police.

Democratic lawmakers like Rep. Merika Coleman oppose the bill. She said the language is vague and doesn’t protect peaceful protesters.

Celida Sota is an Afro-Latina community organizer. She’s led several demonstrations with groups like Alabama Rally Against Injustice and Birmingham’s chapter of Black Lives Matter. She, too, opposes the bill.

“It’s targeting black and brown folks in our communities and protesters, in particular, people who stand up for the rights of those whose voices have been suppressed and muted.”

Soto said the bill targets the wrong group of people. She said counter-protesters are the biggest threat.

“They always come and try to attack us with their words and they come many times armed. We’re not armed, we don’t have weapons, ” she said. “Sometimes we do fear riotous behavior but it’s not us.”

Soto is all too familiar with police activity during protests. She was arrested during a demonstration in Hoover last summer. She was charged with disorderly conduct and obstructing traffic.

The court case is still pending.

If Soto were to be arrested under Treadaway’s proposed anti-riot bill, she could face a misdemeanor charge and be detained for at least two days. If it was her second offense, she could be charged with a felony.

“If you know right off that there is a possibility by you going out on the streets that you could be detained for 48 hours just because or 24 hours, just because that might keep people from actually going out to raise their voices,” she said.

Rep. Treadaway’s anti-riot bill has the endorsement of the Alabama State Fraternal Order of Police and the Alabama Law Enforcement Agency.

Treadaway, a retired assistant police chief, has agreed to work with legislators on both sides of the aisle to make adjustments to the bill.

The legislation is expected to come back up for debate Thursday.