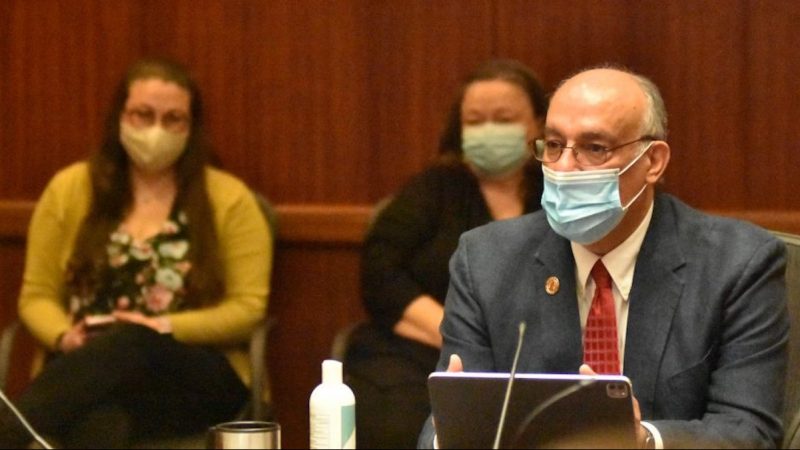 Tony Petelos, the only county manager Jefferson County has had, told county commissioners at their committee meeting today that he will soon retire.

“After 34 years of public service in many different jobs throughout the years and 10 years here at the county, I’m going to announce my retirement this year,” he said from his seat at the end of the board table. “I don’t have a date set, but I just want to give you a heads up that I do plan to retire this year. I’ve got a couple of projects I’m still working on and I want to get those done, but it’s been a pleasure and an honor to work with you.”

Petelos, 67, made the announcement with his wife, Teresa, and daughter, Stephanie, seated behind him.

“She’s been after me for years to retire, and I’ve been putting it off,” he said of his wife of 37 years. “She’s here to verify that I’m gonna go through it.”

While he is healthy now, the county managers recalled his bout with cancer seven years ago that was “touch and go” for a while. More recently, a three-week battle with COVID-19 reminded him that “life is short, and we need to enjoy it while we’re still healthy.”

Teresa, a former circuit court judge, said her husband’s long honey-do list starts with cleaning mildew from their outdoor furniture and sprucing up their place at the lake.

“Hopefully,” she said, “we’ll be able to spend a lot of time there during retirement.”

“We appreciate your service, and you’re not going unnoticed in the history of Jefferson County,” he said.

Joe Knight said stability is perhaps the county manager’s most valuable trait through a decade that has not been a “cakewalk.”

“You weren’t all over the place, and you are a guiding light to that stability that helped us all do what we had to do, and all your staff,” Knight said. “You never wavered. Even when you had your illness, you were still right there.”

Petelos said he loves his job, and the most favored part of his job is working as a team with commissioners, staffers in the county manager’s office and the county attorney. That teamwork was never more evident — or needed — than the past year of dealing with local impact from a worldwide crisis.

“Especially this year has been a very difficult year with the pandemic. Our employees came to work and continue to work. We continue to provide services,” he said. “We had to make major changes; we restructured the way that we do business so that we could provide the services. And thank God that we didn’t have to furlough or lay anyone off or, or do a reduction in force.”

Petelos was elected to the Alabama House of Representatives in 1986 and was twice re-elected, serving until 1997. In that year, he was appointed to Commissioner of the Alabama Department of Human Resources by Gov. Fob James and re-appointed to that position by Gov. Don Siegelman.

DHR was under a federal consent decree when he assumed leadership of the organization. Under his leadership, DHR developed a plan and ultimately was released from that consent decree. In 2004, Petelos was elected mayor of Hoover, and he was reelected in 2008 with no opposition.

He was appointed the first Jefferson County manager in October 2011.