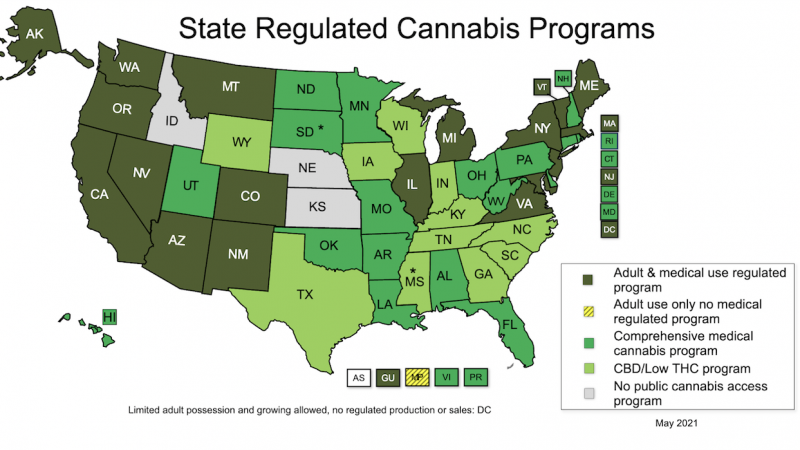 Last month, Gov. Kay Ivey signed Alabama’s first-ever medical marijuana law. The 100-page document can be a little daunting, so we read through it and pulled out the highlights.

1. What Will The Law Do, And How Do You Get Approved?

The law legalizes medical marijuana for adults and minors with certain conditions under a doctor’s recommendation. To get legally approved to use the drug, you have to visit a doctor who has a current license to practice medicine in Alabama and has passed an exam on medical marijuana. That doctor has to verify that you have a qualifying medical condition and determine that conventional medical treatment or therapy has failed to help your symptoms. The qualifying medical conditions include:

With a doctor’s recommendation and proof of an Alabama residency, you can pay to apply for a medical marijuana card. The fee won’t exceed $65. If you’re approved, the Alabama Medical Cannabis Commission will enter your information into the statewide cannabis patient registry system. That’s when you can start buying the prescriptive amount from a licensed dispensary.

But what about minors? Anyone under 19 years old has to go through the same process. They also need a designated caregiver who is authorized to buy and administer the drug. Both the caregiver and the minor have to be a resident of Alabama and be registered with the state cannabis commission.

It doesn’t legalize medical marijuana for everyone. Say, for example, you have symptoms like chronic back pain, endometriosis or an eating disorder. According to the law, those conditions aren’t covered — as of now.

Roughly 30 states like Oregon, California and Colorado have legalized medical marijuana, and it eventually led to legal recreational use in some of those places. But Alabama’s bill says that’s not going to happen. It emphasizes that “recreational use of marijuana remains a significant threat to public health and safety.” As a result, lawmakers instituted a pretty hefty punishment for violating the law.

You could face up to a Class B felony if you possess, distribute, manufacture or use medical marijuana without a license. That includes if you’re given the drug by a registered patient, caregiver or dispensary.

You could also face jail time if you possess more than 70 daily doses, even with a medical marijuana license.

3. What’s The Highest Dosage Available, And Can I Get It In A Gummy?

As of now, doctors can prescribe the drug for up to 12 months at a time. It will be up to the state cannabis commission to eventually decide how long a prescription can last before being renewed.

Medical marijuana is allowed in the forms of:

That means the drug cannot be smoked, vaped, covered in sugar, put into food or sold as a raw plant. The state cannabis commission will also establish “one universal flavor” for the jelly cubes and lozenges.

4. What Does This Mean For The Workplace?

Under the new law, employers have a lot of discretion and protection. They don’t have to allow or accommodate the use of medical marijuana. In fact, they can refuse to hire or let someone go even if that person uses the drug legally. Employers are also at liberty to create a drug-testing policy against medical marijuana or require employees to notify them if they start legally using the drug.

Finally, employers aren’t required to help pay for the drug through medical insurance plans or reimbursements, and they have the right to deny workers compensation for someone who fails a drug test or refuses to take one.

This leaves little legal defense for employees. For example, you can’t sue your employer if they don’t allow medical marijuana or if you lose your job, are disciplined or discharged because you use the drug legally. If you are fired for failing a drug test or refusing to take a drug test, you’ll legally be considered as having been “discharged” from the job because of misconduct. That means it could be more difficult for you to collect unemployment compensation and benefits, according to the Alabama Unemployment Compensation Handbook.

5. What’s The Timeline? How Soon Can I Buy Medical Marijuana?

That’s a tricky one. The timeline for when you can start buying the drug could be a year or more. First, the state has to start implementing the new law and setting up new bureaucracies.

Members of the Alabama Medical Cannabis Commission have to be appointed by July 1, 2021. A number of state officials, including the governor, state health officer and agriculture commissioner, get to name the 14 members of the board. Those commission members must be confirmed by the state senate in the next special or regular legislative session. Currently, that would be February 2022, though there’s political talk about a special session this summer or fall.

Next, the State Board of Medical Examiners will be required to adopt requirements by Dec. 1, 2021, that explain what boxes doctors must check off before issuing a recommendation. According to the law, this includes things like what should go in the patient’s medical record and any review of the patient’s controlled drug prescription history in the state’s database.

The state cannabis commission has until Sept. 1, 2022, to create a system that allows people to apply for licenses to produce, transport and sell the drug. The commission will also be tasked with establishing standards like how the drug should be packaged and labeled; chain of custody requirements; and how the drug can be advertised and marketed by dispensaries.

Before the drug is available for purchase, the Alabama Medical Cannabis Patient Registry System has to be created. That will electronically track physician certifications, patient names, daily dosage recommendations, and all medical marijuana purchases by a patient. Also, the commission will have to accept bids for the statewide seed-to-sale tracking system, which tracks all inventory and transactions across the state.

So, long story short: It could be September 2022 before eligible patients can start applying for a medical marijuana card.