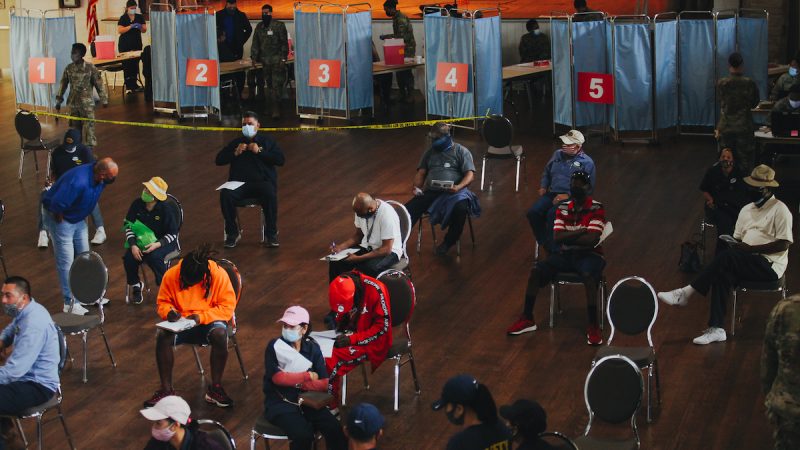 In a large auditorium in rural Plaquemines Parish, La., hundreds of commercial fishers and processing plant workers got their shot in the arm last week. The mass coronavirus vaccination event was a five-minute drive from the docks that house their fishing vessels – right where the Mississippi River meets the Gulf of Mexico.

National Guard troops administered doses to more than 300 people during the event held specifically for workers at Westbank Fishing and Daybrook Fisheries, a processing plant that turns fish into products like pet food.

“To be honest I didn’t feel nothing, no difference. I still feel the same,” said Angel Arroyo, a welder at Daybrook Fisheries. “I know I won’t infect anybody else or catch the virus.”

Arroyo said getting the vaccine was a relief. Throughout the pandemic, there have been more than a dozen cases among commercial fishers and plant workers from these companies. Daybrook officials said their workers likely got the virus via community transmission, though Westbank admits their fishers got sick on their vessels.

Arroyo never got COVID-19, but many of his colleagues did and some of the workers lost family members as well.

“I was freaked out because I didn’t know if I got it or my family got it. So I was afraid about it,” Arroyo said.

In Louisiana, there have been more than 1,000 coronavirus cases at food processing facilities, which have been the top source of infections across industries. Similarly, in Mississippi and Alabama, hundreds of cases were tied to poultry plants, where most workers are low-income and Black or Latino.

This vaccination event in Plaquemines Parish was organized after the Louisiana health department received a message from a concerned person who was worried essential workers in these industries would be left behind.

“We realize we have to meet people where they are,” said Dr. Shantel Hébert-Magee, a regional medical director for the greater New Orleans area with Louisiana’s health department.

Along the Gulf Coast, health officials in the region are starting to recognize the need for a targeted approach in getting the vaccines to workers in these types of high-risk industries. As the rollout expands, health officials and community groups are learning more about how to make sure the vaccine is not only available, but truly accessible. Here are some lessons so far:

When it comes to at-risk communities and essential workers, Theresa Sokol, acting state epidemiologist for Louisiana, has learned it’s important to consider all the ways coronavirus transmission can happen.

“Of our food processing outbreaks, probably almost 40 percent were related to some sort of meat, poultry, seafood processing,” Sokol said. “Oftentimes these workers are on production lines or work in close proximity to one another.”

Daybrook officials said they don’t have production lines at the plant. And they closed down the cafeteria, told workers to sanitize their spaces, socially distance, wear masks and take paid leave if they got sick.

Those prevention measures are very key, but Sokol said the virus can still spread off-shift, for example when workers are gathering during smoke breaks, carpooling to work or cohabitating in tight spaces.

“The guy who I was [carpooling] with, he got COVID and we didn’t know,” said Arroyo with Daybrook. “And I was riding with him everyday.”

Some workers from Westbank, for example, live together in trailers or in close quarters on boats. Communal living is common among migrants and agriculture workers who travel to Louisiana during harvesting seasons, because housing can be part of their contracts. More than 1,500 workers in the state’s seafood processing industry are on temporary work visas.

Sokol said these conditions greatly increase the risk for outbreaks, so it’s important to get the vaccines out early.

At the beginning of the vaccine rollout, most of Louisiana’s supply went to hospitals and pharmacies. But the department recognized those providers aren’t accessible to everyone. Health officials saw a need to pivot in order to reach more at-risk communities.

“This has been gradual,” said Hébert-Magee, with the Louisiana Department of Health. “Sometimes you think you have an equity lens, you decide to put vaccine in this facility, in the middle of this location that serves certain demographics, and then you have to figure out: Why aren’t the people who we thought would go to this facility not using it? And we dissect that.”

There are still challenges in meeting the needs of every community, but as supply has expanded, Hébert-Magee said the health department has been creating partnerships with community organizations.

Hébert-Magee said the idea of having specific mass vaccination events, like the one in Plaquemines Parish, can work in a lot of different places. But there’s no blanket approach for them, because “communities are not a monolith.”

“We have to look at those who might not be able to fit into an algorithmic approach. In order to meet them where they are, you need a type of boutique medicine,” she said.

As with so many aspects of public health, trust is key.

People who work in essential industries need their vaccination site to be convenient and appointment times have to align with their lifestyles. For the fishers, there are a lot of nuances to consider.

“When is their fishing season or their oyster season or when could you have the maximum impact? Is it better to go early in the morning?” Hébert-Magee said. “We realize that fishing season is going to start in April and many of them are going offshore for days or weeks. The priority is going to be to get that catch, not to come back to shore and get the vaccine.”

In Mississippi, the health department distributed most supply to large drive-thru sites in predominantly metropolitan areas at the start of the rollout.

“We’ve been highly successful at these … drive-thru models, but for many people that’s quite inconvenient,” state health officer Dr. Thomas Dobbs said during a press conference last week. “It’s during the working day, so that’s going to be an impediment. We also know that transportation can be a challenge … and some people just don’t want to drive that far.”

Dobbs said the state is working with industry partners to do worksite vaccination events soon.

4. Work With Community Leaders Who Understand The Need

In many areas across the region, community leaders are working with health officials to fill in the gaps in vaccine distribution.

Daniel Le works with a national organization for Vietnamese Americans called Boat People SOS. He focuses on populations in Mississippi and Alabama, where large groups of Vietnamese people moved to work within the fishing and retail industries.

Le said a lot of Vietnamese people over the age of 65 in the Biloxi area still haven’t been able to get a vaccine.

“It was not easy for someone who’s not fluent in English or technology savvy to get to the online portal,” Le said. “And initially supply was very limited. So once the forum was open, the vaccines were gone within 20 minutes. So we weren’t able to get a lot of people registered for vaccinations.”

Le had to work with these barriers. To distribute doses, he set up small pop-up events at local temples and churches. But those efforts were challenging with a small staff and limited budget.

So Le reached out to the Mississippi Department of Health.

Le is still working to build a relationship with the Alabama Department of Public Health and hopes to hold a drive there as well.