Working At Home With Kids: How The Pandemic Is Changing The Work-Life Balance 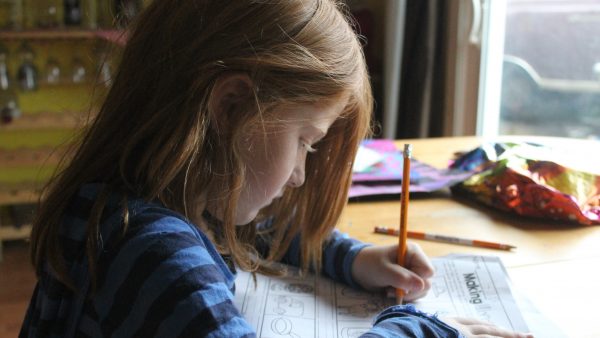 While the COVID-19 pandemic has forced people apart, it has also created a common ground for millions — by making many work from home.

For some workers who are also parents, functioning in the home office environment has brought a particular challenge into focus: managing the job and the kids at the same time.

To get some perspective on how big a deal this might be, consider this: two years ago, it was estimated that 3.6 percent of the American workforce was working at home — 5 million people, according to GlobalworkplaceAnalytics.com, drawing its conclusions from the American Community Survey of the U.S. Census Bureau.

Since the coronavirus pandemic prompted office closures and other social distancing measures, even more people have retreated to their home offices. How many?

“We estimate that 56% of the U.S. workforce holds a job that is compatible (at least partially) with remote work,” according to Global Workplace Analytics. “We know that currently, only 3.6% of the employee workforce works at home half-time or more. Gallup data from 2016 shows that 43% of the workforce works at home at least some of the time. Our prediction is that the longer people are required to work at home, the greater the adoption we will see when the dust settles.”

Real estate agent Jackelin Martinez knows what it’s like to balance working at home with being a mom. But she’s finding that the current pandemic-driven situation has been creating a lot of teachable moments — and not just for the kids.

“It has changed so much, because I can work from home,” Martinez said. “I can, but usually I would go to the office and work… Being home and having to make phone calls, having one kid — ‘Mommy, mommy, this’ and one kid, ‘ Mommy, mommy, that,’ — instead of me being able to do my calls, and I can get done in the office in an hour, it takes me way longer because I have to find the perfect timing to be able to contact these people without screaming kids in the background, yelling and playing. So it has affected me with being able to get things done.”

Martinez is having to adjust despite the fact that — unlike some — she was already working at home part of the time before the pandemic quarantines.

“I think that’s the only advantage that I have, with everything that’s going on, is being able to continue to work from home,” she said. “Fifty percent is work from home and the other 50 percent is having to go out and show houses — mostly open houses.” The pandemic has affected that work balance and her bottom line, she said.

Now, “We can only show houses, we can’t hold open houses anymore. And that’s really where I get a lot of my buyers, my clients,” she said. “It’s been tough.”

That means that she has a number of age-related mommy requests to deal with each day, she said. “A lot of cleaning up, too. So I haven’t 100 percent been capable of working from home because my husband; he actually owns a restaurant, so he’s not around to help around with watching them while I make my calls. So I haven’t really gotten much done.”

Martinez said she has had to develop a routine of sorts since this whole thing began.

“The first week or so, I was just kind of going with the flow. But now, this past week, I’ve kind of had to be really strict with my work schedule and with letting the kids know, and me — trying to find a time that I know that everyone’s taking a nap or a time that I know that they’re outside playing and kind of putting that into play with my schedule, and it’s been working,” she said. “Hopefully, it goes smooth for the rest of the week.”

Her school-age kids, who are enrolled in Shelby County Schools, have a schedule to keep, she said.

“That’s the only way I’ve been able to function working from home and having them home from school is we have a schedule. Like I said, the first two weeks it was going with the flow and whatever time I had, the time was made. But now that we’re looking at something that’s going to take longer, because it is, we’ve established a schedule in the house: what time we wake up. We eat breakfast at this time. At this time you have play time. At this time, Mommy’s going to sit down and work and you can go play outside. At this time you come in and you do your school work, because my kids are getting sent schoolwork from their teachers.”

She said that her in-laws live close by, making the grandparents a key part of keeping to the schedule. “I send the two little ones away when it’s time for the older ones to start doing school work. That way they’re not running around everywhere and distracting the older ones,” Martinez said.

“If it wasn’t for the schedule, we would probably be everywhere,” she said.

The school system emails the lessons to her kids, and finds other ways to keep in touch with them, she said. “The kids have Zoom time with their teachers, also, which is pretty good. It’s a great school system,” Martinez said.

But there are more changes to come, during the rapidly-approaching summer break. “We used to send the kids out to summer camp. And now that’s not an option, so they’re going to be home. I just hope I come out alive,” she said, with a laugh.

If she has advice for others, Martinez said, establishing and keeping a schedule would be the main thing.

“A schedule, and being strict with that schedule and following through because it’s so easy to be home and having to work from home and dazing off and sitting down on the couch and playing with the kids and getting distracted,” she said. “So it’s a lot of discipline, I guess, once you’re having to work from home and having to do school work with the kids from home. It’s definitely a lot of discipline and schedule.”