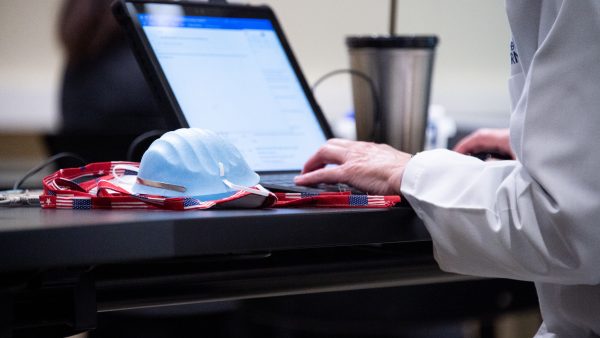 University of Alabama at Birmingham

Remdesivir, a drug developed through a federal grant to UAB, may be the first effective therapy for treating severely ill COVID-19 patients, early analysis of a large federally sponsored study found this week.

The drug reduced hospital stays by one-third and produced fewer adverse side effects, according to two UAB doctors who participated in the international trial.

Paul Goepfert, the UAB doctor who headed UAB’s participation in the placebo-controlled study, said the drug would become “standard of care” for coronavirus patients. An associate called the study “extraordinary.” And Dr. Anthony Fauci, director of the National Institute of Allergy and Infectious Diseases, under the National Institute of Health, said the findings are a “very important proof of concept.”

The remdesivir clinical trial was expected to produce results in mid-May, but an analysis of the first 400 participants produced the optimistic findings. The study has not been peer reviewed, so the results announced today are preliminary. And other, much smaller, trials of remdesivir have not shown such a positive effect.

“It’s an extraordinary study because of how quickly it came together,” infectious disease specialist Nathan Erdmann said at a UAB news conference Wednesday. The first UAB patients were enrolled in late March.

Erdmann said, “We now have a drug when compared against placebo has been demonstrated to have significant therapeutic benefits.” The doctor oversaw the study and enrolled 16 patients, some of whom came to UAB specifically to be in a clinical trial.

Goepfert, said, “This is the first step we’ve taken that targets the virus directly — and It worked. It’s 31% more effective over placebo — which doesn’t sound fantastic, but it will save lives and also give researchers direction on how to target this virus and come up with even better therapies.”

“It’s pretty incredible,” he said. “I’ve done a lot of trials for a long time and don’t think I’ve ever gotten a positive result so quickly. This will likely become standard of care. The challenge is for Gilead, which now owns the drug, to come up with enough doses for everybody who’s going to use this.”

Goepfert said the study results will change the way COVID-19 trials are done in the future: “We can no longer offer a placebo arm to a study; remdesivir will be the other arm.”

Not a Home Run Yet

Goepfert said the drug is “not a home run at this point,” but “at least we have something that can make a change in somebody’s life who has severe coronavirus infection.” The researcher said patients still in the hospital who had been given the placebo will now be given remdesivir.

Erdmann said he would not call remdesivir “a miracle drug in that people take it and are immediately better. There are many hurdles to come, but to have actual positive progress this quickly in the global outbreak is certainly encouraging.”

Goepfert said remdesivir already is available under the Food and Drug Administration’s compassionate-use protocol, but he expects its approval for wide-scale use will be fast-tracked. The New York Times said Wednesday that the FDA plans to announce remdesivir’s emergency use authorization very soon.

News outlets reported that Fauci expressed optimism that the drug could make a difference in speeding up the recovery of some patients infected with the virus. “The data shows that remdesivir has a clear-cut, significant, positive effect in diminishing the time to recovery,” the nation’s premiere infectious diseases scientist said.

Duration of hospital stay was reduced from an average of 15 days to 11 days in the trial population.

“Although 31 percent improvement doesn’t seem like a knockout 100 percent, it is a very important proof of concept because what it has proven is that a drug can block this virus,” Fauci said at the White House Wednesday.

The mortality data from the trial’s preliminary results showed remdesivir with fewer deaths than the placebo, but the figures have not yet reached statistical significance, according to Erdmann. He said “more robust” data is expected soon, as the results are analyzed further and the rest of the 1,063 patients move through the trial.

Goepfert said remdesivir was developed through federal funding of a major UAB drug-discovery grant and previously tried against Ebola. It had scant effectiveness in that human trial, but it was determined to be safe to use. Gilead Sciences of Santa Clara, California, was licensed to develop and produce the drug. The company said it has been preparing to produce remdesivir in large quantities as it anticipated it would work against COVID-19.

UAB infectious disease researcher Richard Whitley told BirminghamWatch recently that the medical center and its affiliate, Southern Research, are sifting through thousands of existing drugs in hopes of finding other agents active against the pandemic virus. The researchers are screening the compounds as part of an international effort led by California-based Scripps Research. Whitley is primary investigator on the grant through which remdesivir was discovered.