Shelby, Jones Side With Their Parties as Senate Acquits President Trump of Impeachment Charges 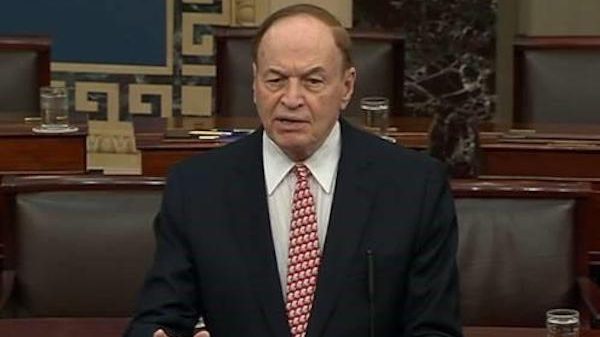 Both United States Senators from Alabama cast their votes along party lines as President Donald Trump was acquitted Wednesday of both articles of impeachment filed by the House of Representatives.

Sen. Richard Shelby voted with his fellow Republicans to acquit Trump, while Sen. Doug Jones went along with fellow Democrats and voted for conviction. The final total was 52-48 for acquittal on the abuse of power article and 53-47 on obstruction of Congress, far from the two-thirds majority required to remove Trump from office.

The only Senator to deviate from the rest of his party was Mitt Romney of Utah, a former Republican presidential nominee and frequent Trump critic, who went against his GOP colleagues on the obstruction charge.

Shelby, in a speech from the Senate floor shortly before the acquittal vote, asserted that the charges in the articles of impeachment were not crimes and therefore not impeachable offenses.

“Nowhere in the Constitution … or in the federal statute is abuse of power or obstruction of Congress listed as a crime. Nowhere. What constitutes an impeachable offense is not left to the discretion of the Congress. We cannot expand, I believe, on the scope of actions that could be deemed impeachable beyond that which the framers intended. What we really have here, I believe, is nothing more than the abuse of the power of impeachment itself by the Democratic House. Doesn’t our country deserve better? The president certainly deserves better. And today I’m proud to stand and repudiate those very weak impeachment efforts, and I will accordingly vote to acquit the president on both sides, both articles,” Shelby said.

Shelby also took issue with the accusation of abuse of power by the House impeachment managers.

“As the framers rejected in their wisdom maladministration, I believe that they, too, would reject the noncriminal abuse of power. Instead, the framers … provided for impeachment only in a limited, in a few limited cases —  treason, bribery and high crimes and misdemeanors. Only those offenses justify taking the dire move, dire step of removing a duly elected president from office and permanently taking his name off the ballot,” he said.

Jones stated his intentions earlier Wednesday, saying that he would vote for conviction on both articles.

Some pundits had thought Jones might switch sides and vote for acquittal, given his tough re-election campaign in a deeply conservative state. Jones, who was elected to the Senate with an upset victory over former Alabama Chief Justice Roy Moore in 2017, faces an election fight against a Republic nominee to be determined in the March primary. That race includes Jones’ predecessor, Jeff Sessions, who resigned from the seat to serve as attorney general in the Trump administration but left at Trump’s request in 2018.

Jones in his speech Wednesday morning said,  “After many sleepless nights, I have reluctantly concluded that the evidence is sufficient to convict the President for both abuse of power and obstruction of Congress,” according to the text of his remarks provided by his office.

“On the day I was sworn in as a United States Senator, I took an oath to protect and defend the Constitution. At the beginning of the impeachment trial, I took a second oath to do ‘impartial justice’ according to the same Constitution I swore to protect,” Jones said.

“These solemn oaths have been my guides during what has been a difficult time for our country, for my state, and for me personally. I did not run for Senate hoping to participate in the impeachment trial of a duly-elected President, but I cannot and will not shrink from my duty to defend the Constitution and to do impartial justice.”

Jones cited Trump’s refusal to cooperate with the House of Representatives investigation and his efforts to block witnesses from the trial as evidence that he violated the impeachment article that accuses Trump of obstruction.

Jones deviated somewhat from the text of his remarks provided by his staff. He invoked the name of former President and Sen. John F. Kennedy, who wrote the book “Profiles in Courage.” Jones said he sits at Kennedy’s former desk in the Senate chamber.

“It is simply a matter of life and law. It is not a courageous act,” Jones said of his decision to vote for conviction.

“The country deserves better, and we must find a way to move beyond these partisan divides,” Jones added.

Read the text of Jones’ remarks.

In a statement after Jones’ speech, Session was quick to criticize Jones’ action. “In voting to remove our duly elected President, Doug Jones personifies the left’s irrational enmity against President Trump … . Doug Jones is a foot soldier for Chuck Schumer and the radical left, and he has made it clear that he is in the U.S. Senate to represent Washington Democrats, not the people of Alabama,” Sessions said in a statement issued by his campaign.

“The Democrats’ partisan impeachment charade has been a national tragedy,” Sessions said in the statement.

“As I have stated from the beginning on multiple national and local news programs, it was clear that the evidence put forward by Speaker Pelosi and Representative Schiff was nowhere close to justifying an impeachment, much less the removal, of the President.”