Jones Sides With Senate Democrats, Will Vote to Convict Trump in Impeachment Trial 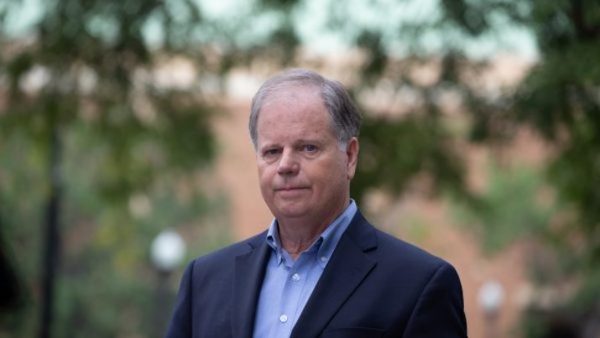 Sen. Doug Jones joined his Democratic colleagues Wednesday morning and said he will vote to convict President Donald Trump of two charges in his impeachment trial.

“After many sleepless nights, I have reluctantly concluded that the evidence is sufficient to convict the President for both abuse of power and obstruction of Congress,” Jones said in a copy of remarks provided by his office shortly before he made his speech on the Senate floor.

“On the day I was sworn in as a United States Senator, I took an oath to protect and defend the Constitution. At the beginning of the impeachment trial, I took a second oath to do ‘impartial justice’ according to the same Constitution I swore to protect,” Jones said.

“These solemn oaths have been my guides during what has been a difficult time for our country, for my state, and for me personally. I did not run for Senate hoping to participate in the impeachment trial of a duly-elected President, but I cannot and will not shrink from my duty to defend the Constitution and to do impartial justice.”

Jones’ decision will have no effect on the outcome of the trial; with two-thirds of the Senate required to vote for conviction, Trump’s acquittal is all but certain in a chamber where Republicans hold a 51-47 majority. But Jones’ vote will have a direct impact on his campaign for re-election, in which he is trying to retain the seat that he won in a special election upset over former Alabama Chief Justice Roy Moore in 2017.

Today, I have the solemn responsibility to uphold my oath of #ImpartialJustice

Growing up in Alabama I learned right from wrong.

What the President did was more than wrong. Someone has to stand up & say so. I will fulfill my oath & vote in favor of both articles of impeachment. https://t.co/X5botsMujs

Jones was one of a handful of Democrats whose vote was in some doubt, since it will not affect the anticipated overall outcome. A vote to acquit could have been useful in attracting voters in the heavily conservative state, while a vote to convict could aid his ability to raise campaign funds from supporters outside Alabama.

Sen. Richard Shelby will speak on the Senate floor this afternoon, not long before the scheduled vote on the two articles of impeachment at 3 p.m. Central Time, according to his staff. Shelby is expected to join the overwhelming majority of his Republican Senate colleagues in voting to acquit Trump.

Here is the full transcript of Jones’ planned remarks, provided by his office. He deviated somewhat from the remarks as he made his speech this morning, but he made no substantive changes:

“On the day I was sworn in as a United States Senator, I took an oath to protect and defend the Constitution. At the beginning of the impeachment trial, I took a second oath to do ‘impartial justice’ according to the same Constitution I swore to protect.

“These solemn oaths have been my guides during what has been a difficult time for our country, for my state, and for me personally. I did not run for Senate hoping to participate in the impeachment trial of a duly-elected President, but I cannot and will not shrink from my duty to defend the Constitution and to do impartial justice.

“In keeping with my oaths, I resolved that throughout this process I would keep an open mind and hear all of the evidence before making a final decision on the charges against the President. For months, I have been studying the facts of this case exhaustively. I have read thousands of pages of transcripts, watched videos of testimony, taken copious notes, reviewed history and precedents and discussed this case with colleagues, staff, and constituents, in addition to having participated in the Senate trial over the past two weeks. After many sleepless nights, I have reluctantly concluded that the evidence is sufficient to convict the President for both abuse of power and obstruction of Congress.

“With the eyes of history upon us, I am acutely aware of the precedents this impeachment trial will set for future presidencies and Congresses. Unfortunately, I do not believe those precedents are good ones. I am particularly concerned that we have now set a precedent that a fair trial in the Senate does not include witnesses and documentary evidence, even when those witnesses have first-hand information and the evidence would provide the Senate and the American people with a more complete picture of the truth.

“I am also deeply troubled by the partisan nature of these proceedings from start to finish. Very early on I implored my colleagues in both houses of Congress to stay out of their partisan corners. Many did, but so many did not. The country deserves better. We must find a way to rise above the things that divide us and find the common good.

“Having done my best to see through the fog of partisanship, I am deeply troubled by the arguments put forth by the President’s lawyers in favor of virtually unchecked presidential power. In this case, the evidence clearly proves the President used the weight of his office and that of the United States government to seek to coerce a foreign government to interfere in our election for his personal political benefit. The President’s actions placed his personal interests well above the national interests and threatened the security of the United States, our allies in Europe, and our ally Ukraine. His actions were more than simply inappropriate. They were an abuse of power. With impeachment as the only check on such presidential wrongdoing, I felt I must vote to convict on the first charge of abuse of power.

“The second article of impeachment, obstruction of Congress, gave me even more pause. I have struggled to understand the House’s strategy in their pursuit of documents and witnesses and wished they had done more. However, after careful consideration of the evidence developed in the hearings, the public disclosures, the legal precedents, and the trial, I believe the President deliberately and unconstitutionally obstructed Congress by refusing to cooperate with the investigation in any way. While I am sensitive to protecting the privileges and immunities afforded to the President and his advisors, I believe it is critical to our constitutional structure that we protect Congress’ authorities also. In this matter it was clear from the outset that the President had no intention whatsoever of any accommodation with Congress when he blocked both witnesses and documents from being produced. In addition, he engaged in a course of conduct to threaten potential witnesses and smear the reputations of the civil servants who did come forward and provide testimony. The President’s actions demonstrate a belief that he is above the law, that Congress has no power whatsoever in questioning or examining his actions, and that all who do so, do so at their peril. That belief, unprecedented in the history of this country, simply must not be permitted to stand. To do otherwise risks guaranteeing that no future whistleblower or witness will ever come forward and no future President — Democrat or Republican — will be subject to Congressional oversight as mandated by the Constitution.

“Senators are elected to make tough choices. We are required to study the facts of each issue before us and exercise our independent judgment in keeping with the oaths we take. The gravity of this moment, the seriousness of the charges, and the implications for future presidencies and Congresses all contributed to the difficulty with which I have arrived at my decision.

“This has been a divisive time for our country, but I think it has nonetheless been an important constitutional process for us to follow. As this chapter of history draws to a close, one thing is clear: our country deserves better than this. We must find a way to come together, to set aside partisan differences, and to focus on what we have in common as Americans. We are facing great challenges both domestically and internationally, but it remains my firm belief that united, we can conquer them and remain the greatest hope for people around the world.”