Removed Birmingham Confederate Monument ‘A Weight Lifted Off Of This City’ 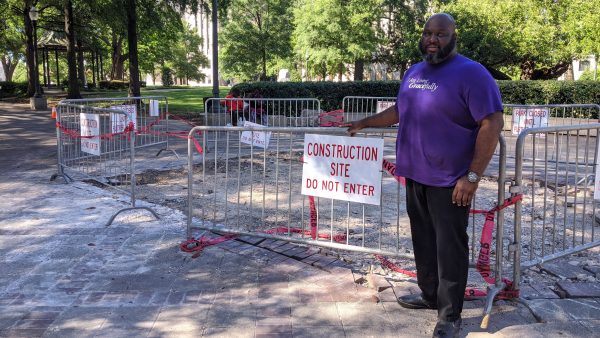 Markiese Jones stands in front of the gravel pit where a Confederate monument once stood at Linn Park.

Some images below contain graphic language.

A little over two weeks ago, a group of protesters gathered at Linn Park in downtown Birmingham. Markiese Jones went to check it out and started filming. He watched as the crowd spray-painted monuments and chipped away at a 52-foot-tall Confederate statue at the park’s entrance. Narrating a Facebook Live video, Jones said the group was mostly young and diverse.

“They are absolutely passionate about what they’re doing, and I’m in awe,” Jones said.

That night, the group of protesters tried and failed to pull down the 115-year-old Soldiers and Sailors Monument, but they got the attention of Birmingham Mayor Randall Woodfin. Less than two days later, the structure was gone.

“In order to prevent more civil unrest in our city,” Woodfin said at a press conference, “I think it is very imperative that we remove this statue.”

It was a quick departure for a monument that Birmingham has tried to take down for years.

‘The Cultural Redemption Of Jim Crow’

When Birmingham disassembled the statue and dug up its cornerstone at Linn Park, it violated a 2017 state law that protects historic monuments. The city now faces a lawsuit over the issue and could be forced to pay a $25,000 fine. Despite that, other cities have followed suit. In recent weeks, Mobile removed a 120-year-old Confederate statue and in Tuscaloosa, the University of Alabama (UA) removed three plaques and a large boulder that commemorated the Confederacy.

Hilary Green, associate professor of history at UA, said the removal of these structures in Alabama, and across the nation, is significant.

“I feel like I’m a witness to history that I read about, I write about and talk about,” Green said. “Now I’m like, ‘This is going to be a moment that I’m going to be teaching, writing about for the rest of my life, and I’m here and I’m seeing it.’” 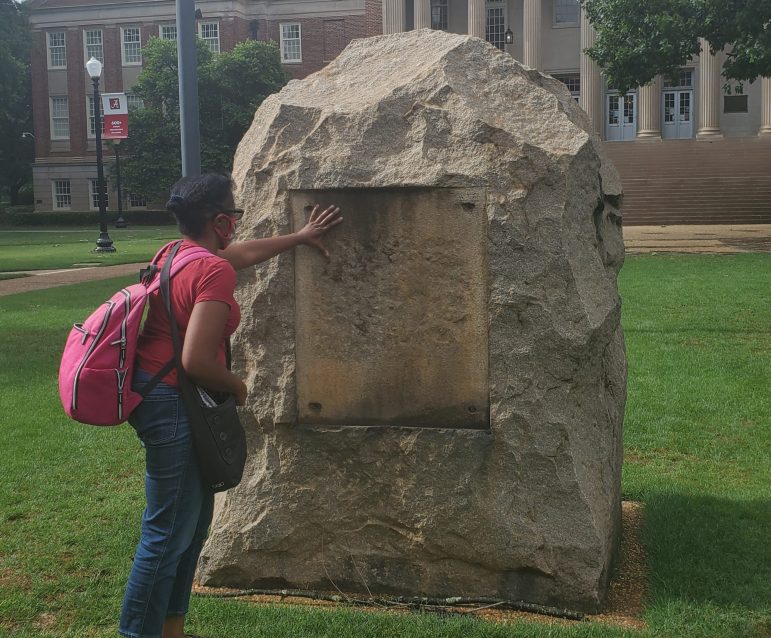 Hilary Green
Historian Hilary Green touches the spot where a plaque once commemorated the UDC Boulder on the UA campus. The boulder has also now been removed.

Green said Confederate symbols that sit in front of government buildings or rise above public parks have always been a source of pain for African Americans. She said most of the statues were erected between 1890 and 1915, when lynchings were common and segregation divided the country.

“The cultural redemption and cultural enforcement of Jim Crow is what those monuments represent,” Green said.

Lecia Brooks has studied the nation’s Confederate symbols for years. She co-authored a report by the Southern Poverty Law Center that tracks them and campaigns for their removal.

In recent weeks, Brooks said the death of George Floyd has inspired a new wave of activism and people want change.

“The country is focused on better understanding how systemic racism and anti-black racism is made manifest,” she said. “How is it systemic? What are some of the structures that uphold the system?”

Brooks said monuments to the Confederacy are part of that structure. Removing them from public space, she said, gives people an opportunity to heal and move forward. 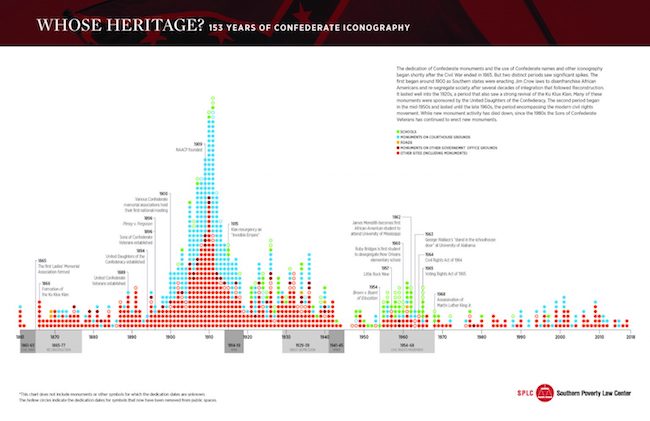 Once a community decides to take down a monument, which can be large and heavy, it can be difficult to find it a new home. In some states, statues have ended up in storage, or even sold at auction.

Birmingham officials will not reveal the current location of the statue they removed from Linn Park, citing security concerns, but they said they are still figuring out what to do with it. Groups like the Sons of Confederate Veterans, who opposed removing the monument in the first place, want it restored and preserved on private property. In Mobile, officials recently announced they moved their Confederate statue to the History Museum of Mobile.

Green said if the community agrees, it is OK to put a Confederate symbol in a museum or archive.

“But let’s put it somewhere where it can be contextualized,” she said, “and you can go and study it where it is, as an artifact of the past.”

Green said that means any damage or markings like graffiti should stay, because that documents the history of the monument’s removal. 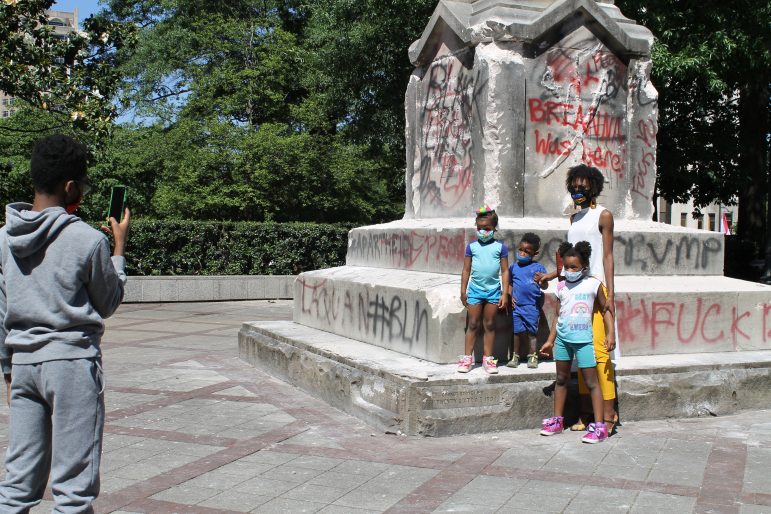 Miranda Fulmore,WBHM
A family poses for a photo in front of the Soldiers and Sailors Monument at Linn Park the day after protesters spray-painted it and called for its removal.

At Linn Park today, a construction fence surrounds the patch of gravel where the Confederate statue once stood. Markiese Jones said he cannot believe it is gone. He said he does not support vandalism but the monument needed to come down.

“With this being gone, in a pretty much all black city,” Jones said, “it was a weight lifted off of this city,”

He is not too concerned about what happens to the statue, but he is excited to see what might take its place. He said the city could build a monument of one of Birmingham’s countless black leaders, or a memorial to the community coming together today and asking for a better future.