Pepper Place Farmers Market Becomes A Drive-thru For The Pandemic 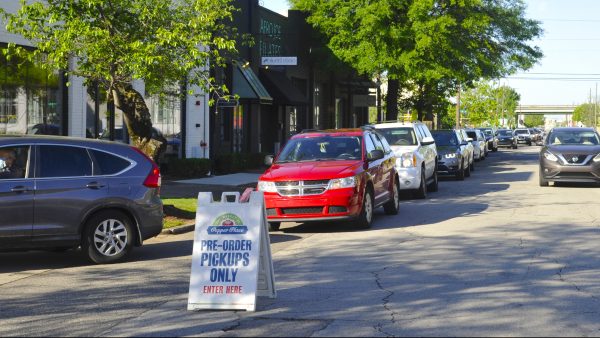 On a normal Saturday morning, the streets around the Market at Pepper Place in Birmingham would be full of people searching for farm fresh produce.  But that open-air market is not possible right now because of the coronavirus pandemic, so organizers had to come up with a different model that would help farmers, who had planted crops and have lost orders from restaurants and other customers.

“Our team started talking about what were our options,” said Cathy Sloss Jones, founder of the Pepper Place market. “So we thought we could try this idea of a drive-thru market.”

These days, customers place their orders ahead of time online, pre-pay and then on Saturday mornings they line up to get their items.

“It really works almost like a grocery store aisle,” Jones said. “You just go straight down the street and stop and pick up at each individual farmer’s stand.”

Farmers were not sure what to think when told of the plan. Margaret Ann Snow, co-owner of Snow’s Bend Farm in Tuscaloosa County, said they “were a little nervous” about the new system, but sales have doubled with the drive-thru. It is a big deal because farmers markets account for a third of their revenue. Losing the market would have meant not only a financial loss, but an emotional hit.

“You’ve made something very perishable. If no one’s there to buy it that week, all of that labor, all of that work, all of that effort is gone,” Snow said. “No one gets to eat it.”

Pepper Place regulars Amy Fineburg and her husband Lee Meadows said some things have not changed with the new model. For instance, they advise ordering early because items do sell out.

“We found that out the first two weeks with strawberries. Missed ‘em,” Meadows said. “I was so mad.”

But, Fineburg and Meadows said, there is plenty that is not the same. They miss the spontaneity of just showing up and discovering what the farmers have. For Snow, the new system means she has to plan ahead. She can not just walk into the field on a Thursday or Friday to decide what to take.

The market is also smaller. Pepper Place would normally hold about 100 tents. The drive-thru can only handle about 30, although organizers say they are looking at adding a second day.

A drive-thru is efficient, but it lacks spiring according to Jones.

“That’s why if you ask any of our farmers, they will say they would never give up the regular market to do this,” Jones said.

Snow said farming is naturally a social distant activity and those Saturday mornings are a chance to connect with shoppers and other growers.

Jones does not have a timeline for getting back to the regular market. She said safety is the priority. They have looked at models from around the world for injecting some of the walkability back into the market. In the meantime, they are taking it week by week.

As much as they miss the regular Market at Pepper Place, Meadows and Fineburg, do not plan to rush back as soon as it returns. They said they take social distancing very seriously, so when that time comes they will probably wear face masks or go at off peak times. Fineburg said she won’t feel comfortable until there’s widespread testing and contact tracing or a vaccine.