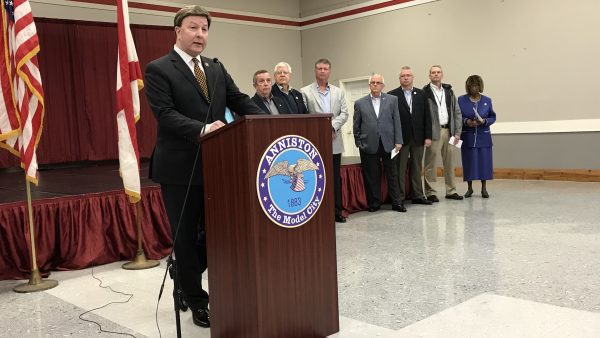 Congressman Mike Rogers speaks at a press conference Monday in Anniston about cancelled plans to bring Americans infected with the new coronavirus to the city.

Leaders in Anniston Monday defended their objections to earlier plans by federal officials to move Americans infected with COVID-19 to a facility in the city.

The U.S. Department of Health and Human Services announced this weekend it would house Americans with coronavirus disease at the Center for Domestic Preparedness, or CDP, in Anniston. That plan later was cancelled. State and local officials say they’re compassionate, but the plan lacked details.

At a city council meeting Monday morning, Anniston Mayor Jack Draper repeatedly said he had concern for those who contracted the new coronavirus — in this case Americans who had been quarantined on a cruise ship in Japan and tested positive for the disease.

But Draper said the CDP is a training facility for the Federal Emergency Management Agency, not a quarantine. It was created in response to the 9/11 attacks to help emergency responders prepare for mass casualty situations. He says it’s not set up to contain infectious diseases. Federal authorities, Draper said, had no procedures around transporting patients to local hospitals, should the need arise.

“At the end of the day, I think wisdom prevailed,” Draper said. “I think it was ultimately determined that this is probably not the best location for those evacuees to be transported.”

The Americans evacuated from the Diamond Princess cruise ship are at Air Force bases in Texas and California.

At a press conference later Monday, Congressman Mike Rogers pointed out the center hosts people from all around the country for training.

“It was not only that we were ill-prepared, it was a boneheaded decision to bring them to a facility that’s going to have individuals going back throughout our nation who could be contaminated,” Rogers said.

Some members of the public at the press conference sympathized with officials, saying it was clear they were caught off guard. Rogers said the Alabama governor’s office was only informed of the decision Friday evening. Draper said the city received an email Saturday at noon. Other members of the public expressed skepticism.

Officials tried to quell fear and rumors that circulated in response to the announcement. Rogers said no one infected with the disease has been brought to Anniston, despite rumors patients had already arrived. He says there is ongoing activity around the center, which is on the former Ft. McClellan site, so resident should not read into any specific happenings there.

Anniston resident Glen Ray said the weekend’s events feed into longstanding mistrust in the community. He mentioned that for years, industry secretly dumped toxic chemicals in Anniston. The city settled with two companies, Solutia Inc. and the Monsanto Company for $700 million in 2003. Ray said the city is still trying to rebound from the suspicions that created.

“For something like this to just drop … it make[s] it seem like no one cares about this city, and we have good people here,” Ray says.