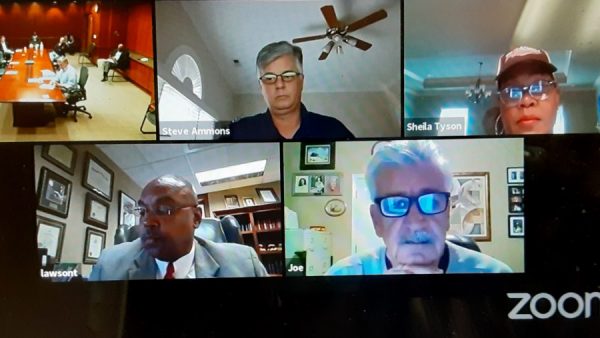 Jefferson County Commission President Jimmie Stephens and county manager Tony Petelos were among those who took in today’s emergency meeting in the commission board room. Conferencing in via Zoom were, clockwise from top center, Commissioner Steve Ammons, Commissioner Sheila Tyson, county attorney Theo Lawson and Commissioner Joe Knight. Commissioner Lashunda Scales was on the video conference via phone.

The Jefferson County Commission used its second emergency meeting of the COVID-19 pandemic to extend the closure of county facilities until April 30 and set up a $1 million COVID-19 fund to handle needs as they arise.

The panel, which conducted a virtual meeting via the Zoom app, transferred $1 million from the county’s Catastrophic Event Fund to handle virus-related costs.

Commissioner Lashunda Scales questioned how the $1 million figure was derived. Commission President Jimmie Stephens said that amount is a “place holder” so that money can be in place as the need arises. He cited a similar action the commission took following the rash of tornadoes on April 27, 2011, that struck Jefferson County.

“There was a need for chainsaws, so the county went out and purchased chainsaws and came back and presented those invoices,” Stephens recalled. “As long as those invoices were reasonable, they were reimbursed at that time.

“That process will be followed here also,” he said.

Commissioner Joe Knight, chair of the commission’s finance committee, said the COVID-19 Fund has been established in the general fund.

“We’re won’t have to go to all these different areas at the end to see where we spent money and how,” he said. “It’s going to be all categorized under one heading of the COVID-19 Fund. We just capitalized that fund by moving money out of the emergency fund into that fund (for) whatever emergency may arise or whatever we might need it for. Hopefully we won’t. It’s just an accounting thing.”

The first $80,750 of that $1 million was used to purchase 55 hospital beds from Jett Medical Company in the event a “surge hospital” must be established. Such a facility will be set up if local hospitals become overcrowded.

Knight cited what’s being done in New York with the mercy ship and at the Javits Center.

“They’re setting up all those cots in the event they need them,” he said. “That’s your surge facility, in case all our hospitals get overloaded and you need to put maybe patients that aren’t COVID patients, move them over there.”

Knight said the Sheraton Birmingham hotel is being considered for that use, adding that the Army Corps of Engineers is expected to make a report soon. He added that facilities will be needed to house doctors, nurses and the like who are on the frontline of treating patients.

“There’s no manuscript, there’s no playbook here,” Knight said. “But we watch the other cities, what they’re doing, in New York especially, how (New York Governor Andrew) Cuomo’s doing it. That’s why you set up these unified command centers and incident management teams so that you try to speak countywide with one voice.”