Frustration And Anxiety While Waiting for Unemployment Benefits To Arrive 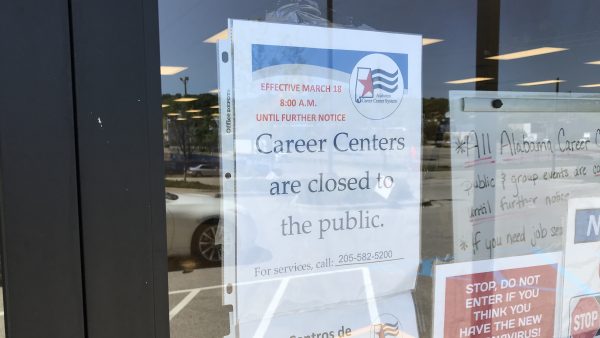 A sign on an Alabama Department of Labor Career Center in Birmingham directs people to a phone number for service. Many people who have applied for unemployment benefits say they've spent hours on the phone without ever talking to a person.

New numbers released Thursday show about 77,000 Alabamians filed initial unemployment claims last week. That’s down from the week before, but that brings total claims to more than 285,000 since the coronavirus pandemic forced widespread layoffs and furloughs.

The Alabama Department of Labor is urging patience as they work through the backlog. But for those counting on that money to stay afloat, patience is in short supply.

Aaron Torofer is in that boat. He’s a student at Jefferson State Community College, but his job serving food at Samford University’s cafeteria might give him a leg up in this world of COVID-19.

“It’s the allergy line that kind of avoids the nuts and the gluten and things like that,” Torofer says. “So I clean, wash my hands all the time.”

Samford, like many universities closed its campus in March. Torofer was furloughed and filed an unemployment claim since he wasn’t sure when he’d have a job again.

A letter came a few days later saying he had been approved. But in order to keep those benefits, Torofer has to recertify every week. Torofer couldn’t remember his pin number to recertify online and was locked out. He’s spent hours on the phone since.

When he calls, he hears a recording saying there’s a high call volume. He’s then disconnected. He has yet to receive any money.

Multi-hour wait times on the phone without talking to a human being is the most common thread among those who are applying or trying to follow up on unemployment claims. The labor department says they’re in the process of setting up another call center.

Hannelore Melville applied and received a denial letter a few days later. But Melville is self-employed as a personal chef in Birmingham. The state has since issued more guidance for those in her situation. Melville reapplied, but says there’s not a lot of information.

“It’s not the individual humans I’m faulting as much as the system per se,” Melville says. “It’s just all very, very confusing.”

She’s crossing her fingers money will come. Melville says she could get by for about two months thanks to the federal stimulus, but restarting the business is a source of worry. Because so many of her supplies are perishable, it’s like starting from scratch.

Nathan Kifer says he tries to check his bank account just once a day to keep his sanity while he waits for benefits. He was furloughed in March from an auction company in Leeds. He didn’t have a problem applying online, but it’s now past the 21 days the state says it can take to pay out claims.

“When I’ve checked online, it says not paid,” Kifer says. “I have no idea if that means that mine was rejected. They haven’t gotten around to processing my paperwork yet. I have no idea.”

Kifer is a single dad to a son with special needs. He says there’s not much left to cut.

“If I don’t get some sort of income by about Monday of next week, we’re going to be starting to run out of food,” Kifer says.

Some payments are being issued. Last week, the Alabama Department of Labor said almost 61,000 claims have been paid. One of them is Drew Duncan’s. He works at the Mercedes plant in Vance, which is shut down until April 20th. He counts himself lucky and surprised given all the horror stories. He received a payment within two weeks.

“I’m just hoping that much more needy folks in this state, [people in] worse situations than myself will be able to get it this quickly,” Duncan says.

Aaron Torofer, the community college student, is getting by with help from friends and family, but it strains those relationships. He’s had help from the state finding work before.

“I got my Samford dining job off of the unemployment website,” Torofer says.