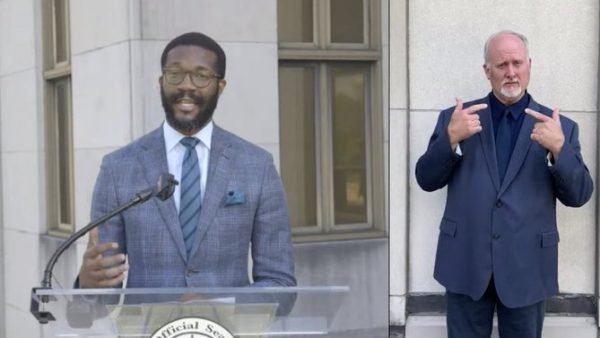 Mayor Randall Woodfin at a virtual press conference on May 12, 2020.

Birmingham’s public safety curfew is no longer in effect, but the ordinance requiring masks or face coverings to be worn in public has been extended for another week.

The Birmingham City Council made those changes in response to Gov. Kay Ivey’s amended “safer-at-home” order, which went into effect Monday. The new order significantly loosened restrictions on public gatherings and allowing non-essential businesses, such as bars, restaurants and salons, to reopen “subject to social-distancing and sanitation rules.”

Birmingham previously had reduced its 24-hour public safety curfew to an overnight ordinance, reflecting Ivey’s reopening of retail businesses late last month. Now, even the overnight curfew has been lifted.

But the city’s face covering ordinance, which previously had been slated to expire Friday, will continue through May 22, with one notable exception for public bars, restaurants, “or other food or beverage establishment(s).”

“From a public health perspective, I disagree with any loosening of the restrictions,” he said. “I would also urge the public to be extremely cautious as things reopen. I support our small business owners … but I for sure am not going to a bar or any establishment where the staff and customers aren’t taking precautions … This virus is still just as much in our community as it ever has been.”

District 2 Councilor Hunter Williams, meanwhile, argued that the face covering ordinance could be even looser.

“I think there is a legitimate cause of wanting people to wear masks … (but) I think that business owners can mandate rules, whether it be a big-box store like Publix or a small mom-and-pop boutique, that you have to wear a face mask.” The city, Williams argued, “should be leaning toward a (public) education approach rather than an ordinance or law enforcement approach … I think we should let our ordinance expire.”

Many councilors disagreed with Williams; District 9 Councilor John Hilliard, for instance, suggested increasing penalties on those who violate the face mask ordinance, placing a contemporary spin on a famous Malcolm X quote.

“I think all means necessary are important to save lives,” he said. “We’re going to be looking at more lives being lost than possibly the first time around … Who wants to be responsible for numbers going up? If a face mask will help at any point, we should continue to push that by law and by any fines necessary.”

The wording of the ordinance allows the council to impose a new curfew “if conditions worsen and require stronger measures to further reduce the spread of COVID-19.” The council also has the option to extend the face mask ordinance deadline.

In a Tuesday afternoon press conference, Mayor Randall Woodfin said he was unconcerned by an April 30 letter Alabama Attorney General Steve Marshall sent asking him to “reconsider your intention to enforce the (face covering) ordinance with fines or jail time.” Earlier, Marshall had warned cities and counties to be careful not to violate the constitution when issuing local COVID-19 restrictions that were more strict than state regulations.

“As plainly as I can put it, the city of Birmingham is very busy fighting the coronavirus,” Woodfin said. “We don’t have time to fight any other elected officials. We’re doing everything we can that’s necessary to protect the residents of this city and I’m happy to say that most of the residents in this city are complying with the efforts we put in place from a public health standpoint.”

COVID-19 cases have steadily increased in Alabama since late March. the state surpassed 10,000 confirmed cases on Monday, with a death count of 403 people. Jefferson County had 1,153 cases and 62 deaths late Tuesday afternoon.

Ivey in March closed nonessential businesses in an effort to reduce the spread of the novel coronavirus, which has sickened more than 10,000 Alabamians. Now the state is being reopened in phases. Ivey announced Friday that restaurant dining rooms, salons and barber shops, and athletic facilities could join the list of businesses that may reopen as of Monday. She also removed restrictions to allow groups of more than 10 people to gather.

But the order also places restrictions on those businesses and gatherings. Her order still requires people to maintain social distances of six feet or more between themselves and others and it requires thorough hygiene measures be taken.

Even as businesses opened, health and government officials urged anyone who could stay home to do so and reiterated the importance of social distancing and thorough hygiene.

Extension of Birmingham Mas… by Miranda Fulmore on Scribd