Comedians Get Extra Creative During The COVID-19 Pandemic 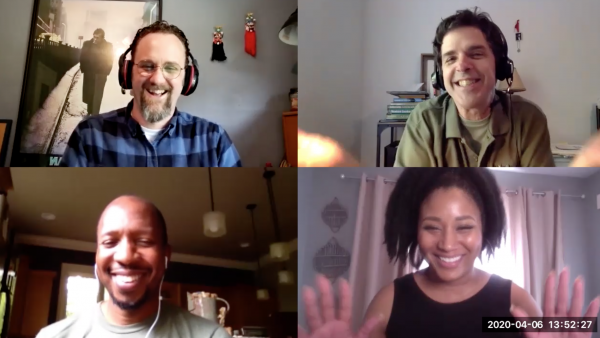 If a joke falls in the forest, does anybody hear? Does anyone laugh? With shelter in place orders still in effect in Alabama, comedy clubs are that lifeless forest. But local standup comedians and improv performers are finding workarounds to practice their craft and connect with audiences.

“Comedy, standup comedy, in particular, is really hard to exist in a vacuum,” said standup comedian Eunice Elliot, who recently left her job as a morning anchor at WVTM, the Birmingham-area NBC TV affiliate. “So much of standup comedy relies on the audience and the energy of the audience and the laughter. And so, a lot of comedians are starting to have to get really creative in figuring out how can we have these funny moments without the crickets.”

Elliot is hosting bi-weekly shows on Facebook and YouTube Live, featuring other performers including many with Birmingham ties, such as Daily Show correspondent Roy Wood Jr. and U.S. Army veteran Noah Galloway. In addition to raising the roof with laughs, the shows, called “Comedy Quarantined,” also raise money to help support the staff at Hoover’s Stardome Comedy Club, which has been closed since mid-March.

“We’re kind of an audience for each other in this comedy quarantine,” said Elliot, who likens the set-up to a Zoom meeting. “We’ll always have more than one comic at a time, so that way it’s less of a conversation and we’ll have a round table.”

While it’s not exactly audible laughter, the audiences are at least able to provide feedback through comments on Facebook.

“I told a story about getting cursed out about Doritos,” Elliot said of a hilariously awkward experience with an ex-boyfriend.  “The other guys on the panel wanted to know the [boyfriend’s] name. I said I wouldn’t say his name, and probably the next 50 comments were name guesses. So, the audience felt good and being able to participate in it was also a confirmation that they were really there.”

But performing in the age of a pandemic presents unique challenges for improv artists. Kris Genschmer is the artistic director at Positively Funny Improv and Birmingham Improv Theatre.

He and his crew of five or six co-conspirators perform multiple times each week using Twitch, a live streaming platform that, until recently, has largely been the domain of online gamers. The shows, called “Twitching for Laughs,” are also streamed on Facebook and YouTube Live.

Watch BiT Presents: Positively Funny Improv Live! 4-23-2020 from bhamimprov on www.twitch.tv
Among the obstacles Genschmer and his team have to overcome is the lack of physical interaction inherent in an online performance.

“I’m a very physical improvisational actor,” he said. “I mean, I still enjoy it. It’s still fun, but it’s quite difficult. It’s a good exercise and really focuses us on what we have to say as opposed to what we look like, what we’re doing, while saying it.”

The BIT, as the theatre is called, uses Zoom to actually record the performances; much like your typical office meeting, only nobody makes any pretense of behaving. The Zoom sessions are then streamed through Twitch, which, like Facebook, allows the audience to comment in real-time. Being an improv show, viewers are asked to provide ideas for sketches and games in which the improvisers act out various scenarios.

“I’ll ask the audience for a list of suggestions,” explained Genschmer, “whether they’re relationships with people, locations, things you might find in an attic, arguments that people might have, or whatever. We’ll have hundreds of suggestions. I mean some people type 70 of them in a row.”

Genschmer and crew have been pleasantly surprised at viewership.

“We were shocked when we started up,” he said. Just so many people decided they wanted to come and watch. I know some people that they’ll sit around and their entire families will be on their phones or the laptops … watching.”

Walk’n Around With Chris Davis

Many Birmingham-area residents know Chris Davis from his standup and improv performances. He’s calling on both of those comic talents — and then some — to do a show he live streams daily at noon on Facebook called “Walk’n Around With Chris.”

During the show, he walks around outside and, basically, describes what he sees.

“It’s a kind of a stream of consciousness,” said Davis, noting that he incorporates what viewers post as comments during the show.

“The interaction part is a lot of fun,” he said. “That’s probably my favorite part because I’m wanting people to suggest things for me to do. And I love the challenges that I’ve gotten, like the one where I was challenged to go into a dumpster and try to find donuts.”

Other bits have included Davis asking viewers to translate Spanish to Klingon; accepting a viewer challenge to skip rocks (according to an uncorroborated report from the viewer, Davis lost); reminders to practice good hygiene and not lick strangers, especially during the current pandemic; and an attempt to hypnotize viewers into sending money to his Venmo account.

According to Davis, he wasn’t serious about the request, but he did clear $18.50.

While “Walk’n Around With Chris,” wasn’t conceived to generate income, “Comedy Quarantined” and “Twitching for Laughs” were, at least in part.

Elliot says the first of two shows she hosted for the Stardome generated donations to help the club’s staff. Elliot, too, has needed to find additional paying gigs since her resignation from her TV job, which came just as the novel coronavirus began to close clubs and cancel the gigs she had scheduled in Los Angeles, Atlanta and elsewhere.

As for “Twitching for Laughs,” Genschmer and crew have received some viewer donations, which are being used to help pay the bills at the BIT.

“We chose Twitch because if you can get followers that can come along, it can become easier to be able to donate,” said Genschmer. “And that’s really why we started doing what we did. We were kind of worried, are we going to be able to keep the theatre open?”

That concern is still very much on Genschmer’s mind, but one big plus from the online performances has been the number of new fans the shows have won the theatre.

“We’re reaching people that aren’t from the Birmingham area, which I find fascinating because they’re watching us do things we’ve never done before and they seem to be enjoying it,” he said.

And now plans are in the works to continue the shows, even if the actual brick-and-mortar theatre reopens, according to Genschmer.

“I kind of feel like we’re leaving people in the dark if we don’t maintain some sort of presence with what we’ve established and worked hard to maintain,” he said.

Davis and Elliot also think working online will remain a part of their schtick after clubs reopen.

“I have a strong online following,” said Elliot, so she’ll continue offering her comedy and commentary whether that’s through online performances or tweets and Facebook posts.

Davis said he already wanted to live stream shows, but the pandemic provided the final push.

“What I’ve learned from these shows during the pandemic is it can be done in a bare-bones way that can get a good response from people,” said Davis. “I’m even more enthused and inspired to do it once we get back up and running.”

This Laughter Stuff is Good Medicine

It could be said comedians are a hybrid of philosophers and therapists — therasophers, if you will. They mirror our fears and distill an antidote that goes down easier because of the laughter.

“So many people, surprisingly, have said, we really need this — ‘thank you so much for making us laugh during this time’ — and it’s really pleasing to hear those kind words,” said Davis. “You wonder if you’re making an impact. And, of course, I’m not saving lives or anything, but just a little distraction from what’s going on is so important to people.”