Birmingham Extends Face-Covering Requirement Through May 29 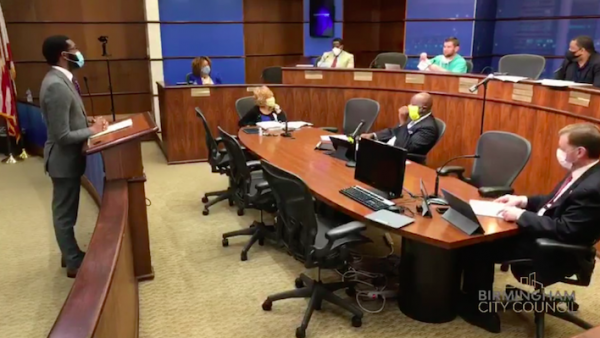 Birmingham has extended its ordinances requiring face coverings in public places through May 29. That’s a week later than the May 22 deadline the council set last week, and councilors have suggested that further extensions are likely as the number of COVID-19 cases in Alabama continues to rise.

The face covering ordinance has been in effect since May 1. It requires residents to wear a device covering their nose and mouth to stymie the spread of the virus. Medical-grade masks are not required; scarves, bandanas or other fabrics will suffice. A document answering frequently asked questions about the ordinance, including a list of exceptions, is available on the city’s website.

Several councilors, including District 8 Councilor Steven Hoyt, vehemently supported the face covering extension. “It’s just to raise awareness of the seriousness of people wearing a mask,” Hoyt said. “We may be a long time, not just until May 29. There may be an opportunity to extend it even further.”

District 2 Councilor Hunter Williams continued his criticism of the ordinance — particularly the penalties, which have been criticized by Alabama Attorney General Steve Marshall. Williams last week suggested that local businesses should be individually able to choose whether or not to enforce wearing face coverings; this week, he remained the sole dissenting vote on extending the ordinance.

While the ordinance does set penalties for violators — a fine of up to $500 and/or up to 30 days in jail — Mayor Randall Woodfin has maintained that police officers will focus more on educating the public than doling out punishment.