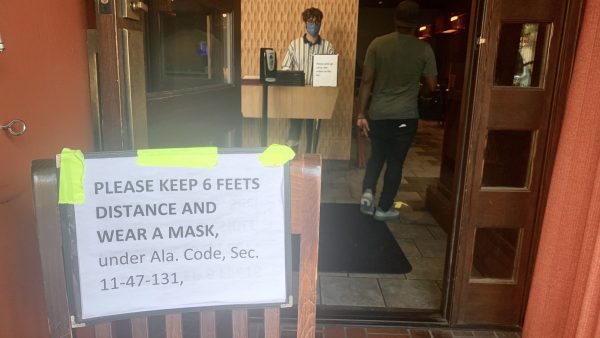 The order, put into effect May 1 to try to slow the spread of the coronavirus, requires Birmingham residents to wear facial coverings — a mask, scarf, bandana or other fabric — while in public spaces where they could come within six feet of another person. A document of frequently asked questions, including the numerous exceptions to the order, is available on the city’s website.

The ordinance’s expiration date had been extended twice — at Woodfin’s behest — by the Birmingham City Council. At the May 26 meeting, however, Woodfin announced he would not ask the council to renew it a third time, though he would continue requiring masks in city facilities.

“The city of Birmingham implemented the mandatory face covering ordinance as an additional level of protection as the state began the phased reopening process,” Woodfin said in a press release. “I want to thank the people of Birmingham for following the law. The ordinance raised the level of awareness to the importance of wearing a face covering when in public and within six feet of other people.”

Woodfin did not specifically explain why he was letting the order expire but urged residents to continue social distancing and wearing coverings in public.

The order’s penalties — which included a fine of up to $500 and/or up to 30 days in jail — had drawn criticism from state Attorney General Steve Marshall, who wrote Woodfin an April 30 letter to “reconsider” those penalties. Woodfin had maintained that the police department would focus on educating the public rather than on doling out fines or jail time.

District 2 Councilor Hunter Williams has been the only vocal opponent of those penalties — and, by extension, the ordinance overall — on the dais. He said Thursday he would continue to vote against extending the order’s deadline. “I am 100% opposed to the extension of a mandatory mask ordinance with overzealous punitive measures,” he said. “We should be approaching the wearing of masks from an educational standpoint and not from a criminal enforcement standpoint.”

Williams added that individual businesses would be able to require masks in their store “if that is something they want, regardless of the city having a mask ordinance.”

But some of the other councilors, including President William Parker, seem poised to go ahead with the extension; Parker and District 9 Councilor John Hilliard told CBS42 that they would vote yes, based on the continued increase in new COVID-19 cases reported by the Jefferson County Health Department.

Woodfin’s office did not immediately respond to a request for comment. The council will meet Friday at 9:30 a.m. in council chambers.