Beef, Poultry Farm Operations Hit By Coronavirus, But Peaches Are On Their Way 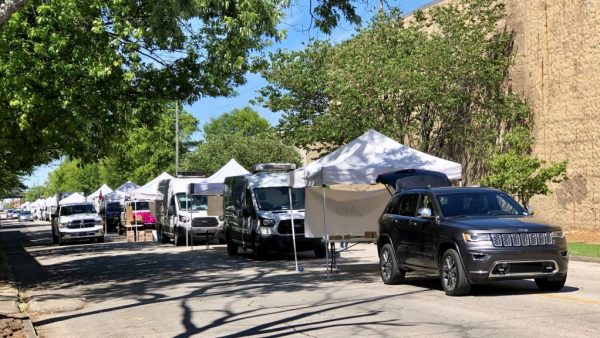 Farmers and other vendors line up with their produce and products to serve customers in the drive-thru market set up for the Market at Pepper Place. The farmers market changed to a drive-thru model because of coronavirus and social distancing recommendations.

Pricing and processing delays caused by the coronavirus pandemic have made a direct hit on the Alabama cattle and poultry industries.

Those were more problems that farmers did not need in the wake of tariffs President Trump imposed on China in 2018 and the swath cut by Hurricane Michael on South Alabama farmlands last year.

“A lot of different things have affected the farmers,” said state Agriculture Commissioner Rick Pate, himself a cattle farmer.

About 600,000 people in Alabama are involved in the farming industry. That includes row crop, fruit and vegetable farmers as well as beef and poultry farmers.

It’s unclear whether row crop farmers will take a major hit this year. Prices for crops are low now, according to agriculture officials, but a lot depends on whether that remains true through the fall harvest.

On the produce side of the table, it appears the pandemic won’t have as big an impact on Alabama’s fruits and vegetable farmers, because most of those crops are sold directly to consumers. A new website, Sweet Grown Alabama, was launched recently to connect consumers with farmers and ease the process of buying and selling produce.

Beef Farming Has Been Affected Most

Beef cattle farmers have taken the biggest hit from the virus. There are many beef processing plants across the U.S., but the big four are JBS USA Holdings, Tyson Foods, Cargill Meat Solutions Corp. and Smithfield.

The companies now are slowly trying to reopen their processing plants.

“The problem is that the big meat packers control the end product. The system is so convoluted,” Pate said.

He and others have asked U.S. Sens. Richard Shelby and Doug Jones to join some Midwest senators in asking the U.S. Justice Department to investigate the meatpackers.

The problem is too many cows and not enough beef processing. When a cow is sold at a state livestock yard, it is then shipped to the Midwest to feedlots, which are close to major meat packers.

The processing plants already had cows on their feedlots and others under contract when the coronavirus caused some plants to slow or close production, said Alabama Cooperative Extension Service agent Mallory Kelley.

“The bottleneck is in the beef processing plants,” Kelley said.

That, Mary J. Wilson, news director for the Alabama Farmers Federation, added, “creates the disconnect between the price farmers are getting and the prices in grocery stores. So farmers are holding back cattle even if it costs them.”

One South Alabama beef farmer explained it this way: “Say hamburger is selling for $4 a pound in the grocery store, and the farmer is paid $1.20 a pound. But since March, the farmer is being paid 80 cents a pound and hamburger is $7 a pound to the consumer. There is no supply and demand.”

Beef farmers were hit by the closings of restaurants that usually bought the higher quality cuts of beef, Pate said, “so consumers are seeing some cuts of beef that they are not used to, but there is quality hamburger meat and roasts. There is plenty of meat,” he added.

Ripple effects from the coronavirus have caused a 10% decline at poultry processing plants, which has raised concern among poultry farmers.

The virus struck workers, primarily immigrants, at some of the state’s 18 processing plants, which slowed work.

Poultry production generates more than $15 billion in economic impact a year, and with the reduced capacity at the processing plants, Pate said, there are fewer batches of chickens going to the farmer, which means less money.

The companies send farmers day-old biddies to raise chickens. Poultry farmers are being asked to keep the birds longer so processing plants can catch up. That means more cost before the farmers can get the chickens into the supply system, Wilson said.

“Who knows what will happen with anything?” asked spokesman Caleb Hicks of the Alabama Poultry and Egg Association.

Farmers are adjusting the light in chicken broiler houses to slow the growth of the birds, and fewer eggs are being set for biddies.

Poultry processing has been a real concern during the pandemic, especially when President Trump said he was going to close the borders. “We have to have legal migrant workers,” Pate said.

Alabama cattle and poultry producers will be among farmers receiving a portion of $16 billion in federal benefits at the end of May as part of a Coronavirus Food Assistance program.

Hicks said the association is talking with Shelby and Jones about future funding in the event of significant losses to poultry farmers.

Pork farming has not been a problem spot in the state; there are only 20 to 30 pork farms in Alabama.

Row Crops, Produce Holding Their Own

Row crop farmers mostly now are planting their crops, such as cotton, corn, soybeans or peanuts, according to state agriculture officials.

Prices for those products are at their lowest since the 1980s, Wilson said.

“It’s difficult, right now, to say how much this will impact agriculture, because row crop farmers are planting and continuing to do regular day-to-day work. But if those prices don’t improve by the fall, it’s going to be a very rough year in agriculture.” she added.

Farmers of fruit and vegetable crops are doing OK, but they have gotten more inventive than usual to sell their crops.

Most Alabama fruits and vegetable crops go directly from the farmer to the consumer through U-picks, farmers markets and roadside stands. Because of social distancing to stem the spread of the coronavirus, farmers markets to implement a drive-thru model. Some also have started online sales for pickup or delivery, Wilson said.

About 30% of the strawberry market is U-pick, and they are available now.

“Some peaches and blueberries are coming from Barbour County now, mostly to farmers markets or stands,” Wilson said. “Chilton County peaches will be available in mid to late May. And next week, sweet corn from Baldwin County should be on the market.

“There have been no issues with the state’s fruit and vegetable crops – no labor issues and none related to COVID-19,” she said.

But Pate is concerned that so much of the state’s peach crop is sold to travelers – think Durbin’s Farm in Clanton – and that because of the coronavirus, the state will not have the number of travelers passing through. “The stands will have to be more creative,” he said.

Consumers looking to buy local products are encouraged to visit the website and search for farmers in their area. Each farmer profile features products grown, location, social media links, website links and ways to purchase products.

The website is part of a branding program for state agriculture products that began in September. It is a nonprofit funded by seven founding members.

“Other states have had branding programs for years; we have been behind,” said Ellie Watson, director of SweetGrownAlabama.

Farmers apply for a license to use the logo for anything grown in the state. The cost of the license is determined by the farmer’s resources. Most resources are below $50,000, and that license cost $100.

There already are 130 farmer members. If the logo is on the product, it is grown in Alabama, Watson said.

Alabama farmers are no slackards.

“Half the peanuts harvested in the nation come from within a 150-mile radius of Dothan,” Kelley said. Satsuma farming in Baldwin and Mobile counties has made Alabama the third leading satsuma-producing state in the nation.

Agriculture products sold in Baldwin County, with its sunny climate, account for more than $120 million a year, with grains, oilseeds, and dry beans and peas accounting for more than $101 million, according to a U.S. Department of Agriculture farm census.

DeKalb County leads the state in production of livestock and poultry products – poultry and eggs and hogs, according to the farm census.

“Alabama farmers are selling all they have,” Pate said. “There are no issues like in other states. No resources are going to waste in Alabama.”

All farmers markets are open in the state, Pate said.

“I am proud to say that there has been no milk poured out, no produce plowed under and no animals euthanized. We have done as well as any other state,” he added. “There is plenty of food, it’s safe and abundant. Poultry is at 90% abundant and we will work things out with the meat processors.

“When we return to normal, I hope a greater number of people will have an appreciation for food.”