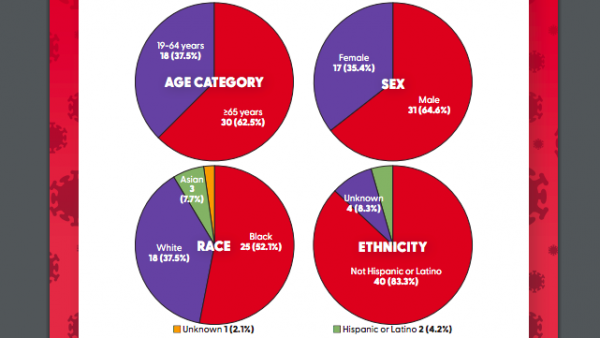 The Alabama Department of Public Health released demographic data on confirmed infections and deaths on the impact of the global pandemic in the state.

Of 39 verified deaths in the state, 17 or 43% were in African American patients and 17 were white. The remaining five were Asian or unknown. The state is investigating additional deaths reported in COVID 19 patients but have not confirmed those fatalities yet.

There were lesser racial disparities in the infections, according to the data. It showed whites represented almost half of all cases, while blacks represented 36.6%. The population of Alabama is 26% black.

There has been limited demographic data nationally so far on COVID-19 patients.

“Black people in Alabama and other places have what I call a triple whammy. Poverty is a factor. Lack of health insurance is a factor, and underlying health conditions are a factor,” said former state senator Hank Sanders of Selma.

While data is limited, other states have also reported disparities. Mississippi health officials said African Americans account for more than 50% of COVID-19 deaths in that state although they make up about 38% of the population.

President Donald Trump said during the White House briefing Tuesday that data is beginning to show that the African American community is “getting hit very, very hard.”

“We have a particularly difficult problem of an exacerbation of a health disparity,” infectious disease expert Dr. Anthony Fauci said during the briefing.

Fauci said it is those same conditions that increase risk for a “bad outcome with coronavirus.”

Alabama is one of about 14 states that has not moved to expand Medicaid under the Affordable Care Act.

The state-released data on COVID-19 showed that while the virus has affected people of all ages, more deaths occurred in people 65 and older. The state also released data on infections in health care workers.

Alabama health officials urged people to continue social distancing to try to limit the spread of the virus.

For most people, the coronavirus causes mild or moderate symptoms, such as fever and cough. But for others, especially older adults and people with existing health problems, the highly contagious virus can cause severe symptoms or be fatal.

As previously noted, older people and people with underlying health issues have higher risks from COVID-19. Twenty-three of the 39 people who died were age 65 or older.

The state said that more than half of the fatalities had cardiovascular disease, and more than 40% had diabetes. Many had multiple underlying medical conditions.

Across the state, there were 116 COVID-19 patients in intensive care and 75 on ventilators.