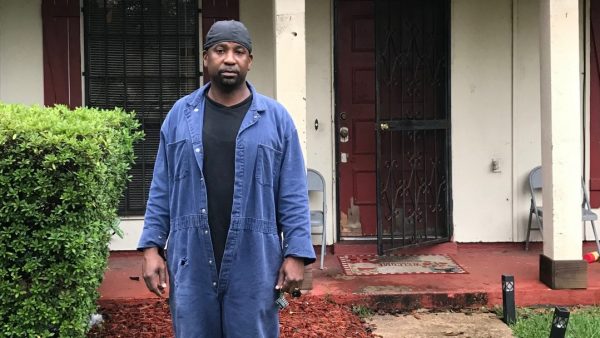 Ron Law, 43, stands in front of his home in Mobile, Alabama. He was a fitter for Austal from 2005 to 2008, where he and other black workers alleged experiencing a hostile work environment and other forms of racial discrimination.

By Maryam Jameel and Joe Yerardi

The Center for Public Integrity

Co-published in partnership with the Center for Public Integrity

Ron Law walked into the breakroom at work one morning and found a noose hanging from the ceiling.

It was one of eight nooses that black employees reported discovering at the Austal USA shipyard in Mobile, according to court filings. They were part of a chilling pattern, the workers alleged: Racist graffiti regularly appeared in the men’s restrooms — the workers described images of hanging men, threats against specific employees and Ku Klux Klan references scribbled inside stalls and on mirrors and walls.

Sometimes, workers said, slurs were etched into the ships Law and others helped build for the United States Navy. Law said he heard a white supervisor refer to black employees as “monkeys” over his walkie-talkie. Law and more than a dozen of his fellow black co-workers sought relief through the U.S. Equal Employment Opportunity Commission, the agency created to eradicate job discrimination and investigate workers’ complaints.

A year later, their case still not resolved, they gave up waiting on the EEOC for help. That’s how it often goes. Each year the EEOC and its state and local partner agencies close more than 100,000 cases. But workers receive some form of assistance, such as money or a change in work conditions, only 18 percent of the time.

John Hendrickson, who spent 36 years as an EEOC attorney in Chicago before retiring in 2017, said too many cases are falling through the cracks.

“In some offices it was really amazing how little discrimination they found,” said Hendrickson, who was head of litigation for a six-state region. “Many of [the cases] weren’t professionally investigated.”

To understand how well the nation protects victims of employment discrimination, the Center for Public Integrity analyzed eight years of complaint data — through fiscal 2017 — from the EEOC as well as its state and local counterparts, reviewed hundreds of court cases and interviewed dozens of people who filed complaints. What emerged is a picture of a system that routinely fails workers.

No group of employees alleging discrimination — age, gender, disability or otherwise — fares well. Race claims are among the most commonly filed and have the lowest rate of success, with just fifteen percent receiving some form of relief. Workers file complaints with the EEOC under penalty of perjury. The agency closes most of them without concluding whether discrimination occurred. Sometimes, workers’ lawyers say, an EEOC investigation involves no more than asking the employer for a response.

A key part of the issue, according to experts and former EEOC employees, is that the agency doesn’t have the resources for its mammoth task. The EEOC has a smaller budget today than it did in 1980, adjusted for inflation, and 42 percent less staff. At the same time, the country’s labor force increased about 50 percent, to 160 million.

If the agency had additional staff, former EEOC Chair Jenny Yang said, it would likely confirm more workers’ allegations of discrimination. It generally takes more time for investigators to make a finding of discrimination than to close a case based on insufficient evidence, she said.

The system’s weaknesses disproportionately hurt black workers. More than a quarter of all EEOC complaints came from black employees alleging racial discrimination. EEOC Commissioner Charlotte Burrows, appointed by President Barack Obama in 2014, acknowledged that the agency is stretched thin. She said it tries to widen its impact through strategic lawsuits and public outreach. Last fiscal year, the EEOC filed 199 lawsuits against employers and won $505 million for workers. The EEOC isn’t even seeing the full picture, Burrows said.

In May 2008, several Austal employees found a noose hanging in the work breakroom. Workers reported seeing eight nooses at Austal on separate occasions.

“The people who come and report to us,” she said, “are sort of a tip of the iceberg of what the problems are.”

What happens to workers the agency doesn’t help is shrouded by a lack of data. But many appear to give up. Many workers who sue — generally permitted only after they seek assistance from the EEOC or its partner agencies — file in federal court, where workplace discrimination cases number less than 15 percent of annual EEOC claims. An increasing share of workers are blocked from suing because their employers require private arbitration, and research suggests flaws in that system have sharply limited the number of claims filed. The Austal workers, for their part, went to court and found legal barriers they could not overcome. They lost in 2015, nine years after filing their EEOC complaints. Not a single employee was compensated. Most were eventually laid off, workers said.

Austal, which denied in court filings that its employees experienced any illegal treatment, did not respond to multiple interview requests. The bar is high for discrimination lawsuits, including those alleging racially hostile work environments. The judge on Law’s case said the evidence did not show “the conduct — apart from the racially offensive graffiti — was frequent, severe, physically threatening (with the exception of the nooses), humiliating, demeaning and/or unreasonably interfered with his job.”

“I don’t know what else you have to do to make it hostile,” Law, 43, said in a recent interview.

For him, the nooses at the shipyard posed a palpable threat: One of the last documented lynchings in the United States took place in Mobile in 1981.

“That was a kicker for me — like you know this really could happen,” Law said.

Read the full investigation by the Center for Public Integrity here.

Editor Note: The Wiggins Childs Pantazis Fisher & Goldfarb LLC is a contributor to WBHM, but our business and news departments work separately.