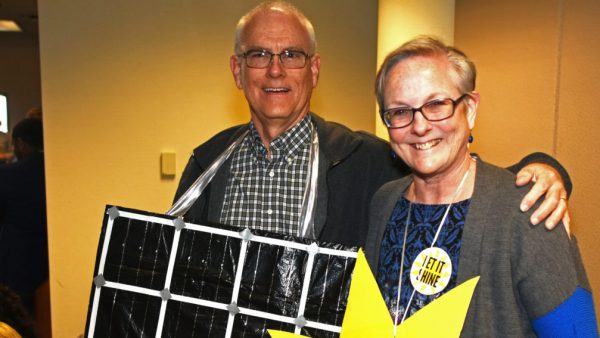 Mobile’s John and Lella Lowe wore their Halloween costumes to the 11.21.19 Public Service Commission hearing in protest of Alabama Power Company’s fee on residents who use solar power. She is the sun, and he is a solar panel.

Spectators – many wearing ‘Let It Shine’ stickers – packed a Public Service Commission hearing room this morning to hear testimony about the fees Alabama Power Company charges residents to use solar panels or other alternative means of power generation.

As the 2½-hour hearing concluded, Administrative Law Judge John A. Garner instructed both sides to prepare briefs to be delivered on or before Dec. 20. The matter will be taken under advisement, and the ruling will be made during an open meeting of the commission.

Two persons were escorted from today’s proceedings for failing to adhere to Garner’s order of no recordings. One woman was shooting video of the hearing while another was livestreaming the event.

Alabama Power charges a monthly fee of $5 per kilowatt of capacity for most customers to connect a solar system to the power grid. The utility company wants to increase that fee to $5.41, while environmental groups say the fee is exorbitant and the power company should be charging no fee at all.

Alabama Power spokesman Michael Sznajderman said the company presented in great detail its case that there is a cost for providing backup service and that persons getting that service should pay for it.

“Customers who choose to have a service should pay for that service,” he said. “If they don’t, then that would be unfairly borne by other customers.”

Keith Johnston, managing attorney with the Southern Environmental Law Center, said the elimination of fees for backup power would encourage the use of alternative power sources, such as solar.

“I think if you look at our neighbors that don’t have that fee or have policies that help promote solar, you can see what’s happening,” Johnston said after the hearing. “You look at South Carolina, you look at Georgia, you look at North Carolina. You see that the jobs are escalating, you see that industry that is coming up out of the blue.”

Natalie Dean, who developed Alabama Power’s backup service charge, spent nearly two hours on the stand. She was repeatedly asked about the decision of Georgia Power, a sister company to Alabama Power, to discontinue charging for backup power.

“That’s something that Georgia Power did in a different jurisdiction,” she said. She said that, when she was calculating the fee, the factors she considered were based on Alabama Power’s costs of providing backup service to customers if they need it.

Attorneys for the Southern Environmental Law Center suggested that the cost of providing backup power for users of solar panels and other alternative power measures is less than the cost of serving other customers. Dean said her calculations were based on Alabama Power being prepared whenever the need arises.

Karl R. Rábago, principal of Rábago Energy LLC, was an expert witness who argued against fees being charged for backup power.

“The purposes of self-generation are to reduce electricity bills, to increase use of environmentally friendly generation and to increase energy self-reliance,” he said, reading from his deposition. “Solar naturally creates a tension with the traditional monopoly utility business model because utilities make profit through the sale of electricity.

“Customer-installed solar cuts into the traditional utility profit-making business model by reducing sales,” Rábago said. “But solar also reduces utility costs, especially because it generates before and during summer peak demand periods when demand and costs are often high.”

Editor’s Note: The Southern Environmental Law Center is a sponsor of WBHM, but our news and business departments operate independently.