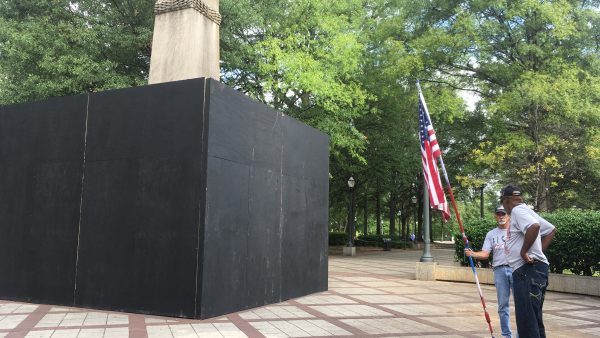 UPDATED — The Alabama Supreme Court ruled Wednesday that the city of Birmingham had violated state law by covering a Confederate monument outside City Hall. The decision reverses a previous ruling by the Jefferson County Circuit Court and orders the city to pay $25,000 in penalties to the state of Alabama.

The monument in question, in Birmingham’s Linn Park, was ordered covered in August 2017 by then-Mayor William Bell following deadly riots surrounding a Confederate monument in Charlottesville, Virginia. The monument, then-City Council President Johnathan Austin contended, “celebrate(s) racism, bigotry, hate and all those things that the South has been known for.”

By covering the monument, Bell said he intended to “challenge” state law, specifically the just-passed Alabama Memorial Preservation Act of 2017, which prohibits local governments from moving or altering historically significant buildings or monuments that are more than 40 years old without permission from the state. The Confederate Soldiers and Sailors Monument was first placed in Linn Park by the Pelham chapter of the United Daughters of the Confederacy in 1905.

By covering the statue with a black plywood screen, which surrounds but does not touch the monument instead of tearing it down, Bell reasoned that the city would still “comply” with the law. But state Attorney General Steve Marshall disagreed, quickly suing the city and arguing that the screen violates the part of the act prohibiting monuments from being “altered” or “otherwise disturbed.”

In Wednesday’s ruling, the state Supreme Court affirmed Marshall’s argument. “The parties agree that the monument in this case was intended as a ‘permanent memorial’ to a group or to military service,” the ruling reads. “However, the monument in its current form — covered by a 12-foot plywood screen around the base — memorializes nothing. Members of the public passing through Linn Park could have no way of knowing what the marble shaft rising from behind the plywood screen was intended to memorialize.”

Rick Journey, Woodfin’s communications director, said in a statement Wednesday afternoon that Woodfin’s office is “strongly disappointed” with the ruling but had not yet decided on a course of action.

“This ruling appears to be less about the rule of law and more about politics,” Journey said. “We are carefully reviewing the opinion to determine our next step, but clearly the citizens of Birmingham should have the final decision about what happens with monuments on Birmingham city grounds.”

Earlier this year, Jefferson County Circuit Court Judge Michael Graffeo ruled that the AMPA violated the city’s right to free speech: “Just as the state could not force any particular citizen to post a pro-Confederacy sign in his or her front lawn, so too can the state not commandeer the city’s property for the state’s preferred message,” he wrote. “A city has a right to speak for itself, to say what it wishes, and to select the views that it wants to express.”

Instead, the Alabama Supreme Court contends, city governments are “mere instrumentalities of the state” which possess “only such powers that have been delegated to them by the Legislature.” Because no individuals were named as defendants to the case except for Mayor Randall Woodfin, who was a defendant only in his official capacity, the court argues that no constitutional rights to free speech have been violated by the AMPA.

The ruling sends the case back to the Jefferson County Circuit Court with instructions to issue an order fining the city $25,000. That’s significantly less than the damages requested by the state, which had amounted to $25,000 per day the monument was covered. That amount would have totalled $20.85 million.

Woodfin’s office has yet to issue a response to the ruling, but representatives have confirmed one is forthcoming.