Drawing a More Diverse Crowd to the Outdoors 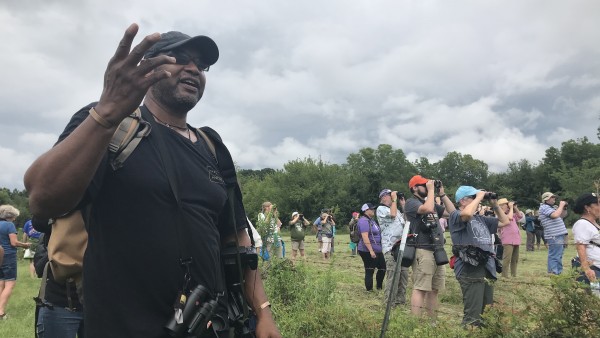 J. Drew Lanham has often said birding is "one of the whitest things you can do." He's leading a group of birders with the Birmingham Audubon Society in hopes of attracting more people of color to outdoor pursuits.

Early on a humid Saturday morning, more than 100 people strap on binoculars and head to the Joe Farm near Greensboro in the Black Belt. They’re here to see birds – specifically Mississippi Kites. The farm’s owner, Cornelius Joe, is determined to deliver. He hops on his tractor and starts cutting hay. That shakes loose all sorts of big bugs – bugs Mississippi Kites love to eat. And it works. Within seconds, these birders get a prime view of a Kite that swoops down to feast on grasshoppers.

J. Drew Lanham, author and professor of wildlife ecology at Clemson University, is leading this Birmingham Audubon Society birding trip. And as a black man, he knows it’s not every day you see someone who looks like him leading a group into the outdoors. “Birding has been for a very long time a really homogenized milky-white kind of endeavor, he says. “I’ve always said it’s one of the whitest things that you can do, but here I am a black man doing it.”

Part of the reason there aren’t many like him, he says, comes down to opportunity and exposure.

“Sometimes if you’re shut out, if you are deliberately kept away from from these activities, if it’s promoted as something that’s not for you, then you tend to stay away from it,” he says.

Ornithologist J. Drew Lanham says this birding trip led by black birders such as himself on black-owned land was significant. Gigi Douban, WBHM

Lanham says to have black birders lead a trip like this provides the optics that have been missing for a long time from these pursuits. But he says it’s also good role modeling for other people of color who want to dip a toe into the outdoors. Black outdoorsy role models are one thing Jason Ward says he never had. Ward hosts a web series called “Birds of North America.”

“When I was younger, I loved nature. I loved animals,” Ward says, “but when I turned on ‘Animal Planet’ on Nat Geo, no one looked like I did.”

So he kept it to himself. And he says that could’ve killed his dream of a career in conservation.

“Just the simple fact that I had this misconception in my mind that it wasn’t for me,” Ward says.

Even now, he says, from time to time he has to shake off imposter syndrome.

“When I’m out in an unfamiliar environment just with my binoculars and cameras innocently birding,” he says. “I’m wondering ‘Ok, do people think I’m up to something?'”

Ward is another leader on today’s birding trip. He says it’s up to various outdoor recreation groups to do what the Birmingham Audubon Society is trying to do with this trip – attract a more diverse audience to the outdoors.

“Our position at Birmingham Audubon is that the makeup of a birding trip should look a lot like the communities in which we live and work, and if it doesn’t then we’re probably doing something wrong,” says Ansel.

Green never felt like she belonged in the outdoors. She was a pretty sedentary kid.

“I was an overweight child and no one thought that I could go outside and do anything,” she says.

She struggled with depression. It wasn’t until she was in her 40s that she discovered walking and nature as a way to find the quiet spaces she craved. She says it helped her mental health so much she wanted to share it with others. With Brown Girl Walking, Green and a group of other women of color explore different parks around the city. “And at first it was for weight loss and all these other things. But now it’s just a platform that I built to show that brown girls can just go out and walk whether it’s two minutes or five miles,” she says.

Green says it’s not about weight loss anymore. Her mission is to keep showing other women of color how the outdoors is for them as much as anyone else.