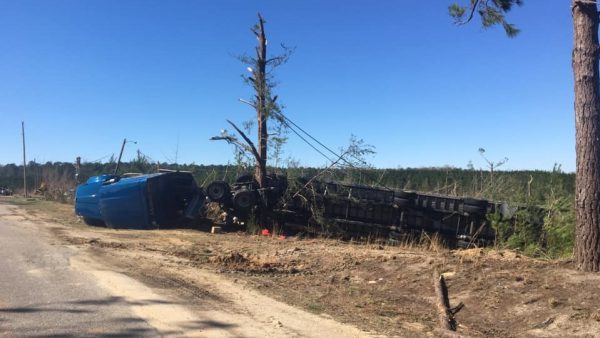 An 18-wheeler wraps around a tree in one of the worst hit areas of Beauregard. This is down Lee Road 39, which is what some residents now call "death alley."

Patricia Moore and her family spent much of today cleaning up the debris around her sister’s heavily damaged house. Adults used chainsaws to cut trees. Children together hauled the logs out to the front of the property. It’s hard work physically and emotionally.

“My friend – my friends and her husband’s gone. I’m just devastated,” Moore says.

Source: Miranda Fulmore,WBHM
Johnny Washington sits on a four-wheeler outside his damaged home. He is about preparing to go around his property to survey damage.

The tornado struck Sunday afternoon not long after many people had returned home from church. Johnny Washington was sleeping in his mobile home when he heard the tornado, and it sounded just like they say – a train.

“Being from Beauregard, you know there’s no trains in Beauregard,” Washington says. “So I was like, you know, where’s that train coming from? And then when I looked out the window, I saw what I saw – total destruction. Wind and trees and cow – I saw everything in the air.”

Washington’s home is now in pieces. Metal roofing is scattered across the yard. Pink insulation is tangled in the trees.

Lee County Sheriff Jay Jones says so far 23 people died in the storm, but search and rescue efforts continue because there are dozens still missing.

“I have not seen this type of level of destruction ever in my experience here in Lee County. And that covers a span back – I know for at least 50 years, we have not had anything of this nature before,” Jones says.

More than 50 patients were taken to the local hospital. This is even though the tornadoes were expected well in advance of when they hit. The first National Weather Service warnings came last Thursday.

“This was the deadliest tornado in the United States since the Moore, Okla., tornado in 2013 and also the first tornado fatality in the state of Alabama since November 30 of 2016. That was in north Alabama,” says Chris Darden, meteorologist for the National Weather Service.

He classified the tornado as an EF4, meaning the winds were around 170 miles per hour, and described the destruction as vast.

“I walked the track here on highway 11 earlier, and I estimated the path width at .87 miles or almost a mile wide – so a monster tornado as it moved across the area,” Darden says.

Source: Miranda Fulmore,WBHM
Only the front stoops are left standing outside what used to be a mobile home on Lee Road 39.

This is in a rural county and an area where many homes don’t have basements where they can shelter from tornadoes.

And there are many mobile homes that offer little protection from such extreme weather. Patricia Moore says the scope of the destruction is hard to believe. It just seems unreal.

Many of the dead were found just a few streets over from here. Some locals are now calling it death alley. This is where first responders will continue their search for victims come morning.