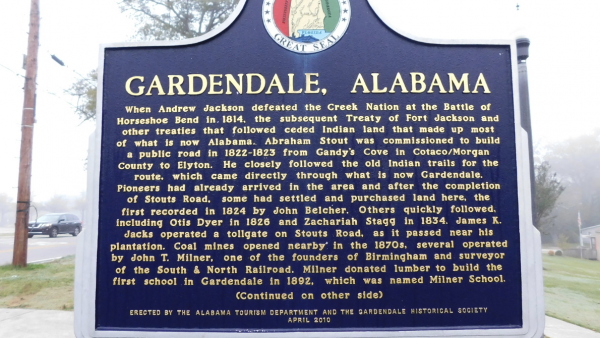 The NAACP Legal Defense Fund got an early Christmas present this week, at the expense of the city of Gardendale.

In what may be the last act in the six-year-long saga of the city’s abortive attempt to break away from the Jefferson County Schools, U.S. District Judge Madeline Hughes Haikala ruled on Monday that Gardendale must reimburse the LDF and attorney U.W. Clemon for costs and legal fees incurred in their effort to stop the breakaway. That effort was victorious for Clemon and his team when the 11th Circuit Court of Appeals ruled that Gardendale could not split from JefCoEd because the proposed split was motivated by racial animosity.

Robert Carter, BirminghamWatch
Former federal judge U.W Clemon, now a private attorney, is shown outside the 11th Circuit Court of Appeals in Atlanta in 2017 after a hearing on Gardendale’s move to form its own school system.

Haikala ruled that Gardendale must pay almost $850,000 in fees and expenses because their effort was in bad faith, and that awarding those fees to the LDF and Clemon “…hopefully will prompt more respectful arguments in the future.”

Haikala originally ruled in 2016 that Gardendale’s proposed breakaway did have a foundation in citizens’ concerns that the city would become like neighboring Center Point, which has seen a demographic reversal from mainly white residents to majority black in the period from 2000 to 2010. Many of those concerns were expressed online in social media such as Facebook; those comments became part of the arguments by the LDF and JefCoEd that the new system should not be allowed to form.

The original ruling by Haikala still granted Gardendale a partial break from the county system with supervision by the federal court, but all parties appealed that ruling to the 11th Circuit. Clemon and JefCoEd attorneys argued that the decision should have been an all-or-nothing ruling, and since Haikala had found racial bias involved, federal law dictated that the ruling should be against the breakaway. The appeals court unanimously agreed and remanded the case back to Haikala, who then fully denied the breakaway.

Efforts by Birmingham Watch to reach a representative of JefCoEd, Clemon and Gardendale officials for comment on the latest ruling have been unsuccessful so far during this Christmas week.

This week’s ruling concerned only fees and expenses claimed by the LDF and Clemon — a former federal judge who was on the original LDF legal team that filed the landmark Stout vs. Jefferson County Board of Education desegregation case in the 1960s and early 1970s. Since then, Clemon served on the federal bench from 1980 to 2009, with seven years as the chief judge for the Northern District of Alabama. He entered private law practice again after leaving the bench and took on the Gardendale case. Earlier this year, JefCoEd announced plans to name a new elementary school in the Adamsville area after Clemon.

The county system remains under the supervision of the federal courts, with Haikala being the judge presiding over the case since her appointment in 2013. Former Superintendent Craig Pouncey announced earlier this year that JefCoEd would file motions that would finally start a push to attain “unitary status,” the legal designation that the system is no longer segregated and has no further need of the federal supervision it has labored under since 1971. Pouncey’s successor, Walter Gonsoulin, said recently that the process would take about three years, with certain goals to be attained to the satisfaction of Haikala and the U.S. Department of Justice before unitary status is granted. The Gardendale breakaway effort had delayed that process because the new system would have affected racial demographics in the system, Pouncey said.