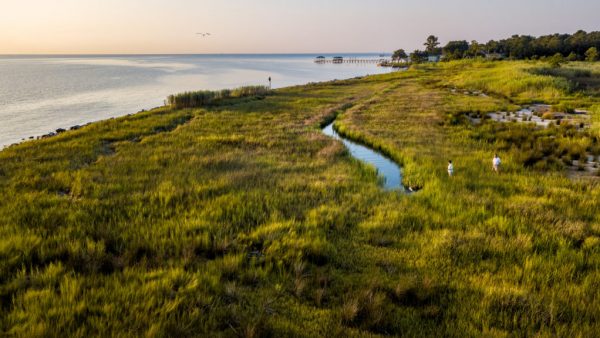 Some Alabamians and the politicians they elect traditionally have denied global warming.  But many people in coastal Alabama are preparing now for what they fear will be inevitable consequences of increased warming of the air and oceans. They see Mobile Bay and the Alabama coast as uniquely susceptible in the state to harm from forces of nature.

Money for their programs comes from a variety of public, private and institutional sources. Some dollars are being generated from a man-made disaster in the past – the BP Horizon oil spill. It’s being spent to help prepare the shoreline and bay for man-made disasters ahead as scientists say temperatures and sea level will rise, storms intensify, and the state will be slammed with more torrential rain alternating with periods of severe drought.

Here are two examples of those efforts.

Judy Haner heads the Alabama chapter of nonprofit The Nature Conservancy, part of a collaboration of entities using oil spill money from the National Fish and Wildlife Foundation to restore 40 acres of marsh, tidal creeks and other habitat for fish, shellfish and birds in Bayou la Batre.

That small fishing and seafood processing town has not fully recovered from the twin hits of Hurricane Katrina in 2005 and the BP Horizon oil spill five years later.

“The Lightning Point project near the town’s city docks will enhance the shoreline for the future, helping buffer some of the impacts of storms,” Haner said. “It won’t stop a Cat 5 but will provide a first line of defense so when events do happen, it’ll be able to bounce back better. It will let the storm surge into the marshes, which act as a sponge, and then drain back.”

The Nature Conservancy
Segmented, off-set rock barriers will be placed in the first stage of the Lightning Point project. Dredge material to be pumped in to create substrate for new marshlands. Rock jetties at the left will protect access to the city docks.

The plan calls for building a series of breakwaters along the shoreline on both sides of the bayou’s navigation channel to buffer waves and the wakes of barge and other traffic. More than 300,000 yards of material dredged almost 70 years ago to create the intercostal waterway will be pumped inside the breakwaters to provide a matrix for native marsh grasses that will be planted. Then the tidal creeks that have become clogged will be opened up and connected with the Mississippi Sound again.

Two new 700- to 800-foot jetties extended from the bayou mouth will keep the navigation channel accessible to vessels and provide footing for fishing for the local community and its visitors.

“Right now there’s just a little shoreline that’s being lost to erosion,” Haner said. “We’re very optimistic that this project will have a big, protective impact on Bayou la Batre.”

She said Lightning Point will be built to withstand future sea level rise. “We’re designing this for the long-term, with large rocks for the segmented breakwaters so when it needs to be beefed up, you can just stack more rock on top.”

The project also will include a walking trail along the shore and a pavilion where visitors can look out over the marshes and the waterfowl and migratory birds expected to inhabit them.

While Lightning Point is its largest restoration effort around Mobile, The Nature Conservancy is involved in other projects. It has created oyster reefs to limit erosion and protects several acres of seagrass and marsh habitat at Coffee Island, a barrier island just offshore from Bayou la Batre. Along with nearby Marsh Island, maintained by the Alabama Department of Conservation and Natural Resources, Coffee Island is home to a large bird population. The two eventually will be home to additional birds that currently inhabit tiny, privately owned “rookery” islands nearby, when those disappear beneath the rising Gulf waters.

The Conservancy works on small projects as well, helping add improvements in front of bulkheads erected by individual landowners on rivers being eroded by boat wakes. Increasing numbers of individuals are asking for help in creating “living shorelines” with grasses that can provide bird and fish habitat, survive boat wakes and absorb most of the lawn fertilizer runoff to keep it from reaching the estuary where the river enters the bay.

The organization helps monitor diamondback terrapins and other species, including certain sea turtles, which she said “are extremely sensitive to thermal changes in the environment and therefore are an ideal ‘sentinel species’ for looking at the impact of global climate change.”

The Nature Conservancy is an environmental nonprofit organization founded in the U.S. in 1951. It has grown to more than a million members and 400 scientists and works across six continents.

In 1987, the U.S. Congress amended the 1972 Clean Water Act to create the National Estuary Program to protect and restore water quality and resources of estuaries of national significance. The Mobile Bay estuary program became one of the nation’s 28 programs in 1995. It is administered by the U.S. Environmental Protection Agency.

The program is charged with creating a Management Conference that brings together dozens of public and private entities to identify issues impacting every tidally influenced watershed along the Alabama coast, according to Director Roberta Swann. It’s what Swann calls a “backbone organization,” overseeing development of management plans for each watershed and helping find matching funds for federal grants.

Among other functions, the Mobile Bay NEP helps secure funding for high priority projects and avoid duplication of efforts. State and local governments, industry and businesses, the State Port, environmental groups, academic institutions, and individual community members and grassroots organizations are involved. Surveys, studies and public meetings over a 15-month period help identify the issues and values that concern local communities in each watershed.

Funding comes from many sources, including the Restore Act, the National Fish and Wildlife Foundation, Gulf Environment Benefit Fund, and the state transportation and environmental management departments.

All of the watershed plans are required to consider climate change issues, Swann said. “Communities are educated about scenarios of sea level rise and storm surge, for example, and provided with data from FEMA and the Army Corps of Engineers that predicts what their area might look like in the future depending on different hurricane categories. This helps communities understand what the future holds for them.”

Mobile has one of the highest annual rainfalls in the nation, averaging almost 66 inches. If the intensity of rainfall increases as expected with global warming, stormwater runoff carried over asphalt, concrete and other impervious landscapes has to be considered in watershed planning, as does pollution from agricultural and landscaping fertilizer, Swann said.

Rainfall intensity also increases the velocity of large and small streams, scouring their banks and dumping more sediment into the waters flowing to the estuaries where the rivers enter the bay.

Those issues were among those addressed in the program’s signature accomplishment, a 10-year effort to restore the D’ Olive Watershed in a highly developed part of the cities of Spanish Fort and Daphne, on the bay’s eastern shore.

“We had to start in the headwaters of D’Olive Creek and its tributaries and work our way downstream to stem all the sediment that had filled in Lake Forest Lake and D’Olive Bay,” Swann said.

Ninety percent of the sediment was reduced in one tributary, Joe’s Branch, where steep slopes and highly erodible soil were so extreme that bank erosion was endangering a subdivision, she said.

“Traditionally, you might have managed the additional water running through the streams by putting in concrete culverts, but new, low-impact development techniques such as using rock to create step-pools, coconut mats to keep sediment in place, even placing logs to allow us to manage the velocity of the water so it doesn’t erode the stream banks,” Swann said. Now vegetation can again grow along the banks, and fish and wildlife return.”

Watershed management also involves changing the regulatory environment to address the causes of problems. “Before stream restoration was even begun, we encouraged Daphne and Spanish Fort to pass complementary development guidelines for subdivisions to create buffer zones so houses can’t be built right up to the stream edges anymore,” she said.

The success of the D’Olive Creek project attracted the attention of Mobile city officials, which led to restoration of Three Mile Creek with flood and trash abatement features in a largely low-income, African American neighborhood.

Swann said, “Because we identified that area as vulnerable to future impacts from storm surge and flooding, Mobile County is improving drainage throughout the creek’s Toulmins Spring Branch, and the federal Natural Resources Conservation Service is addressing headwaters issues all the way down to its confluence with Three Mile Creek. The point is, with a comprehensive plan in place, we don’t just deal with an isolated stream.”

The Mobile Bay NEP recently completed restoring the badly eroded marshland at the tip of Mon Louis Island, where Fowl River enters Mobile Bay along its western shore. The area had been ravaged by storm surges and winds, Swann said. With the consent of landowners, more than four acres of marshland was created, bringing the island’s shoreline to its 1995 footprint and providing a buffer against storms as well as habitat for marine life.

Overall, Mobile Bay drains three-quarters of Alabama as well as parts of Mississippi, Georgia and Tennessee. “We’re at the bottom of it, so to deal with sediment loading and siltation, we have to reach out to our upstream neighbors and encourage them to zero in on storm water and trash management through our Clean Water Future program and other means,” Swann said. The city of Birmingham is a participant.

Over the next year, BirminghamWatch will visit places in Alabama where ways of life have been affected as climate changes and look at what’s being done to mitigate or avoid the effects. This is the fourth in a series of four stories from Alabama’s Gulf Coast. Read the earlier stories:

In Pursuit of the Disappearing Alabama Oyster. Will They Ever Return?

Cloudy Future for Dauphin Island, a Canary in the Coal Mine of Climate Change