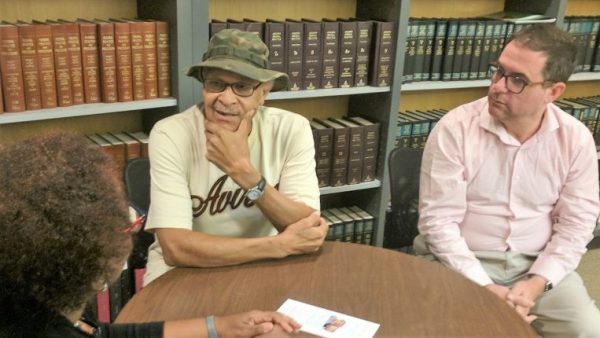 For Mike Letson, Whitson’s LSA attorney, what he did for Whitson is more than a job, it’s a passion. “

“You feel you are on the right side of justice,” he said.

However, the program that Whitson and Letson praise has been controversial, the frequent target of partisan political battles since its start in the mid-1970s, with roots in the nation’s War on Poverty. Now the Alabama program’s federal parent, Legal Services Corporation, once again faces defunding, this time in President Donald Trump’s 2019 budget proposal.

Justifications for defunding the LSC include concern about the program’s lack of accountability measures and the value of transferring responsibility to the states to “encourage nonprofit organizations, businesses, law firms and religious institutions to develop new models for providing legal aid.”

Historically receiving support from Democratic politicians, bar associations and social service advocates, Legal Services has been criticized by some conservative groups and marked for elimination by Republican administrations multiple times in its 44-year history.

In the budget proposal of the current Republican administration, Legal Services is among almost 100 agencies and programs slated to be defunded immediately or over a multi-year time period. Of these, 66 agencies have operations in Alabama, a state heavily dependent on federal funding.

The cuts are outlined in “An American Budget,” released by the White House in February. The fiscal year 2019 budget draft proposes program eliminations and rule changes with a goal of reducing the federal budget by $3 trillion, according to the Office of Budget Management, which published the proposal and supplemental documents.

The 202-page 2019 Major Savings and Reforms document would reduce Legal Services’ 2018 budget of $385 million to $18 million for a first-year savings of $367 million, and it would call for eventual total defunding.

Despite the president’s proposal, 2019 funding for LSC has been moved forward by Congressional committees. According to the American Bar Association, which has lobbied for maintaining and increasing support for Legal Services, the Senate and House Appropriations Committees included level funding for LSC in fiscal year 2019 legislation over the summer. No final appropriation votes have been held.

History Begins With War on Poverty

Sparked by a Democratic president’s War on Poverty and made official with the signature of a Republican president, Legal Services Corporation has been a political football since its inception as a federal nonprofit in 1974.

Its roots began with President Lyndon Johnson’s Office of Economic Opportunity, which first funded legal services to needy citizens in 1965 and was led by Peace Corps Director Sargent Shriver. The OEO efforts drew some criticisms especially at the local level, and when funding expired for OEO and President Richard Nixon took office in 1969, the OEO ended.

In the 1970s, bi-partisan efforts began to establish a stand-alone federal legal services group. The legislation that created Legal Services Corporation was approved by the House on July 16, 1974, and by the Senate two days later. President Nixon signed the LSC Act on July 25, 1974.

The new law stated that Congress had found “there is a need to provide equal access to the system of justice in our Nation.”

In the 1980s, Republican President Ronald Reagan challenged LSC and sought to defund the program. Reagan made recess appointments, without confirmation, of Legal Services critics to the group’s national board to push for changes.

Funding continued, however, and Reagan and other LSC critics settled for more restrictions on the type of legal services LSC could support, with class action lawsuits and political lobbying being expressly forbidden. A decade later, then-Speaker of the House Newt Gingrich, Republican from Georgia, challenged LSC but failed to eliminate funding for the program.

Over the years, critics and even some supporters of LSC cited concerns about a lack of internal controls, allegations of lavish spending by some executives and poor management at Legal Services offices. In 2014-15, the Justice Department prosecuted four cases of fraud among employees of Legal Services groups.

Active in Alabama since the mid-1970’s, Legal Services in the state consolidated three organizations in 2004 to form Legal Services Alabama, part of a national push for efficiency. That organization now serves all 67 counties, said Jaffe Pickett, deputy director of LSA, which is headquartered in Montgomery. It handles only civil cases, no class action cases and no criminal cases.

“LSA is the only organization providing high-quality free legal services in all 67 counties in Alabama with a focus on rural services delivery,” said Jaffe, who also manages LSA’s development efforts to seek local contributions that supplement LSC funding, which provides the majority of LSA’s $6.88 annual budget.

Legal Services Alabama has seven offices with 79 staff members, including 48 attorneys. Offices are in Birmingham, Anniston/Gadsden, Dothan, Huntsville, Mobile, Montgomery, Selma and Tuscaloosa. LSA handled more than 10,900 civil cases for clients statewide in 2017, according to its 2017 annual report.

Faced with the prospect of losing its funding, LSA officials pointed to the clients they help and the programs Legal Services and its partners provide.

Ronald Whitson, the veteran whose family home was at stake when Legal Services Alabama represented him, believes eliminating Legal Services would be disastrous for those who depend on it.

“The thing is, people need this type of program. But folks in power don’t look at it that way,” Whitson said as he sat beside his attorney, Michael Letson of the Birmingham office, and recalled the predicament that brought him to LSA.

When Whitson’s mother died, the North Birmingham house she’d worked hard to purchase for her family had no clear title and no will could be found. Whitson, who served in the Army from 1969 to 1974, knew he needed legal help.

“Other lawyers, they weren’t interested, wouldn’t touch it with a 10-foot pole,” he said.

Whitson’s situation is a good example of the work Legal Services attorneys perform for clients, said Barbara Luckett, a 25-year LSA employee and now managing attorney for the Birmingham office.

The Birmingham office, located downtown near the courthouses and employing 11 people, includes eight attorneys who closed 1,705 civil cases in 2017. Housing, family law and consumer protection are the top areas of civil law handled by LSA. But LSA attorneys also work in elder law and provide legal help to veterans, victims of domestic violence and those affected by natural disasters, Luckett said.

The newest LSA programs include enhanced outreach to low-income veterans and people newly eligible to have their voting rights restored after serving criminal sentences. LSA also works to educate clients about consumer debt, including the pitfalls of title loans and pay day lenders, and helps clients stop garnishments from these high-interest lenders. Helping clients navigate the court system to save a house, stop an eviction or settle family issues is LSA’s core work, Luckett said.

But Letson, Whitson’s attorney, illustrates the scope of LSA’s work. He provided legal assistance to those hit by 2011 tornadoes near Hackleburg. Legal assistance to victims of natural disasters is also part of Legal Services’ mission.

“To say we help poor people is true, but many clients are in transition,” Luckett said. “Some spiral into poverty because of job loss, divorce, getting sick or having a sick child, all situations that can change a family’s financial situation quickly. At any time, any one of us could be one of those people who cannot afford justice.”

LSA is the only organization providing these services in Alabama, the sixth poorest state in the nation with 300,000 children living in poverty, legal services advocates emphasize.

Attorney LaVeeda Morgan Battle, former administrative judge for the U.S. Equal Opportunity Commission in Birmingham, said, “No one else provides the help that Legal Services does. No one.”

“If the justice system is to work, there has to be access to representation and representation with specific expertise like Legal Services attorneys have,” said Battle, who noted that close to a million people live below the poverty line in Alabama

“Many clients I see in district court, if they didn’t have a Legal Services attorney, they would be adrift in the system. Legal Services provides a voice for those who don’t know how or can’t speak up for themselves,” Grant said.

“The court system can be intimidating,” she said, noting that civil case results can have long-term effects on a family’s well-being.

“Legal Services does a wonderful job for the clients every time they are in my courtroom,” she added.

LSA has been able to boost services beyond the federal budget allotment with grants from seven foundations, agreements with the cities of Birmingham, Tuscaloosa, Dothan and Mobile and partnerships with many organizations, said Pickett. The United Way of Central Alabama helps support LSA services including those for the elderly. Volunteers from the community, bar associations and law schools also help, and several Volunteer Lawyers Projects provide on-going pro bono legal work in every Alabama county.

Even after a quarter century doing legal services work, Luckett said the civil and family side of domestic violence can be among the toughest and most-needed aspects of LSA work. While not involved with any criminal charges resulting from domestic violence, LSA attorneys work with police, who often point victims to Legal Services for help with civil matters. Securing Protection from Abuse orders and helping with child custody, separation and divorce are among services LSA provides to domestic violence victims. The group also partners with One Place Family Justice Center, a nonprofit brought to life by another former LSA attorney, Allison Dearing.

Now executive director of One Place in Birmingham – where victims of domestic violence, elder abuse, stalking and sexual violence receive a variety of services – Dearing credits her work at LSA with cementing her dedication to helping others.

“Civil legal assistance helps level the playing field between a person who can afford an attorney and one who can’t. Seeking justice in America should not be based on your bank account,” Dearing said. “Particularly for victims of domestic violence who are attempting to escape a dangerous relationship, legal representation in divorce or protection order cases can literally save a life.”

Dearing’s first job as an attorney was at Birmingham’s Legal Services office.

“So much of who I am today – as a professional, a lawyer, a woman, and a human – is because of what I learned practicing law at Legal Services Alabama,” Dearing said. “I had the privilege of learning from my courageous clients who had so much to give.”

Potential clients can access Legal Services Alabama and apply for assistance through a toll-free number to a statewide call center, at 1-866-456-4995. Originally set up to handle calls after 2005’s Hurricane Katrina, the call center is often the first point of contact. In 2017, the call center took 38,000 calls and processed more than 3,800 applications, according to the nonprofit’s 2017 Annual Report.

Read a copy of “An American Budget,” President Trump’s proposed budget for 2019 and the budget’s Major Savings and Reform document, listing all the proposed eliminations and reductions in Trump’s An American Budget.

Gov. Kay Ivey was sworn in this morning along with other constitutional officers in a ceremony of pomp and circumstances on the red carpet-lined steps of the Alabama Capitol.

A gasoline tax increase to fund road improvements is expected to be a major topic of the 2019 Alabama legislative session.

In a recent meeting during which two new Birmingham City Council members were appointed, councilors gave clear signals that they’re ready to take on a rewrite of the law that governs separation of powers in Birmingham’s municipal government.

Several schools in the Birmingham metro area show significant improvements in achievement in this year’s Alabama State Report Card, which grades the performance of public schools.

Alabama Attorney General Steve Marshall was criticized for taking over the case of the shooting death of a black man by police, but his office says intervening in cases held by local district attorneys is common.