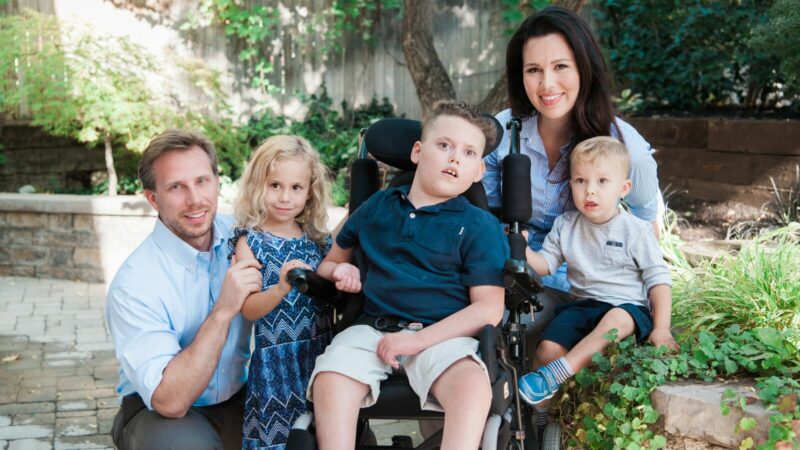 The Mights, from left to right: Matthew, Victoria, Bertrand, Cristina, and Winston.

Medical treatments sometimes have to take a best-guess, one-size-fits-all approach. But those treatments don’t always work the same way for everyone. Precision medicine is an emerging way to care for patients that considers their individual genes, environments, and lifestyles. The idea is to customize treatment based on a person’s unique data. So UAB recently opened the Hugh Kaul Personalized Medicine Institute. And for Matthew Might, its first director, the reason he got into the field was deeply personal.

After Might and his wife Cristina had Bertrand, their first child, 10 years ago, they began to notice something wasn’t right.

“He had unusual movements. Eventually we realized he was having seizures,” says Might. “Over time, it became clear he had a severe developmental delay, and strangely enough, a lack of tears.”

Bertrand couldn’t make tears even when he was clearly in distress. They spent two years seeing specialists all over the country. Then Might had Bertrand’s genes sequenced. Two years after that, Might and Cristina learned Bertrand had a disease so rare it had no name.

“He was literally the first patient ever discovered with an ultra-rare genetic disorder,” Might says. “He had inherited two mutations in a gene called NGLY-1, one from me, one from my wife, that knocked this gene out. He was the first NGLY-1-deficient patient in the world.”

That meant Bertrand lacked an enzyme that helps the body get rid of malfunctioning proteins. At the time, Matt Might was a computer scientist. But the situation changed his path.

“That sort of pushed me into this odyssey of, okay, well, we’ve got an answer. Now what? That’s when I moved into therapeutics and learned a lot about pharmacology [and] what eventually became precision medicine.”

“And ultimately,” adds Might, “five years after that, we have treatments for him that were discovered through me sort of learning all this as I went. When it’s your child’s life on the line, you will do whatever you can for them.”

Bertrand still needs a wheelchair, but he’s doing well, considering. That’s thanks to a treatment his father discovered containing sugar derived from shellfish shells. Might says lots of people helped him figure it out, and it took reams of data.

Stephanie Devaney, deputy director of “All of Us,” a research program at the National Institutes of Health, says the medical profession has been doing its best to individualize care all along, “but it’s hard without the data sets that we need. There are just way too many variables across people.”

So the project is recruiting people to share their medical records through providers like UAB. They can also upload data themselves. The goal is to enroll at least a million people “so that we can really get a sense of people across their lifespan,” she says, “to get to a place where we’re able to apply precision medicine across many more diseases and conditions.”

Devaney wants the data pool to match the diversity of America, and she says data from UAB will help. But it’s not just diversity in subjects or patients she’s looking for: it’s different types of people who will use the data — people like Matt Might.

“It’s incumbent on us to allow citizen-scientists to use the data,” says Devaney. “And so we like Matt’s story because he took things into his own hands, and we’re hoping our program will foster some more of that.”

The UAB program is working on faster, safer, personalized treatments for rare diseases, cancer, and depression. And it’s using genetic data to predict which drugs will help and which are likely to cause side effects or lead to addiction.

The more data collected, Might and Devaney say, the better doctors can tailor treatments for each patient.