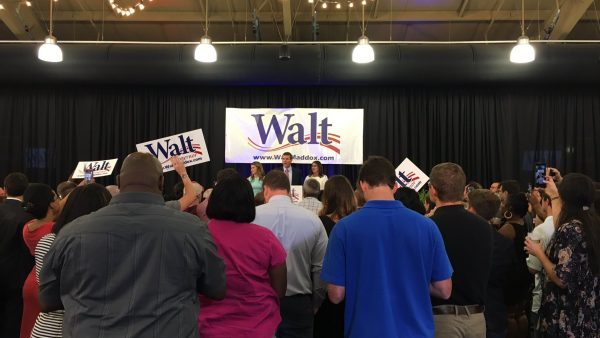 Walt Maddox kicked off the final week of his campaign for Alabama governor Monday night with a visit to Auburn University, where he spoke with students about issues pertaining to the state’s college-aged demographic.

“It’s a lot of fun being here with college students,” Maddox said after the event. “This election, unlike a lot of other elections, is going to impact them directly.”

He’d received the most feedback from younger voters, he said, about college scholarships. A central plank of Maddox’s campaign platform has been the creation of a statewide education lottery — from which he has pledged $125 million in annual funding to be allocated toward college scholarships and workforce readiness programs.

Currently, Maddox is polling well below Ivey with registered voters — which is no surprise for a Democratic candidate in a deeply Republican state. But most of his pitch to the students at Auburn reflected what he says his final week strategy is: to present himself as someone who can lead Alabama into the future — and to present Ivey as someone who will keep the state mired in the past.

“I really think the overarching theme was, we’ve been at the bottom or near the bottom in everything that matters,” Maddox said, referring to studies that have ranked Alabama as far below average in categories such as healthcare and education. “How do we come out of that?”