Will COVID Cancel Halloween? Not Necessarily. 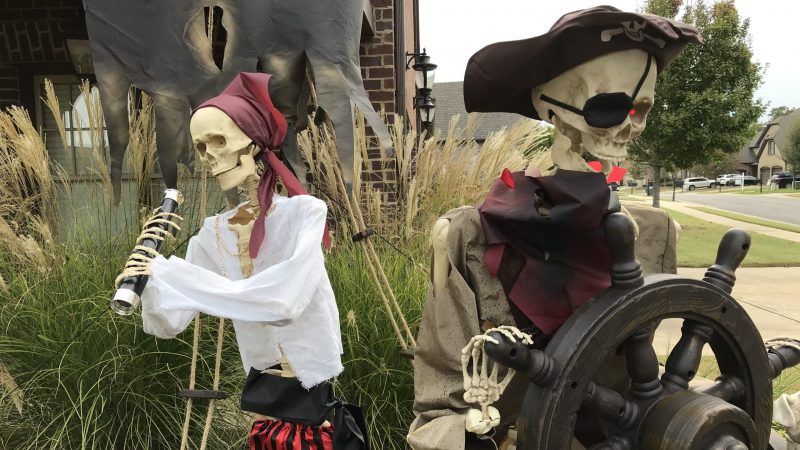 It’s a real question as the coronavirus pandemic has disrupted virtually everything across the South. A girl recently emailed New Orleans Mayor LaToya Cantrell to ask about the fate of the holiday. The mayor went on the record at a recent press conference.

“We’re not cancelling Halloween,” Cantrell said. “It will move forward, slightly different. However, we will be moving forward.”

Still, families everywhere are scrambling to figure out how to make it safer to celebrate.

The Halloween display in front of Jason Noah’s Hoover home keeps getting bigger each year. This year, a pirate ship piloted by skeletons sails out of the flower garden.

“We have fog machines in the flowerbed as well, so at night the fog comes out,” Noah said.

Fake tomb stones dot the flower bed and another pirate skeleton sits on a barrel, leaning a little bit. Perhaps the bottle in his hand has something to do with it.

Halloween is a big deal in Noah’s neighborhood.

“The first year that I was here we started out in the house with the door closed,” Noah said. “By the end of the night we were sitting outside with the door open just because there was so much traffic. So it gets to be pretty busy.”

Noah estimated 300 people come by on typical Halloween night. During a pandemic, crowds like that are a “no-no.”

Across town, Shilpa Gaggar began having misgivings this summer as Alabama’s case counts surged. She and her husband work in medicine and see the effects of the pandemic firsthand.

“There’s no way that things were going to be under control enough for us to have what you would consider a normal Halloween,” Gaggar said.

But her kids insisted and she’s right there with them.

“I’m determined,” Gaggar said. “It’s my favorite holiday and there’s going to be some way that we can celebrate this.”

Public health officials say those big trunk-or-treat events and large indoor parties are high risk and shouldn’t happen. But according to LouAnn Woodward, the dean of the University of Mississippi School of Medicine, trick-or-treat can happen safely by following the recommendations we’ve heard throughout the pandemic such as washing hands, wearing masks and maintain social distance.

“All those things would be extra important,” Woodward said.

The Centers for Disease Control and Prevention also recommends following a one-way path, with individually wrapped bags of goodies that kids can grab without getting too close.

Noah plans to skip hanging out in the yard with neighbors. People in Gaggar’s neighborhood have talked about putting candy bags on tables at the end of driveways.

“Even if you have a little bit of clustering, if everybody is wearing masks, that should kind of counteract some of that,” Gaggar said.

Louellen Berger has become something of a local legend in New Orleans. In 2003, she put a single skeleton outside her home. Since then it has grown more than 80 pun-infused displays with names like “Scary Poppins” and “Little Dead Riding Hood.”

Back in April, Berger knew several people who died or became seriously ill from the virus, and a lawn of skeletons seemed insensitive. Plus in recent years, tour buses started stopping by to take in the sight.

“So we do have very large crowds,” Berger said. “I didn’t want to be responsible nor liable for passing on COVID if that be the case.”

She cancelled the display this year. But a few weeks ago, while dwelling on the disappointment, inspiration struck. With the help of her church’s music director and a nod to the musical Hamilton, she created an online video.

In the end, Berger put up three skeletons. The original one, plus two based on the musical. It’s a far cry from the usual spectacle. But that distance from tradition has become the norm for celebrating in a pandemic.