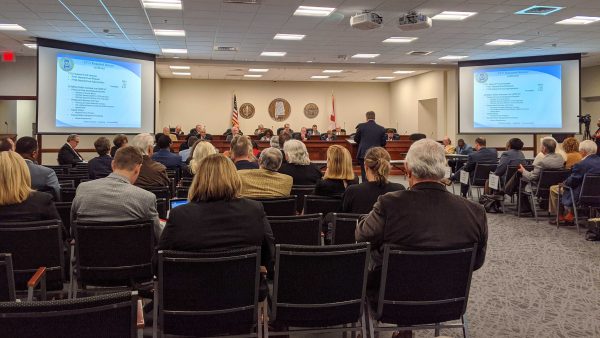 Officials from the Alabama Department of Corrections and the Bureau of Pardons and Paroles presented their budget proposals to lawmakers Thursday ahead of the upcoming legislative session.

The agency is under pressure to reform its prisons, which are among the most violent in the country, significantly overcrowded and understaffed. During his presentation, Dunn said the department has made progress in the past year but “challenges still remain.” He said the rate of violence was again “unacceptably high.” Staffing, he said, is a main priority.

“There is a direct correlation between overcrowding and understaffing,” Dunn said. “And so the best thing that we can do is to, as fast as we can, accelerate the on-boarding of new correctional officers, which we are doing.”

Last year the legislature approved a budget increase for the DOC to hire an additional 500 correctional officers. Dunn said as of November 2019, they have seen a net increase of 255 security staff. The department is under a court order to hire a total of 2,200 officers by 2022.

Dunn said they are also “closely monitoring” the recent increase in the inmate population, which went up by 1,100 inmates last year. Lawmakers expressed concern about this trend, which many attribute to a significant decline in the number of inmates being granted parole.

In his presentation to lawmakers, Charles Graddick, director of the Alabama Bureau of Pardons and Paroles, said curbing the inmate population is not his agency’s responsibility.

“I want to make it clear,” Graddick said, “we’re not the outlet to relieve the overcrowded conditions of our prisons.”

Gov. Kay Ivey appointed Graddick last year to lead the bureau and “fix the department,” according to Graddick. Since then, the number of parole hearings has sharply declined, as has the number of inmates who were granted parole. In a recent report, the ACLU warned that current parole rates could lead to a dramatic increase in the inmate population this year. During Graddick’s presentation, Republican state Sen. Cam Ward said the trend could lead to federal intervention.

“If we stay on the current track we’re on right now … we’re going to be on receivership,” Ward said.

Some lawmakers requested more information about the criteria being used to grant or deny parole.

“I’m afraid … that you all are actually re-trying cases all over again for people who’ve served their time,” Democratic state Sen. Bobby Singleton said.

Graddick said he does not control the parole board, but he supports their recent decisions. He said board members must follow the law and use “common sense.” Graddick also said inmates coming up for parole often do not meet criteria for early release.

“I’m not here to point fingers at Corrections,” Graddick said. “But most of them (inmates) don’t have the appropriate training and programming and treatment and home plans and things that are required to be considered for parole.”

Graddick said the bureau faces several challenges of its own, with probation officers struggling to manage heavy case loads. He requested an additional $11 million for the bureau’s 2021 fiscal budget to pay for supplies and additional staff.

Lawmakers pressed Graddick for more information and repeatedly asked about communication between the state Bureau of Pardons and Paroles and the Department of Corrections.

Commissioner Dunn said he couldn’t comment on Graddick’s presentation, but he said ADOC is working to offer incentives to inmates who want to participate in available programs. He also said ADOC plans to increase access to vocational and educational programs with its 2021 fiscal budget.