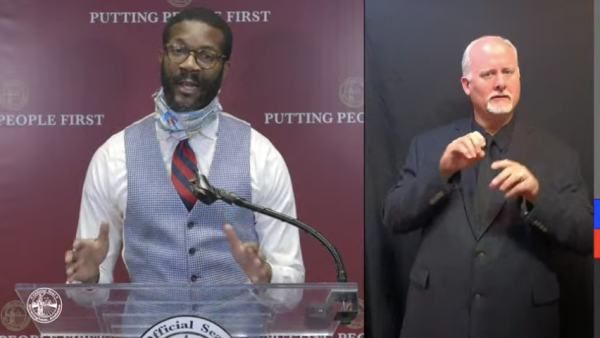 Earlier Thursday, the Birmingham City Council approved a daily curfew from 10 p.m. to 5 a.m. that will go into effect Thursday night and last through May 15. The curfew will replace the citywide shelter-in-place ordinance that was set to expire Thursday. The other ordinance, passed on Tuesday, requires residents to wear face coverings in public. It goes into effect Friday, May 1.

At a press conference Thursday, Woodfin said the new legislation is meant to help residents stay safe as some retail stores reopen and employees return to work.

“As we begin a slow and measured reopening retail statewide,” he said, “it is important to remember the risks of this pandemic still remain with us. These actions are not designed to restrict, but to support this reopening.”

He said people should still try to maintain six feet of separation in public, but face coverings offer a “stop-gap” when social distancing is not possible.

In a letter this week, Marshall asked the mayor to reconsider enforcing the face mask ordinance. He called the order “excessive” and said his office has been overwhelmed with calls about it.

“The enforcement of this ordinance in some instances could prove to be unconstitutional,” Marshall wrote.

Woodfin defended the order in a letter to Marshall. He said the requirement is legal and supported by state and local health officials, as well as members of Gov. Kay Ivey’s coronavirus task force.

The mayor said Jefferson County has experienced high numbers of COVID-19 cases and fatalities. He said the city needs more data on testing and tracking before further easing public health restrictions. Birmingham’s population is largely African American, a group that has been disproportionately affected by the virus. One in five residents are over the age of 60 and many people have underlying conditions.

“When you take all of that into account,” Woodfin said, “and you add that those things have not been satisfied as it relates to data on the health aspect of this crisis, we cannot afford to let up.”

Woodfin said Birmingham police will enforce both ordinances, which are punishable with a fine of up to $500 and/or a 30-day jail sentence.

Regarding the order to wear face coverings, Woodfin said he hopes people will use “common sense.” Coverings are not necessary while exercising or walking pets, and some people are exempt from the requirement altogether, including those with certain medical conditions and the homeless population.

In direct response to a situation proposed by Attorney General Marshall, Woodfin said it is also not necessary for someone to wear a face covering while working alone in an office.