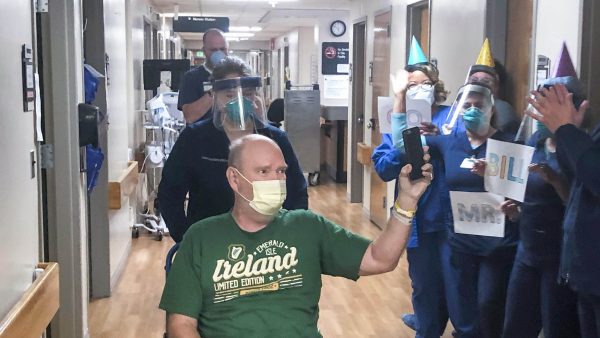 Staff at UAB Hospital celebrate as Bill Chambers is discharged after 22 days recovering from COVID-19.

The symptoms started soon after Bill Chambers returned from vacation in early March. His daughter, Meg Chambers, says family members were not overly concerned, but about a week later, his condition worsened. Bill had a high fever and was struggling to breathe.

“He could really hardly talk to me,” Meg says. “He was having a very hard time. He was just so sick and he just, you know, told me, he said ‘I’m very sick.’ And, you know, for my dad to say that, I knew, it was pretty serious.”

Sixty-five-year-old Bill tested positive for COVID-19. He was admitted to the Intensive Care Unit at UAB Hospital and placed on a ventilator.

Meg says everything happened quickly, followed by days of waiting. She says that was the hardest part, especially since no one could visit him.

“In a typical world, in a normal daily basis, you would still be able to see those people,” she says. “We would have still been able to go up there and be with my dad and hold his hand and talk to him. We weren’t even able to do that during this time.”

Meg says someone from the hospital called just about every day with an update. And eventually, her dad started to improve. He was taken off of the ventilator and moved to a step-down unit.

That’s where he met Kendall McFarland, a registered nurse who cared for Chambers on his last day at UAB. By then, he had been in the hospital for 22 days.

“Whenever I told him the news that he was gonna get to go home, he immediately started tearing up,” McFarland says. “And that really touched me. So I was like, you know, he has been here for a long time, away from family, away from friends, so we ought to do something a little special for him.”

Staff donned party hats and lined the hallway to cheer for Chambers as McFarland wheeled him out of his room. McFarland says the best part was when Chambers saw his fiance waiting for him outside.

“We walked him out the door, she was just standing there and she just immediately broke down,” McFarland says. “And she came running up to him. She asked if she could hug him and then they just embraced for, what felt like, five minutes. That put everything into perspective. It made the whole process, all of the hard work that we do, completely worth it.”

After leaving the hospital, Chambers spent a few days in rehabilitation. His family says he is now back home resting and regaining his strength.