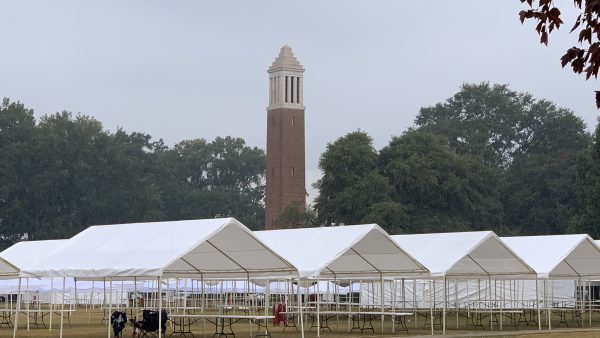 The University of Alabama prepares for game day in Tuscaloosa and the visit of President Donald Trump.

It’s a big weekend in Tuscaloosa. The Alabama Crimson Tide and the LSU Tigers, the top two teams in college football, will clash at Bryant-Denny Stadium. On top of that, President Donald Trump will attend the game. WBHM’s Andrew Yeager spoke with Tuscaloosa Mayor Walt Maddox about preparations for the weekend. He says the president’s visit means an extra layer of logistics on top of the regular game-day routine.

How is Tuscaloosa preparing for President Trump’s visit?

“I can’t go into specifics of the security preparations, but it requires more additional staffing to be able to meet the metrics that’s set out by the Secret Service and protecting the president of the United States. It requires more personnel because there’s an added level of security that’s required both internal at the stadium and external from it. In terms of just overall logistics support from making certain that your streets are clean, that the garbage is picked up, that certain infrastructure assets are tied down and inspected in advance of the president’s visit – it’s all hands on deck. Where normally we would have 500 people working in an operational window of about 48 hours, we’ll likely have 750 to 800 people working during that same window.”

Will regular game-day goers notice anything different since the president is there?

“Yes, security will be much tighter. It’ll likely be a longer wait going into the stadium. Certain parking areas of the city that are normally open may be restricted. Traffic outlets that are normally in use may be closed. And what [the city of Tuscaloosa is] doing – both us and the University of Alabama is encouraging everyone to come an hour earlier, be patient and understand that things will move rapidly. It doesn’t happen often, and it’s an honor to have the president. And we just need to be flexible with this event.”

Is there anything that concerns you about this upcoming weekend?

“I was concerned before the presidential visit and it’s always the safety and security of those who are attending the game. We live in a world where bad things happen. And there are evil actors and we’re always vigilant against that. But in a … really in one twist, I do think having this higher level of security will make the event safer.”

Tuscaloosa is used to having a lot of eyeballs on it in the fall on game days, but with this extra level with the president visiting, what does that mean for Tuscaloosa as a city?

“I believe that number one, it showcases just how good we can be. Most cities in the United States could not take on, regardless of size, 125,000 people coming into their community over a 24 to 36 hour window while simultaneously hosting the president of the United States. We will be able to do this because of the outstanding public servants that we have working in the city of Tuscaloosa, the partnerships that we have with UA, sheriff’s office and Northport, and the patience and flexibility of the vast majority of those who are going to come into this city. This is an unbelievable opportunity for our city and for our state, and I know that with the presidential visit comes ample opportunity for political discussion. But I believe that sometimes we have to rise above the person and reflect on the office itself. And to have the office of the presidency come into your community – whether you’re a Republican or Independent or Democrat – that is a good thing for your community now and into the future. And Tuscaloosa’s proud to host President Trump this weekend.”