Want to Create a Language? Here’s the Guy who did it for “Game of Thrones.” 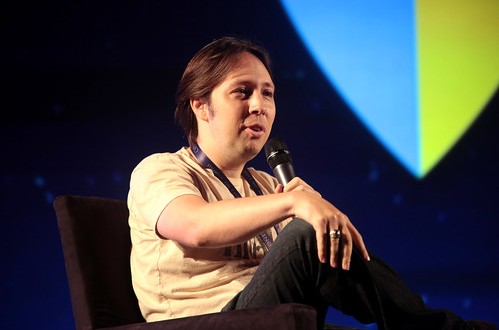 David Peterson speaks at the 2017 Con of Thrones in Nashville, Tennessee.

For most people, this is indecipherable:

But fans of the HBO series “Game of Thrones” might recognize it as Dothraki, the language of a nomadic, warrior people. (The phrase means “Go walk with your mother!” It’s an insult.) David Peterson created the language, one of several he’s developed for television shows. Peterson is an enthusiastic “conlanger” or language creator. He spoke Thursday at UAB.

Peterson says creating a language for television or film starts with conversations with the producer or director to figure out several key questions.

“Who is speaking the language? Who is going to be using it? In what context?” Peterson says. “And approximately what’s the effect, what’s the impression that the producers want it to have?”

Peterson says producers are mostly concerned with how a language sounds or how writing looks. He then prepares a short sample, a sentence or two without meaning, for their approval.

“Once they have a sound that they’re happy with, then I set about creating the language,” Peterson says.

Designing the language’s grammar and lexicon, or words, is mostly up to him. He builds words by imagining the speakers’ culture. That means more questions.

“Who are these people? Where are they from?” Peterson says. “What’s their daily life like? What are they like when we don’t see them on the screen? … Do they borrow words from other people?” Little by little the language forms.

Developing Dothraki was different because “Game of Thrones” is based on books by George R. R. Martin and includes Dothraki words. Peterson took those 56 words, mostly names, as source material for the language. He was pleased to find there was consistency among the words and it wasn’t just modified English. He built from there.

“When I’m done creating this language it looks like George R. R. Martin used my language in the books rather than the other way around and that was the goal,” Peterson says.

Another goal is to make created languages sound realistic, which is tricky because natural languages evolve over many years and have exceptions to nearly every “rule.” Peterson says he’ll develop a fictitious history for a language as a guide for that evolution. From there, he can target sounds, grammar and meanings to emulate what happens naturally.

Creating a language takes time, too. Peterson says he’ll work for about six months before presenting it to other conlangers, and after that there are more revisions.

“Usually it takes a year or so for me to feel pretty good about a language,” Peterson says.

Hollywood doesn’t necessarily work at that speed. The shortest amount of time Peterson was given to develop a language was two weeks.

When Words Hit the Screen

Peterson says when he created Dothraki, he imagined being the next Marc Okrand, who created Klingon for Star Trek.

“[I would be] assailed by fans and go to conventions for the Dothraki language,” Peterson says. “That never really happened.”

He says as the popularity of “Game of Thrones” grew, millions of people knew what Dothraki was. But few people actually wanted to learn the language. The reception was different for a language Peterson created for the CW show “The 100” called Trigedasleng. Fans latched on.

“It has its own Slack group where there’s probably over a thousand people on it now and people just talk about the language, use the language. That was really something. I was like, wow, so this is what it’s like,” Peterson says.

As much fun as creating languages is for Peterson, having his work on display publicly adds another element of joy. The words he’s created sparks memories.

Hearing those words from the mouth of a character, the memories flood back.

“For me it’s like looking at old pictures,” Peterson says.

Peterson has created at least 50 languages.

Besides creating languages for “Game of Thrones” and “The 100,” he’s also worked on Syfy’s “Defiance,” NBC’s “Emerald City” and Marvel’s film “Thor: The Dark World.”

The name was a combination of David and Megan, his then-girlfriend. He calls it an embarrassing failure.

“I created it to be used in the real world, but I also created a bunch of fantasy vocabulary, which it didn’t really need,” Peterson says. “I wanted it to be easy to learn so I made it very regular, but then I was learning things in my linguistics classes so I threw in a bunch of really difficult complex stuff just because.”

“[Megdevi] had absolutely no purpose,” Peterson says. “It served too many masters.”

Peterson hates articles, as in “A” or “The.”

“They are never used the same in any two languages,” Peterson explains. Even related languages such as Spanish, French and Italian use them differently.

It even gets complicated within the same language. In English, for example, you say “on the other hand” not “on other hand” or “on a other hand.”

“Even if you’re the language creator … you’ve got to remember it,” Peterson says. “It’s just a disaster. I hate it.”

Hawaiian is his favorite natural language

Peterson calls it beautiful. While he knows its grammar, he’s never had a chance to learn it.

Peterson has many favorite created languages, but …

He’s especially intrigued by the work of Sylvia Sotomayor, creator of a language called Kēlen.

“I think hands down she’s probably the best language creator on the planet right now,” Peterson says. “Her stuff just blows me away.”

A bonus for Star Trek fans

An episode of “Star Trek: The Next Generation” called “Darmok” has fueled discussion among fans and linguists for years. In the episode, the crew encounters an alien species that only communicates in metaphors or allegories. Peterson says no, you can’t have a language that’s just metaphors and, yes, the universal translators were working.

Listen for Peterson’s commentary on what was actually happening in the episode.