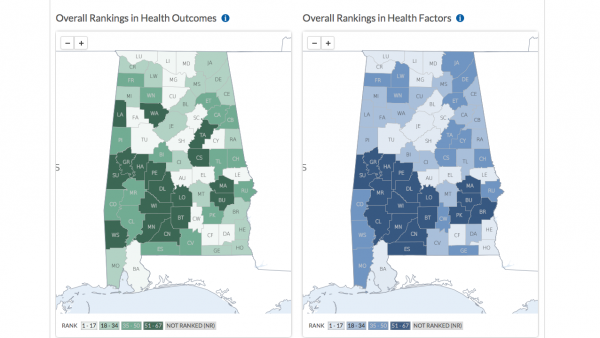 A report out Tuesday published by the Robert Wood Johnson Foundation and the University of Wisconsin’s Population Health Institute ranks the health of all 67 counties in Alabama.

Researchers used data from more than 30 sources to analyze health outcomes across Alabama. This year, Shelby County comes in first. Jefferson County ranks in the top third. The report compares differences within the state based on location as well as race and ethnicity.

Giridhar Mallya, a senior policy officer with the Robert Wood Johnson Foundation, says the county ranking is based on a wide range of factors, such as education, violence and poverty.

“And what we can see is that the vast majority of people’s health is actually affected by things outside the doctor’s office,” Mallya says. “One of the things we focused on this year is how housing costs can affect people’s health.”

For example, in Lowndes County, which ranks last on the list, almost 20% of households spend over half their income on housing. Mallya says this leaves less money to cover health care costs.