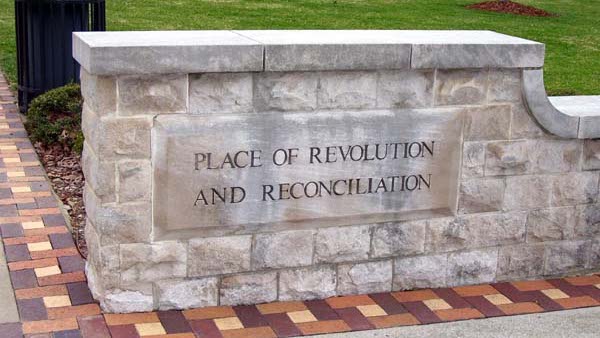 Words written in stone in Birmingham's Kelly Ingram Park note the city's history with the civil rights movement. The proposed Global Forum for Freedom and Justice would sit just north of the park.

Part of Birmingham’s identity was forged by the civil rights movement. A proposed development would build on that history through an internationally-recognized leadership center. The Global Forum for Freedom and Justice would be a major addition to the Birmingham Civil Rights District. The $40 million proposal is the brainchild of Washington, D.C. philanthropist Wayne Reynolds, and it’s generating skepticism in some parts of the community. WBHM’s Andrew Yeager spoke with Birmingham Business Journal editor Ty West about the plans.

What the forum would be:

“He wants to create a forum that would kind of leverage the city’s historic legacy of civil rights, create an international gathering place that’s focused on leadership, education, innovation and understanding. So this would include everything from a partnership with a major university that would house about 1,200 students there, probably getting master’s degrees, to basically being a place where people could come visit. It’s not really a museum as much as it is a place where you would come, learn from global civil rights leaders and go away with an idea of how to take that back to your home and become a leader yourself.”

Reaction in the Birmingham community:

“It’s being received, I would say, with caution. At the meeting [of Birmingham community leaders] on Tuesday there were some questions about what would this mean for the Birmingham Civil Rights Institute. I think there’ve been questions about what this could mean for churches and historic sites like 16th Street Baptist Church. I think with the Civil Rights Institute, [Reynolds] was very clear in his remarks that we’re not meant to be a competitor. I think he views this, at least in his mind, as this is a complementary asset.”

“Right now there’s not a firm timeline. The next step that he addressed during the meeting was, we want to go out, we want to have communication and we want to continue to kind of spread the word and both clear up some of the misconceptions in their mind about what they’re trying to do. But also just have conversations with local leaders. I do think there is a level of excitement. I think while some people are concerned about what it would mean for this area or that area, I did get a lot of excitement. I just think they want to make sure it’s done in a way that has consensus in the community.”