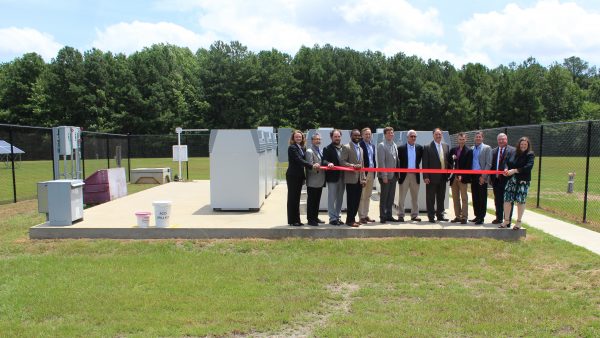 Officials from groups including Southern Research, Southern Company and the U.S. Department of Energy gather to officially open the Energy Storage Research Center.

Energy officials from around the country gathered Tuesday on the campus of Southern Research (SR), a Birmingham nonprofit specializing in science and technology, to celebrate the opening of the state’s first Energy Storage Research Center.

In his opening remarks, Corey Tyree, SR’s senior director of energy and environment, told the crowd of company executives, engineers and scientists that the center represents a new era.

He said energy storage is the “key to unlocking” the potential of renewable power such as wind and solar. Being able to store that energy ensures it will be available to meet customer demand, even on a cloudy day with no breeze.

The research center will enable technology vendors and users to test out large-scale energy storage applications in an effort to improve the process and make it more cost-effective. The facility contains big, expensive batteries that can connect to Birmingham’s power grid, which, according to Tyree, is key for research.

“This center’s about doing due diligence and making sure this technology works before it ends up on the real grid,” he said.

Tyree said the facility, which cost several million dollars, is a collaborative effort, funded by groups including Southern Company, the U.S. Department of Energy, the Electric Power Research Institute and the state of Alabama.