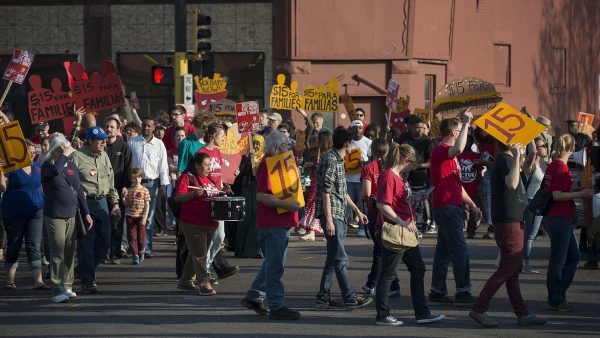 The 11th U.S. Circuit Court of Appeals heard arguments Tuesday in Birmingham’s long-running attempt to raise the minimum wage.  The federal minimum wage is $7.25 an hour.  Alabama is one of five states, all in the Southeastern U.S., that has not adopted a state minimum wage, according to the National Conference of State Legislatures.

Several years ago, the Birmingham City Council approved a city minimum of $10.10 an hour.  Before it could be implemented state lawmakers blocked the increase by passing a law that requires all Alabama cities to have the same minimum wage, regardless of size or cost of living.  Some state lawmakers argue a higher minimum wage for Birmingham would hurt the state’s overall economy.

The legislature was predominately white and the Birmingham City Council was majority black.  Last summer, a three-judge panel said in its ruling that the “plaintiffs have stated a plausible claim that the Minimum Wage Act had the purpose and effect of depriving Birmingham’s black citizens equal economic opportunities on the basis of race.”

The case being argued this week in front the 12-judge 11th Circuit panel is reportedly the first in the country to challenge so-called preemption laws as being racially discriminatory.  State Attorney General Steve Marshall, who is named in the lawsuit, says allegations about a state’s history and the race of its legislators are not enough to call into question the state’s motives when it passes standard economic legislation.

Antoin Adams, one of the plaintiffs, says minimum wage workers like him can barely get by on $7.25 an hour in Birmingham. Adams took a fast food job after high school instead of going to college.

“I’m still scraping by,” Adams says. “I don’t always know where I’m going to stay at night, let alone how I would even pay for college or rent.”

Johnathan Austin was president of the Birmingham City Council when it approved the wage increase.  He also recently completed law school.

“Whatever the outcome will ultimately be, I certainly hope that the mayor and the current council will fight for the right of the citizens of Birmingham to earn a livable wage,” Austin says.  He notes that some Birmingham employers have increased their minimum pay in recent years, a move he says shows support from the business community.

On Tuesday, judges on the 11th U.S. Circuit Court of Appeals questioned whether the lawsuit was properly filed against Alabama’s attorney general.  The case would be thrown out if the judges determine the plaintiffs sued the wrong party.