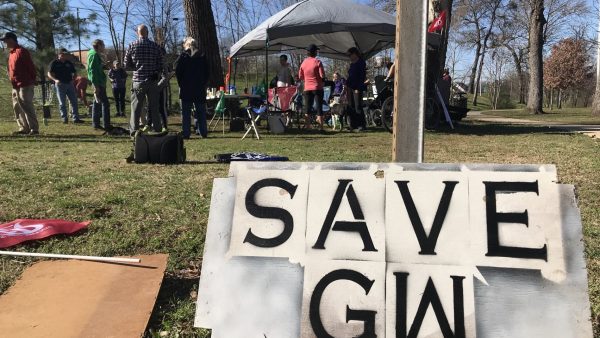 Opponents to the youth baseball academy proposed at George Ward Park gathered there recently for a protest. They say the development will displace regular users of the park.

The Birmingham City Council delayed a scheduled vote Tuesday on an agreement  for a Major League Baseball-supported youth academy in the city. The program was planned for George Ward Park, but the council passed a separate resolution asking the park board to consider other locations.

The project would train more than 1,500 young people to play baseball and softball, but the debate has grown contentious. Opponents say the city shouldn’t take away a park that residents use heavily.

“I think everybody needs to come out of their corner, come sit down at a table, listen to each other, put the factual information out there,” he says. “You may not agree, but the language needs to change.”

Adult softball and disc golf teams are among those who regularly use the park. They say they would be displaced by the youth program. Some Glen Iris residents near the park also oppose the plan. But others say children should be the city’s priority.

Councilwoman Crystal Smitherman says the council should look at the program objectively for the benefits it brings not only to athletics, but also academics. The proposed academy would include ACT and SAT preparation and other support in science, technology, engineering, and math.

“There are some high school athletes who cannot get into college because their ACT scores are too low,” she says. “This is for the future.”

Councilman William Parker says the different sides are close to finding common ground. He expects to have a vote on the agreement at next week’s council meeting.