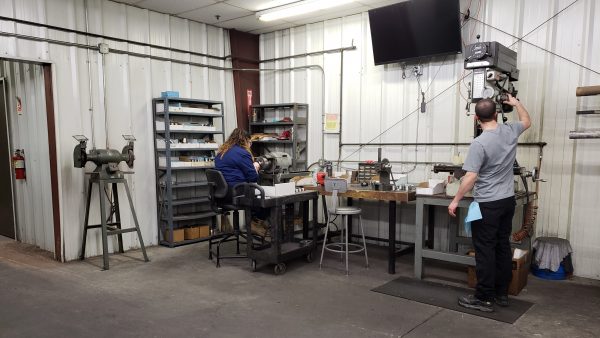 A big portion of Greater Birmingham’s workforce is low-skilled jobs. So companies looking to fill more technical positions at factories and plants often struggle. One approach Birmingham is trying is to get more people into apprenticeship programs. Companies hope to fill more jobs, and also take advantage of some financial incentives.

Joe Rauls graduated from Thompson High School in Alabaster a year ago, and he really did not know what he wanted to do after graduation. So when he found out about an apprenticeship opening at SEPCO, a sealing equipment company near his home, he jumped on it.

Rauls spends his days finishing sealing parts that go into sealing systems. At night, he takes classes at Lawson State Community College where he learns how to work with different equipment. His days are long.

Apprenticeships help people take these hands-on skills they learn in the classroom and apply them to a specific job. It’s similar to an internship but longer — three to four years. And companies often guarantee a position at the end of an apprenticeship.

At SEPCO, apprentices, like Rauls, work towards being CNC machinists. They learn computer programming to control heavy machinery that cuts into metal to create different parts.

Chris Wilder, CEO of SEPCO, says because of the specialized skill-set the job requires, there are not enough people to fill open positions. Other industrial companies in the area have reported similar problems.

As a result, Wilder says finding employees is a challenge, so they usually run a person or two short. But Wilder says the company is now trying apprenticeships.

“Getting a little more integrated with being involved in the training on the front end in helping to build our own skilled employees would benefit both us and them in the long run,” he says.

The apprentices benefit in that the company covers their tuition at Lawson State and the cost of tools and supplies. SEPCO gets to train people who will make up its workforce for these hard-to-fill jobs. Wilder says after having four apprentices for a year now, he sees the good work they put into the company.

Officials with the city of Birmingham say it is good for them too. Mayor Randall Woodfin described apprenticeships as “an important pathway to opportunity.” And the Birmingham Business Alliance reminds companies that Alabama offers a tax credit of $1,000 per apprentice.

Waymond Jackson, vice president of workforce development for the BBA, works with the city to connect companies and apprentices.

“One of the challenges with today’s economy is a tight labor market,” Jackson says. “So companies that are implementing programs such as apprenticeships are really taking a step forward to develop their own pipeline.”

Jackson hopes to establish apprenticeships with more companies to help fill job demands across the region.