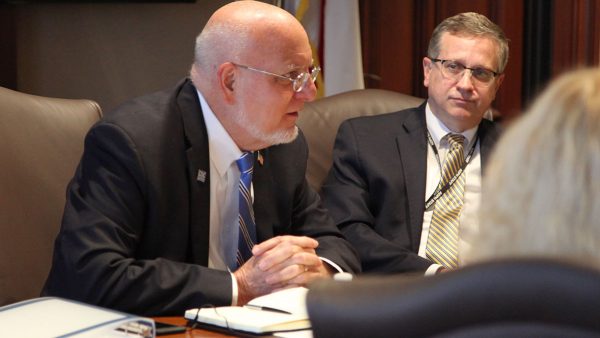 The director of the Centers for Disease Control, Dr. Robert Redfield, met with public health leaders in Montgomery on Friday to discuss strategies to combat HIV and tour a clinic that provides health and wellness services to people with HIV/AIDS, Hepatitis C and other life-threatening illnesses.

Thank you to CDC Director Dr. Redfield and so many of our rural health colleagues and representatives of the media for joining us @MAOofAlabama today for a tour of MAO’s clinic in Montgomery. pic.twitter.com/WYhBgpJXcP

Earlier this year, the Trump administration announced plans to invest more than $290 million to end the HIV epidemic by 2030. Alabama is one of seven states that will receive money through the proposal.

“Alabama is one of the states where its major HIV acquisition is in a sense more complicated,” Redfield said during a press conference, “Because it’s in a rural environment.”

According to data from the CDC, Alabama had the nation’s 11th-highest rate of new HIV diagnoses in 2017. Approximately one in six residents infected with the disease are undiagnosed. Redfield said one challenge is combatting a higher level of stigma in rural communities. He said state leaders have to “normalize” HIV so people feel comfortable getting tested and treated. He also noted the need to reach young black and Latino men.  According to the Alabama Department of Public Health, more than 70% of people recently diagnosed with HIV in the state were black.

“We don’t need to develop an initiative that keeps doing what we’re already doing,” Redfield said, “which hasn’t reached the individuals that we’re trying to reach.”

Today, I learned from #Alabama public health officials and researchers, how @CDCgov can better diagnose those living with #HIV, treat their infections rapidly, protect those at risk, & respond rapidly to growing HIV clusters. #EndHIVEpidemic pic.twitter.com/JXwGW4RiVe

Nationwide, the goal of the Trump administration is to reduce new HIV infections by 75 percent in five years and by at least 90 percent in 10 years. It’s part of the administration’s 2020 budget, which also includes budget cuts for programs that fund treatment of HIV overseas.